This year's Halloween marked a first: I didn't go out trick-or-treating with my 3-year-old son, John. I was really tired and had a lot to do, so Peter took him out, which is all John wanted anyway (he loves his Dad more than anything!). I also missed the ward Trunk-or-Treat and some other fun things last weekend due to being sick. Oh well. I guess there are many more Halloweens to come!

In the afternoon, John's friend Sami was over to play. They had a blast playing chase for awhile. As a result, John was really tired when it was time to trick-or-treat a few hours later. But they sure did have fun! We also baked and decorated Halloween cupcakes. They were so good, if I do say so myself. I love cupcakes! 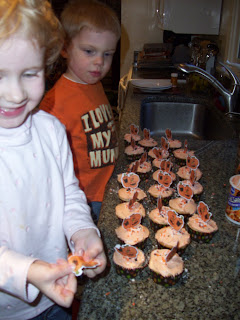 After dinner, dessert was "ghost cake." Isn't his Halloween shirt cute? It says "I Love My Mummy" and it glows in the dark. 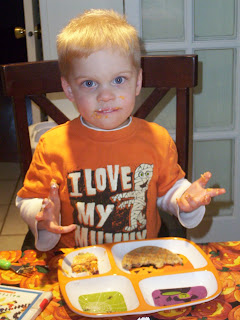 All dressed up (as a dragon, not Barney!) and ready to go. Even though he'd been very excited for this night for weeks, he was really tired, hence the dazed look on his face. 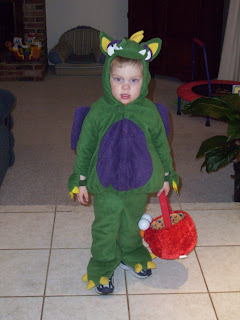 Side/back view of my little dragon. I got this costume at oldnavy.com at the beginning of September. I like to get costumes early while the selection is still good. 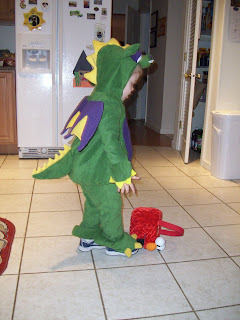 Before they left we practiced proper Halloween etiquette: ring the doorbell, say Trick-or-Treat, and then say thank you. How well he actually did this, I'm not sure! 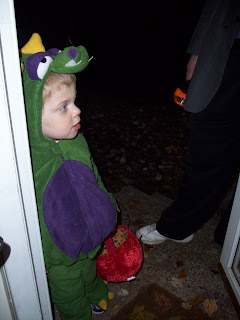 Home again, with the spoils. What in the heck are we going to do with all of this candy? 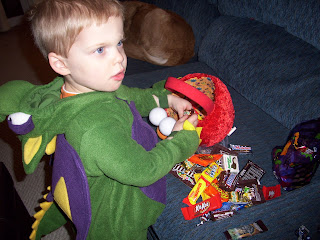 Yesterday my friend Alyson and I went up to the witchy town of Salem, Massachusetts for the day, which made up for my kinda boring, sickish Halloween week. I'll write about that next time. It was a lot of fun!
Posted by Donna at 6:43 PM