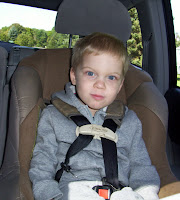 The scariest thing that has ever happened to me as a parent just happened a little while ago. My 3-year-old son, John, was missing! It was the most terrifying, helpless feeling I've ever had. I thought I'd be spending this evening talking to the police and frantically searching for my son, with Peter flying back early from his business trip on the West Coast as a result of my total ineptitude as a mother, but fortunately, those things won't be happening...

My friend Marci was over this afternoon with her two sons. After awhile we noticed that John and Ben (he's also 3) were being really quiet, wherever they were in the house. I went upstairs to check on them, and they weren't there. They weren't in the basement. They weren't anywhere in the house. They weren't in the backyard. They weren't in the car. Panic really started to set in as all sorts of horrifying scenarios ran through my head. Where could they have gone?
Marci ran up the street to her house, and they weren't anywhere in the front or back yard. By this point I was feeling queasy, faint, scared, and totally mystified. Where could they have gone when they were right there in the house with us? I've always known exactly where my boy is, but now...no idea. There was no sign of them anywhere. Marci checked inside of her house in case they'd somehow gotten in, and...Bingo! They were down in the basement getting into the hot glue gun supplies(!!). I've never felt such overwhelming relief in my life!
Somehow, these two 3-year-old boys who can barely carry on a real conversation with each other had teamed up and silently left the house together, walked up the hilly, steep street, went around to the back of Marci's house, pulled the heavy sliding glass door open and closed, and played in various rooms on each floor of the house (as the evidence showed). John did this barefoot in chilly weather, with no coats on either of them. He had some scratches on the side of his forehead that we'll never know how he got. He was very quiet when I got to him. The boys seemed to know they'd done something wrong, but they didn't really understand what. They'd never done anything like this before. And they never will again, if we have anything to do with it!
I'm so happy to have my son back. I unfortunately now have a little taste of what parents go through when their children are missing. It's pure terror, and I hope I never experience it again. I got a big stress headache from the whole ordeal that I know won't be gone until I wake up tomorrow morning, but I feel like I deserve it for not being more vigilant. I learned my lesson: lock the kids in the house on playdates, no matter what! You can bet I will be doing this for the rest of my life whenever young children are in my house!
Posted by Donna at 6:30 PM