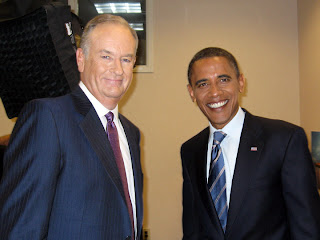 I like and respect both of these men, but guess which one's my favorite? (Hint: I watch his show on Fox News Channel almost every weeknight.) I've been watching the Bill O'Reilly interview with Barack Obama, and I've found it very helpful in trying to figure out what I think about Obama. As an undecided independent voter, I like these kinds of interviews because they will hopefully help me to make the most informed choice that I can. What I've deduced from the interview is that Obama is a classic liberal Democrat on most of his positions, so a lot of his views are not views that I share. He's a heck of a nice guy though (I like his personality much more than John McCain's), and I do agree with him on some things. But he's not as likely to get my vote...although he might. Obviously, I'm still undecided. Anyway, kudos to Obama for agreeing to be interviewed by O'Reilly. At the very least it shows that he's a brave man!
Posted by Donna at 7:08 PM