Last Saturday on September 6th we hosted our second annual lobster bake for Peter's family. I didn't take that many pictures (I was busy "hostessing"), so the following photos are the best of the few I took, and they unfortunately don't include everyone. Peter's family drove over from Rhode Island (about a 90-minute drive for most of them) and brought good stuff like fresh corn-on-the-cob, potatoes, and desserts, while we supplied the lobsters, mussels, and clamcakes for a mighty good end-of-summer feast.

Cooking the seafood required special pots that are best used outdoors. The grill was used to cook steaks for the non-seafood lovers (crazy people that they are! I love a good steak but lobster is a rare treat). Peter is in the blue shirt and that's his brother Paul. They do have a sister, but her name is Ruth, not Mary. (ha ha) 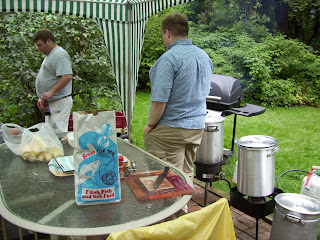 John liked the lobsters. I felt so bad that they were going to be dead and on our plates soon. Despite my guilt, they tasted very, very good. They had a lot of meat on them this year. 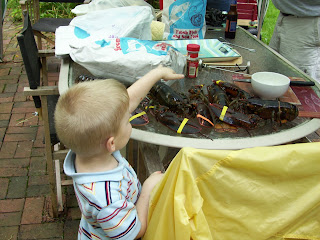 With Uncle James (Peter's step-brother), and a lobster that John took a special liking to (which didn't help my guilt!). 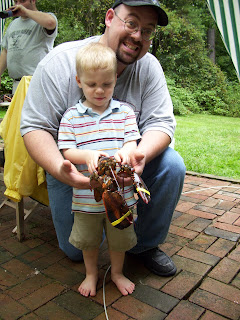 The mussels were so delicious. The bowl of melted butter is for dipping them in. This picture makes me crave them all over again. 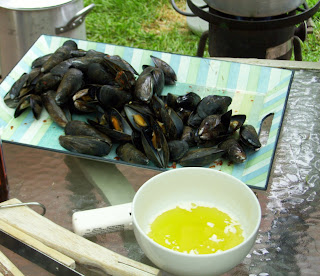 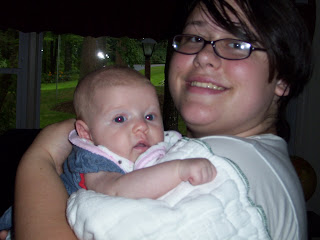 John and Andrew, cousins and look-alikes! 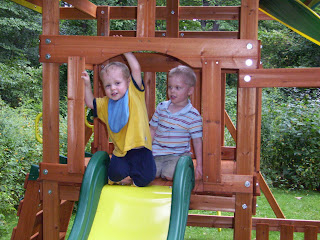 We got this swingset at the end of June. It took a whole day to assemble, but it's been worth it! The kids have such a fun time on it. 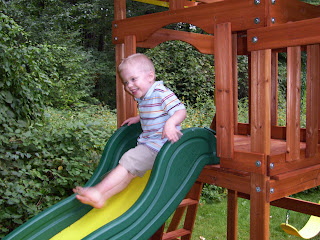 It was a fun day!