Really Gross Discoveries in My House This Morning

(Don't read this if you get easily sickened by reading about gross things. I'm not joking!)

My morning today was going just fine until I went downstairs at about 8:00 a.m. I noticed in the entryway that the shoes in the boot tray were askew, and that the closet door was open a few inches, so I figured that our two cats must have been chasing each other around and playing during the night. Then I went into the kitchen, where the rug in front of the sink was folded over in half. As I unfolded the flipped-over side, there it was. A small, gray bloodied little object hidden in the fold of the rug. I knew instantly what it was without looking too closely as I yelled for Peter and ran upstairs. It was a mouse head! On my kitchen rug! So gross! That's what the cats had been doing during the night--catching, maiming, and killing a mouse.

You would think that would be enough, but the ordeal was not yet over. Peter came down and took care of it, and I tried to go about the usual morning routine, despite the unsettling turn of events. As I was unloading the dishwasher and making John's oatmeal, I looked down at the rug again, and there it was on the maroon border: a slender, bent little grayish thing, so small that we didn't even notice it at first. Oh. My. Gosh. It was one of the mouse's legs! I wanted to puke. I stayed composed, because I don't want John to get afraid of this stuff so that he can help take care of it when he's older. I attempted to pick it up with a napkin, but I just couldn't bring myself to get that close. The psychological block I have against rodents is too strong. So Peter came to the rescue again, and then he walked through the house looking for any other little body parts, but found none.

Unfortunately, there's more. A few hours later, I was sweeping in the dining room when I came upon the third and final horror of the morning: the mouse's tail. I wanted to die. I was home alone, so I had to take care of it myself. I swept it into a dustpan quickly, with my eyes averted, and disposed of it in lightning-fast speed. I had already been feeling a little queasy all morning because of these little body parts I kept coming across, and that pretty much cemented the nausea in for the rest of the day.

How could such gruesome things take place in my home sweet home? Now that the weather is getting colder here in Connecticut, the mice want to come in and find shelter. We basically live in the woods, so there are many of them around here, although you don't see them that much. They haven't been a big problem in the two years that we've lived here, mainly because our cats are really good at either making mice stay in hiding or torturing them to death if they make the fatal decision to come out. Well, I guess a dead mouse is better than a live one, right? 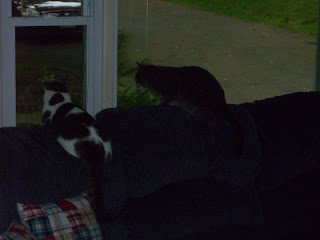