It's time to talk, er, write politics because it's been on my mind lately as the political scene has begun heating up again. In the next few weeks, John McCain and Barack Obama will be naming their Vice Presidential candidates. McCain's announcement could come as soon as this week, which would give him some attention while Obama is becoming the world's darling out in the Middle East and Europe. (What's up with that? Why is he behaving like and being treated like he's already the President?)

I think the running mate can have a significant impact on whether or not the presidential candidate gets elected, and to me, that's one of the most important roles of the Vice President before they're even in office: to help get the presidential candidate to the White House. So it usually comes down to a matter of strategy when choosing a running mate, and therefore my picks for the V.P. candidates are mostly strategic. Here they are:

1) Barack Obama should choose Hillary Clinton. A lot of people, mostly women, like her a lot and will vote for Obama in a heartbeat if she's on the ticket. It's being said that women in general are a highly coveted group for the candidates to win in this election. Some say he needs to choose a white man who is more middle-of-the-road, and that's not a bad idea, but I think an Obama-Clinton ticket would be powerful. Clinton has many, many resources at her disposal, and I think she has good, solid experience as a Senator and as de facto Vice Prez while Bill was in office. Speaking of Bill, I think he'll be on his best behavior, at least until they win. And I do think Obama-Clinton would win.

2) John McCain. Sigh. I'm going to be shocked if he defeats Obama. I don't think his running mate, no matter how good, will be able to overcome the odds McCain is facing. You all know that I was a Mitt Romney supporter when he was running. I'm still disappointed that he didn't get the nomination because it's very clear to me that he was definitely the best in the field from both parties. I think he would be brilliant as V.P., and from a strategic standpoint he would be great on the ticket when it comes to the economy, which is a major source of concern right now for Americans. But there are too many people who don't like or trust him or know him well enough, plus it would be two white men running together, which would be a direct contrast to the historic matter of Obama running. Though I've heard that McCain and Romney have been getting along well now that they're not competing with each other, I don't think it's very likely that McCain will choose him. 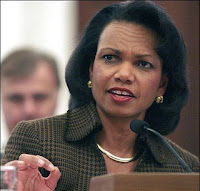 There are some drawbacks to Condi. She's strongly associated with President Bush, which isn't a good thing given his low approval ratings. Some would say that she doesn't have enough experience, but I think she has better experience than Obama. However, it's pretty unlikely that Rice is going to be chosen. She has said she's not interested in the job, and she and McCain don't seem all that "tight." It's unfortunate, but apparently true.

As for me, I'm still undecided as to who to vote for in November. I'm really interested in how things will turn out in the next few months. I could be swayed either way. I don't really like either man all that much, although there are things that I do like about each of them. I might still just write in Mitt Romney's name. Hey, I live in Connecticut, which is going to go Democratic anyway, so it doesn't really matter. If I lived in a swing state, then maybe I'd vote more responsibly.

What do you think? Agree, disagree? Who are your V.P. picks? Don't be shy; leave a comment and let your voice be heard (er, read)!
Posted by Donna at 7:15 PM