The Republicans for Prez 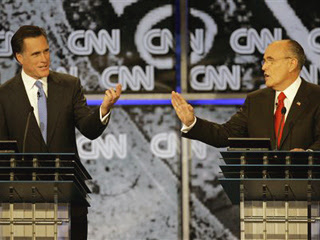 Last night I watched the CNN/YouTube Republican presidential candidates debate. All of the questions were from YouTube and some of the people/skits were pretty funny. While I still like the standard "old-fashioned" debate format, YouTube definitely livened things up, and it's a good way of getting Americans to hopefully become more interested in and involved with the election.

Before I go on, in the interest of full disclosure, I have to say that I'm on the Mitt Romney campaign. Most of you already know that. I haven't really done much for it; so far I mainly just get the campaign e-mails. But he is the man who I want to be President. I'm going to have to register as a Republican so that I can vote for him in the primary. I'm an independent, but I definitely lean to the right. My brother would say I'm all-out Republican because I watch Fox News and agree with Bill O'Reilly on most matters, but I don't think so. I don't have a problem voting for a Democrat if I think that person is better for the job. (As evidenced by my voting record--I voted for Gore in 2000 and Bush in 2004.) The balance of power doesn't matter all that much to me, I just want the best people in office no matter what their party is.

So, having said all that, here are my awesome insights about each of the Republican candidates so far. I'm putting them in the order that they were announced at last night's debate:

1. Congressman Duncan Hunter. He seems nice and smart enough, but as a candidate he's kind of forgettable because he doesn't really stand out. I don't have that much to say about him. Of the group that is left, I predict he'll withdraw from the race first.

2. Congressman Ron Paul. I think he's pretty great, I really do. My super-liberal brother Ben is even going to register Republican so that he can vote for Ron Paul. He's the most honest candidate and he seems to say exactly what he thinks and doesn't play the political game. I like how he's straightforward and sticks to his guns--he truly believes everything that he says. (In some cases, that's unfortunate, but more on that momentarily!) It's pretty cool that he was an obstetrician before going into politics, helping to bring life/joy/screaming babies into the world.

The big "but" with Ron Paul is that he's wrong about foreign policy. His views would work in an ideal world, but this world is far from ideal. His non-interventionist strategy would only let evil people attack us and others a lot more easily. And they want to get us because they are radical fundamentalists and not just because the U.S. is over in their countries. There are other "buts" about Paul too, but that's the biggest one for me. So even though he has a lot of good ideas and he seems like a great man, I really don't think he could make it work as President.

3. Senator John McCain. I've never been a big McCain fan. I saw him in person once when I was volunteering at Penn's 2001 graduation and he was the speaker. It was pouring out that day and he was smart enough to keep his speech short and sweet since all everyone wanted to do was get out of the rain. Anyway, I like McCain for his military experience. I think he would be good when it comes to that kind of thing. The rest of it, though, I'm not so sure. My biggest problem with John McCain is that I've heard several times that he has a bad temper that he doesn't control very well, he swears like a sailor, and he holds grudges and is openly rude to those who he's ticked off at. I don't want that kind of a person running the country. We need someone even-tempered and good-natured (not another LBJ!).

4. Senator Fred Thompson. I have been stumped as to the popularity of this guy. What is the big deal? I hadn't even heard of him up until a few months ago, and I follow politics regularly. That being said, he was good in the debate. He has a quick wit and good answers. His demeanor is calm and strong. But I still don't know what's so great about him and why he would make a good President. What has he done that is so special?

5. Mayor Rudy Giuliani. He was great as mayor of New York and was amazing in the wake of 9/11. I was a big Rudy fan back then. But the more I've learned about him the less I've come to like him. It's good that he's moderate and therefore might be able to reach out to both sides better, but I don't think he's very well qualified to be the President. To go from being a mayor (yes, even the mayor of NYC) right up to prez is a big leap, isn't it? Plus, I don't trust him. I don't mean to be a Bible thumper, but he cheated on his wife and left his family. I do think it matters what a person does in their private life because it shows what kind of a moral compass that person has, and one's level of personal morality can have a significant impact in politics. I also don't like his new wife Judith, and they have exhibited some downright strange behavior together in the past.

Giuliani and Romney really went after each other in the debate, and Rudy struck first, going after Romney on immigration and accusing him of employing illegal immigrants at his "mansion." He was talking about Romney's house in Belmont, Mass. and was trying to make it seem like Romney is a hypocritical, distant, super-wealthy guy who's disconnected from the general public. First of all, I have seen that house, and though it's big and beautiful, it's not a mansion, it's just a big colonial. Giuliani was exaggerating and I bet he knew it. He kept trying to say that Romney hired illegals to work at his "mansion" (the landscaping company he hired to work on his lawn had some illegals, but that's not Romney's fault or responsibility). So I was glad when Giuliani got booed when he kept trying to go on and on about it. So anyway, it just made me more unhappy with the guy. I'm worried that he's going to win the nomination, and I just can't imagine this man being our President.

6. Governor Mitt Romney. He is brilliant and articulate and accomplished, but he didn't do as well as usual in the debate last night. Some of his past and present positions on issues like abortion, waterboarding, and gays in the military made him stumble a bit.

Romney may not be the most upfront candidate, but he's far from being the most deceptive or malicious. He's just playing the political game and probably had to position himself the way that he did in order to win the governorship in liberal Massachusetts. Electoral politics really is a game, after all.

Now that some of the things he said in the past are coming back to haunt him, maybe he should have had better integrity and said what he really believed, but I have to tell you, I'm a Mormon too and in the past I went back and forth on the constitutional right to abortion issue, finally deciding that it shouldn't be a matter of constitutional rights when it comes to ending a life. So I understand his line of thinking on that because it mirrors my own. I don't think he's saying whatever he can to get elected, but he is walking a fine line, as are all of the candidates on both sides. They're all players of the game and have to be strategic in whatever they say and do. It's one of the things I hate about politics, but unfortunately it's the way it is.

Mitt Romney is a good person and I know that he would make a good President. He would clean up Washington and get it running better and that would have numerous beneficial effects. He's so good at that sort of thing. He did it for the state of Massachusetts, he did it with the Olympics, and he's done it many times in business when he's helped companies that are falling apart get back on track.

And his Mormonism should absolutely not be an issue for voters. It wasn't a factor when he was the governor, and it won't be if he's President either. Sometimes I have to laugh about some of the ignorant assumptions and reservations being made about the LDS Church. Sometimes the intolerance and lack of understanding really anger me. If it keeps him from getting the nomination I am going to be really annoyed.

Last but not least about Romney, for now, is that he would be, like, our handsomest president ever!

7. Governor Mike Huckabee. He's a nice guy, and he's making me nervous because he's been gaining on Romney. I like Huckabee, but I don't "heart" him. He seems to be honest and good, but sometimes his nice-ness comes off as preachy and too sweet for a man running for President. He's not as strong and presidential as some of the other candidates. He doesn't have the accomplishments and successes that Romney has had. But I think I'd take him over Giuliani. A Romney-Huckabee ticket could be good. Then maybe the people who are scared of/hate Mormons will vote for them since Huckabee is a Baptist minister. I don't know if those two together would be strong enough to beat Hillary though (yes, I do believe she will be the Democratic nominee. But more on that another time!). It might take Giuliani or McCain to do that (as the VP candidate, of course!).

8. Congressman Tom Tancredo. He's really into immigration and seems to be good with that, but not much else. What else has he done? I'm not sure. He's kind of similar to Hunter: likable but not very memorable, although he stands out a bit more than Hunter does. He'll probably be the second one to go.

If you've made it this far, I'm very impressed! This is my longest post ever. That happens with politics, it tends to make one either have a lot to say or nothing at all to say. I will write about the Democrats running for President sometime soon, so stay tuned.
Posted by Donna at 1:07 PM