Sam and I have a silly nickname for John that cracks us up; it's "Wrestling J." I don't know why it's so funny to us, but it is. Well, "Wrestling J" was off to a good start for his junior year wrestling season in December. After the abbreviated weird season of sophomore year (which wasn't a great season for him), and the extended break from wrestling because of Covid, we weren't sure how he'd do. We didn't have to wonder long, because he came out strong and dominant as the team's 126-pound wrestler. He won all of his matches in December except for one, and he got some good pins in too. He was off to a great start for what turned out to be a great season!

John is in the white singlet... 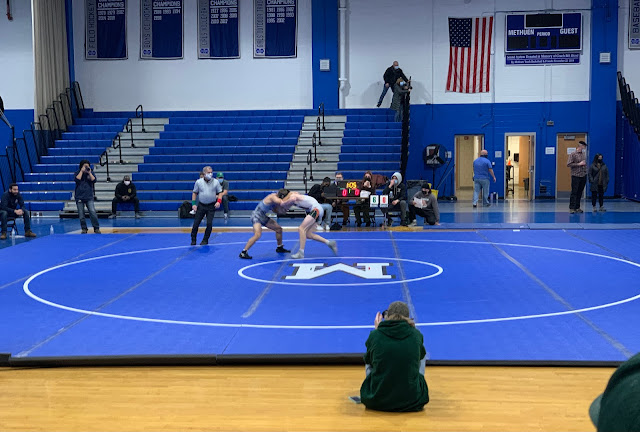 Watching a teammate's match from the sidelines. 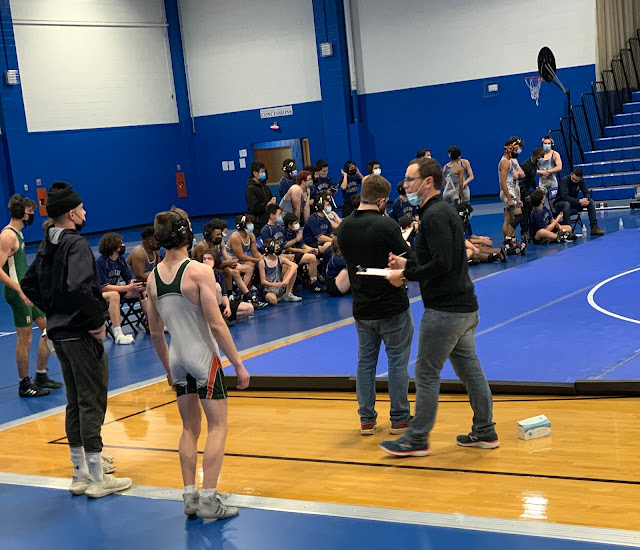 I was glad that the tradition of slapping hands with the other team was back. Sports, and life, were starting to feel more normal, despite the mandatory masks and the rise of Omicron. As I'd been saying for a long time, we just have to learn to live with this (99% survivable) virus and go on with our lives. 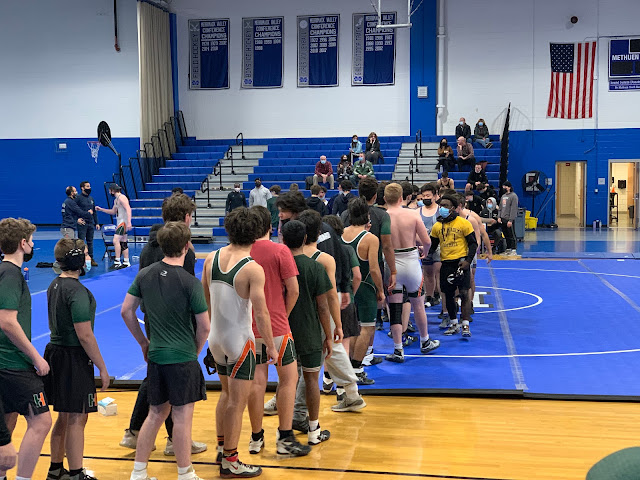 His first pin of the season! 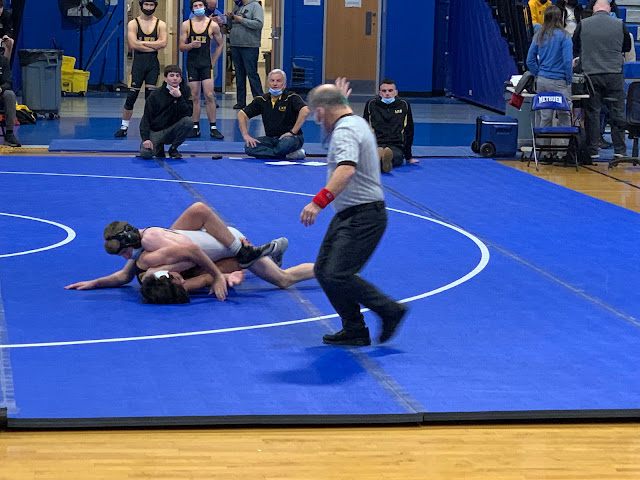 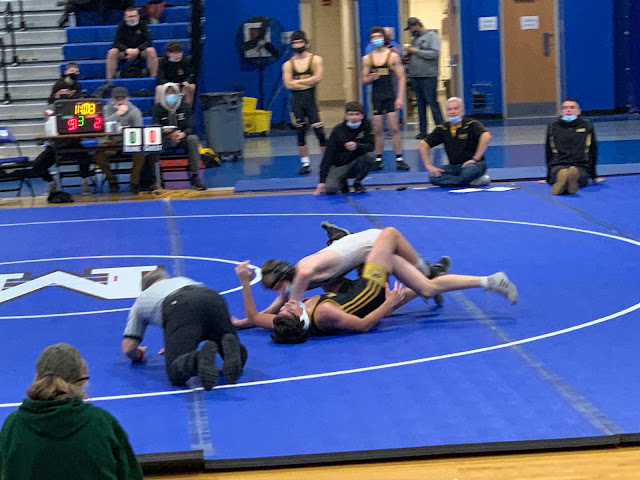 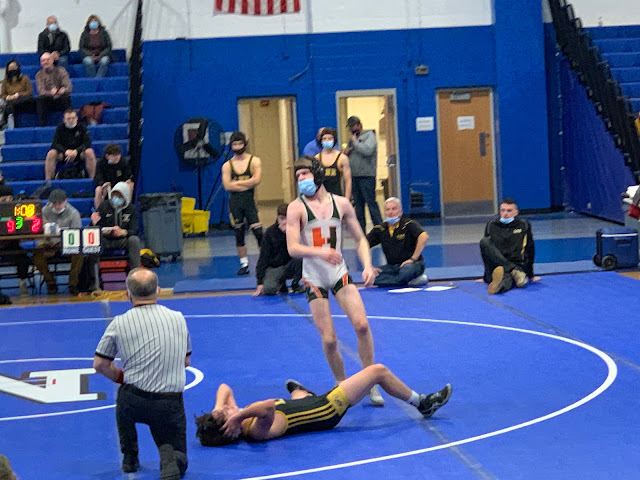 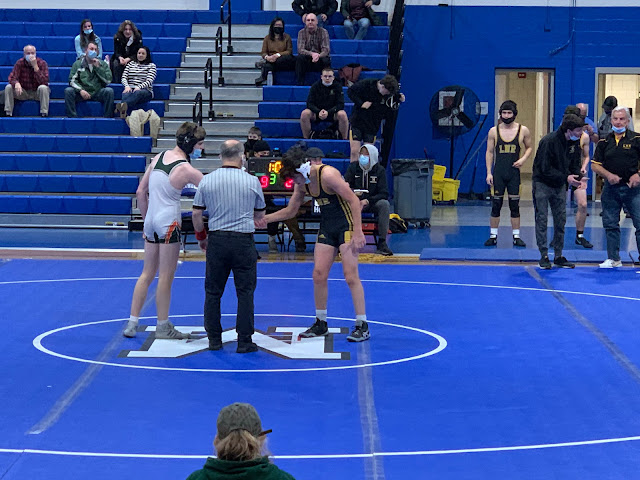 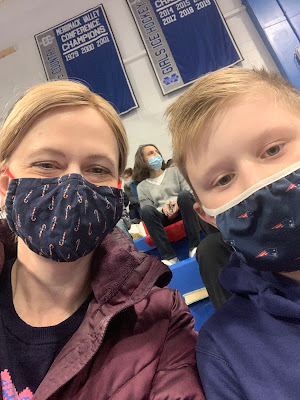 This next group of pictures is from a tournament with several other schools. John ended up coming in second place for his weight class at this tournament. He had a good day (even though he lost to a girl who he had beaten in May. She came in first!).
With his coach before a match. This was the first meet that Coach Nelson was at that season. Sadly, his father had passed away a few weeks before. He and John get along really well. 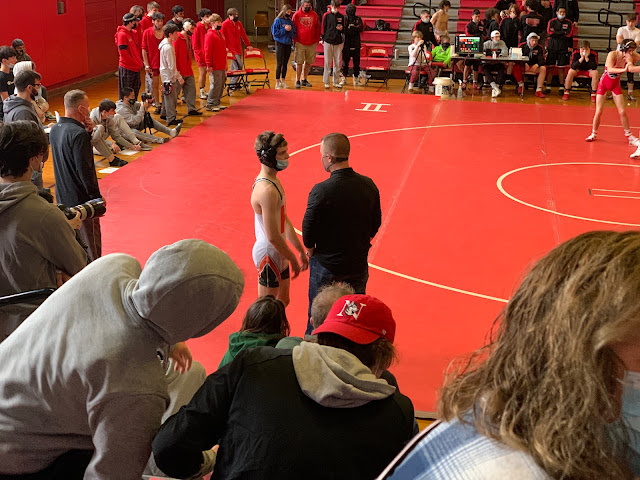 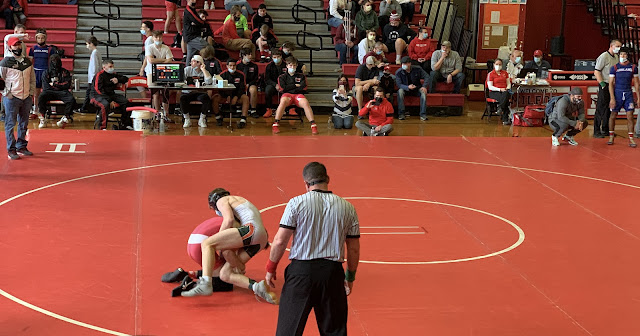 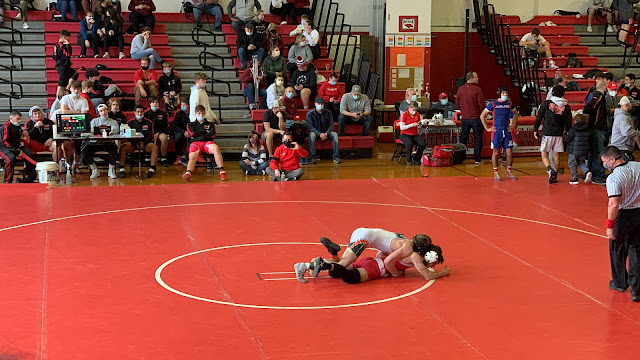 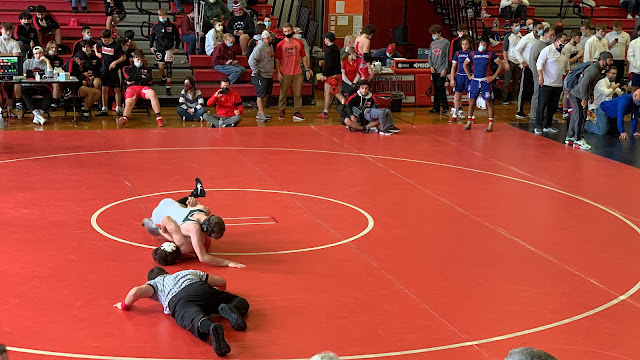 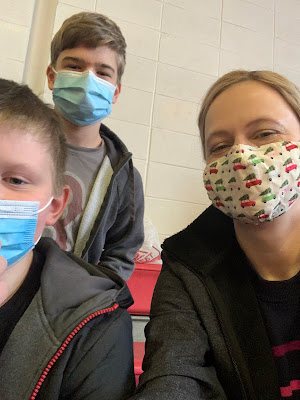 It was funny how Sam pulled his mask up over his eyes. 😂 Silly masks! 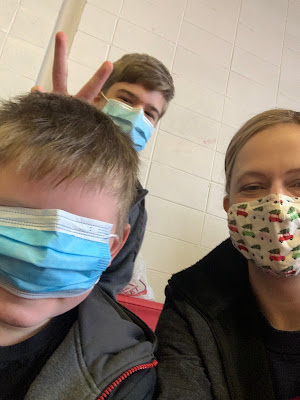 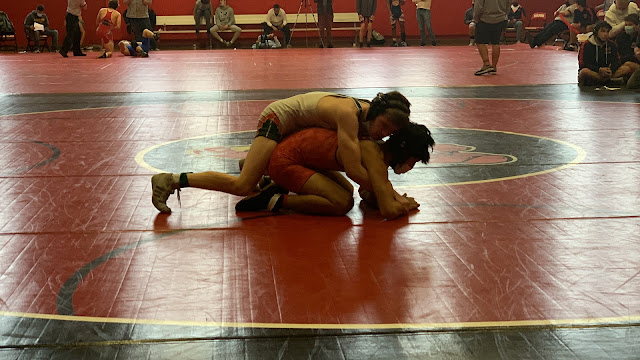 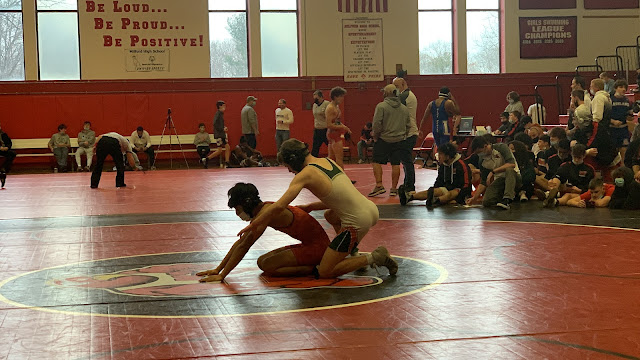 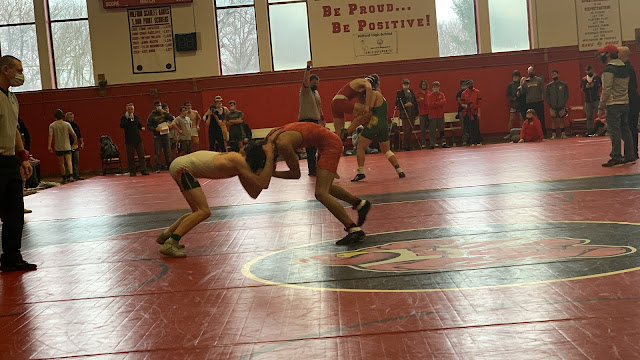 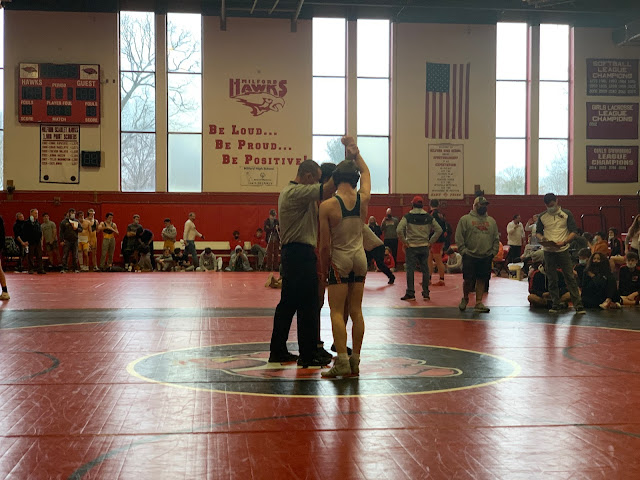 Coach Corey talking to the team. John is on the left at the top. 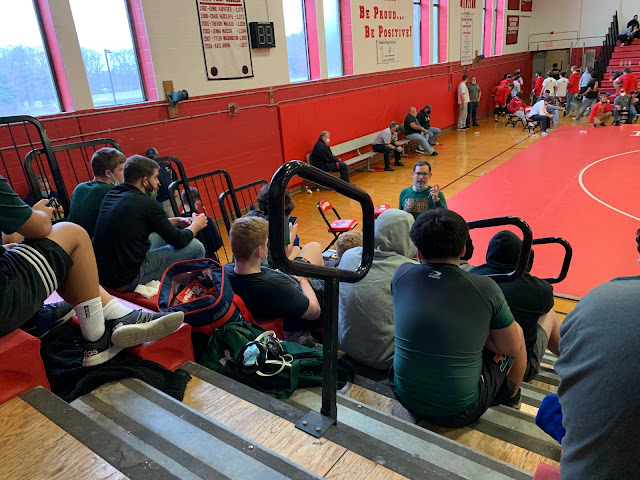 John practicing solo before the final round of the tournament. 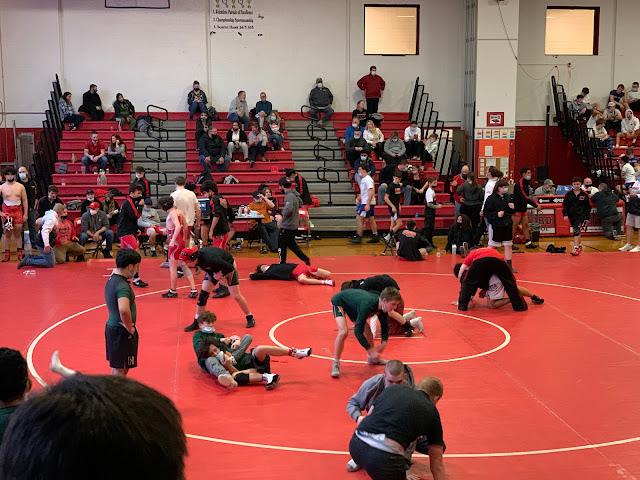 This was the final match for first place that John lost (though not by a lot). He put up a good fight, but Nora was dominant that day over every guy she faced. I wanted John to win, but I was proud of her too. John had beaten her in May and it was her turn to reciprocate. Girls who wrestle (and win!) are tough and amazing. 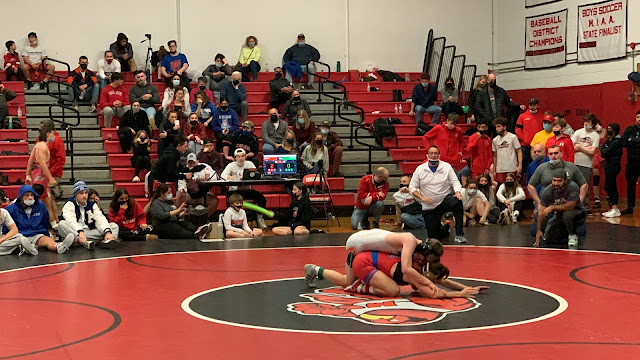 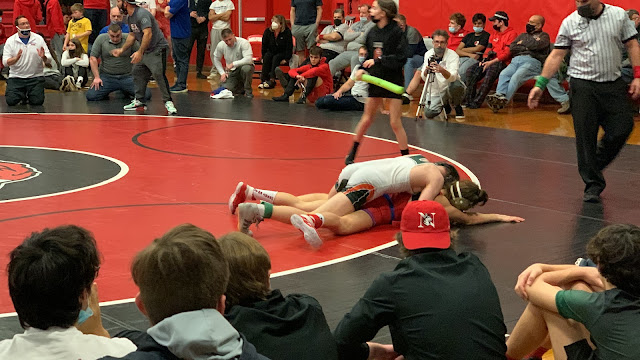 Unfortunately because of the high spread of Omicron, including to people on the team, the tournament that was scheduled for the week after Christmas was cancelled, which was disappointing. Actually, it wasn't cancelled, but our team didn't participate because the high school decided to take a two-week break from sports over the holidays because of the spread of the virus. John avoided getting it, at least as far as we know. He had a cold in mid-December, but he tested negative. My sister who lives with us had a cold at the same time and she tested positive a couple of weeks later when she did a mandatory test for work. We didn't think she had it since she and John had a cold at the same time and he tested negative. The rest of us in the family were lucky not to get it! Or maybe we did and we never knew. Who knows? 🤷 All I know is, John's wrestling season was off to an excellent and exciting start, and Covid wasn't going to shut it down. Well, not more than temporarily anyway!
Posted by Donna at 11:08 AM