I haven't done one of these posts in awhile so it's gonna be more than five things!

1. My Christmas shopping is done and so is most of the wrapping. The Christmas cards got sent out on time. I hosted a cookie swap for my book club and made festive Christmas cookies and a big crockpot of hot chocolate. I always feel like I'm behind with things at Christmastime, and this year it was even worse because I was sick, or tired from being sick, for the first couple weeks of the month, but when I see where I'm at I realize that things have gone pretty well. I still haven't reached my December ideal, which consists of lots of leisure time to read books while drinking cocoa, watching all the Christmas movies that I want to watch, and doing more meaningful things service-wise and worship-wise, but someday I'll get there. For now I try to accept and embrace the season of life that I'm in and not beat myself up for just going with the flow instead of trying to control it so much.

2. The fall trend of things breaking around the house has unfortunately continued! The oven door suddenly refused to close and I had to get the hinges replaced, a heavy curtain swag in the family room came down on one side and is now perilously safety-pinned in place, and the Christmas lights on our gigantic tree all went out and I had to figure out how to fix that, which was a pain! Not to mention little things like screws popping out of kitchen cabinet doors and minor annoyances like that. But these annoyances mean that I have a comfortable home to live in and I try not to take that for granted. I'm thankful for it even when it is a pain to maintain!

3. I worked on my friend's husband's book years ago, mostly offering some feedback and advice, and unbeknownst to me he got it published this fall and they sent me a copy with a nice little note from him. He also mentioned my name in his acknowledgments in the book. I'm so happy for him! I'm looking forward to reading it soon.

4. Speaking of books, I found a little gem at Barnes & Noble this past week. I was looking for a fun light Christmas read and found the perfect book: a murder mystery (yeah, I know that's not very Christmasy but I do love a good Christmas mystery) called Owl Be Home for Christmas (you know I love owls) and the author's name is Donna! I couldn't believe my luck! It's next up on my reading list. 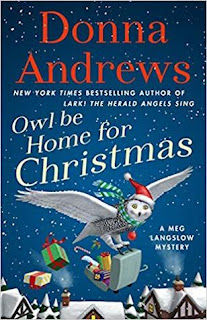 My Goodreads goal was to read 40 books this year and I'm currently on #36 so I really need to get my reading gear in game to get to 40 by the end of the year. The last few Poldark books are soooo long and they've set me back, but I really want to finish the series this year because that was another one of my reading goals, so this weekend I plan to finish the second-to-last Poldark book that I'm currently reading, then Owl Be Home For Christmas, then the last Poldark book (which is over 600 pages long--I'm going to be reading up a storm next week), and then one more book, which is going to be a classic because I also had a goal to read two classics this year and so far I've only read one. I picked the shortest classic on my bookshelves that I haven't read yet--George Orwell's Animal Farm, which seems appropriate given the current social and political climate. Which leads me to...

5. Alright, I'll go there but I'll be quick about it! I'm not happy about President Trump's impeachment. "Teflon Trump" is no longer. I think the impeachment is ridiculously partisan and that what he did was not impeachable, I think it's terrible for our already divided country, and I think it's going to galvanize his base like little else and will make him more likely than ever to win re-election next year. And I hope he does because even though he's far from perfect and I don't like everything about him, he does what he says he's going to do, and I happen to agree with a lot of what he's doing for the country.

6. Another topic from the news that's been on my mind is the controversy with Hallmark Channel's airing of an ad with a gay couple getting married. I love the Hallmark Channel in part due to how wholesome and clean it is, which is so refreshing because of all the filth that is out there for entertainment now.

I'm so tired of the LGBTQ lobby trying to force everyone to be exposed to their agenda and beliefs. People rip on my church for how we share our beliefs through missionary work and other less direct ways, but that is worlds apart from the confrontational, bullying, in-your-face way the LGBTQ lobby shares their beliefs with the world. The contrast in approaches is telling as to their ultimate source and their overall goals and motives. There are a lot of people across the country who acknowledge LGBTQ rights but don't want to see the gay lifestyle in their entertainment. It's as simple as that. I'm one of those people. I love and accept my gay cousins but I don't want to see gay relationships in the things that I watch or read because it makes me uncomfortable. It goes against some of my most important and fundamental beliefs and it doesn't feel right to me to see it for entertainment. Hallmark Channel was one of the only places where you didn't have to be exposed to that, because it's almost everywhere else now.

Granted, it was just a part of a commercial and because I DVR everything I don't watch commercials anyway, but that's beside the point. It's a slippery slope. The head of Hallmark Channel said in an interview recently that they'd be open to gay couples being in future movies and shows. If they do that, then I'm not sure what I'll do--either not watch the movies or shows that have that in them, or stop watching the channel completely. I'd be sad to give up Hallmark Channel, but it's important to take a stand. I hope they come to their senses and don't further alienate their faithful (pun intended) fan base.

7. This is one of the cutest ugly Christmas sweaters I've ever seen! 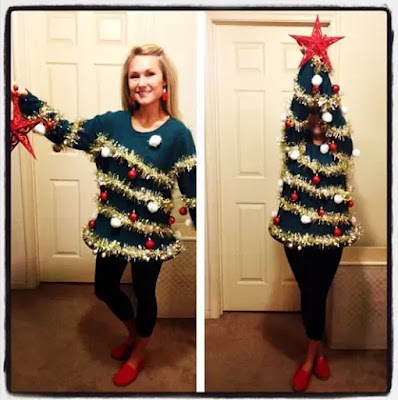 8. And this is a pretty sleigh ride Christmas sweater that I bought for half off from Talbot's this week. It's navy blue with tiny white dots, one of my favorite styles! 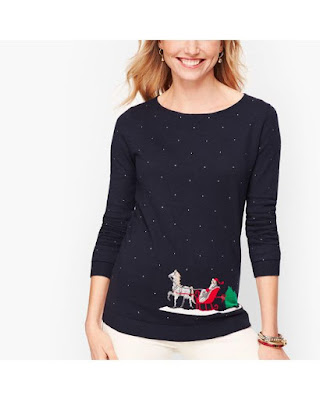 9. I'm so glad that 2019 will be over soon. This was a hard year with lots of challenging things in it. Because of that I've grown in a lot of positive ways that have made me stronger, smarter, and wiser. But man, sometimes I'd rather have an easier life without the growth! Ha ha. But I know that's what life is about, and I truly do have so much to be thankful for, and there were a lot of good things that happened this year. But I'm still glad it's almost over. I'm looking forward to not only a new year, but also a new decade. I think we're in for a real rollercoaster ride for 2020 and beyond!

10. My new year's resolution for this blog is to get all caught up by June, and from then on, I'll blog a lot more in real-time, or only a couple of months past real-time since I only upload my pictures every few months. Once I'm caught up I'm going to get blog books printed from the last several years so that I'm all up to date on those (for the possible day when the internet goes dark and everything on it is lost...at least I'll have my books! Until they get destroyed by the fire that's going to burn the earth...okay I'll stop now!).

I'm sorry this wasn't the most festive of posts! I tried but I know it falls way short! I wish you a very merry Christmas, a peaceful holiday season, and a happy new year! 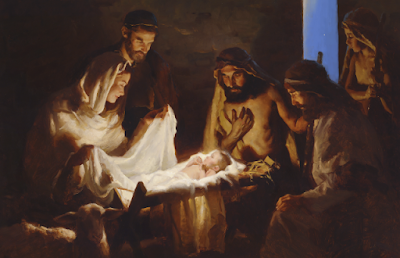 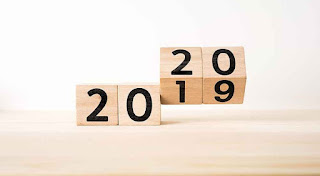