1. Public service announcement that I mentioned a couple of days ago: if you get my blog posts by e-mail, I highly recommend that you click on the link in the e-mail and read the post on the blog itself rather than right in your e-mail, because I often go back and change things after I publish a post and sometimes I add more things in. So go ahead and do that now. Click that link! I'll be here on the blog waiting for you, I promise. Of course I understand if you can't tear your eyes away from a post when it's really interesting, so just do your best. 😅

I also think blog posts are more fun and interesting to read on an actual blog itself. I don't know, I guess it's all about the surroundings or something. Which brings me to my present surroundings and the environment in my house...

2. The house has been getting increasingly de-personalized and empty over the last few weeks as we get ready to put it on the market. All my worst fears of making the house generic and stripped of personality are coming to fruition. The empty spaces on the walls and surfaces are depressing. I'm very influenced by my surroundings, and I don't like to be surrounded by emptiness; I like to be surrounded by objects and pictures and things that bring me joy. I definitely have an abundance mindset over a simplicity mindset. The difference between the two was made clear to me in my page-a-day calendar a couple of months ago: 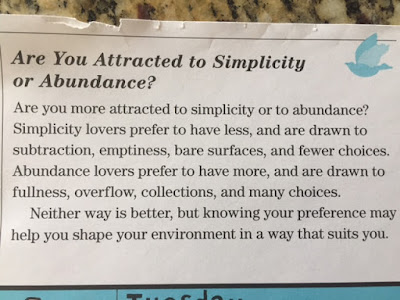 While I can definitely see the benefits of simplicity in a house, overall I find it to be boring, bland, and bleak. I wrote about this a few years ago in an amusing post about bare kitchen countertops. Well, now my countertops are pretty bare, and I can truly say from firsthand experience that I really don't like it. I know this is how many people choose to live because it's their style and I respect that, but I'll never be one of them. I'm going along with this only for as long as the house is for sale. Once we move (and even before that!), our things will be out again, not in a cluttered way, but in a beautiful way that makes our home truly ours. #bringbackthephotos #bringbackthebooks #bringbacktheowls #bringbacktheknickknacks #bringbacktheabundance!

3. I'm finally reading Little Women! I probably shouldn't be too proud of that since most people who like reading the classics have probably read it well before they get to their 30s. Ha ha! I tried reading it a few times when I was in elementary school and it didn't hold my interest and I never made it very far into the story, so I didn't try again for over 25 years. I wish I'd read it in high-school because that would have been a great time to read it and I would have liked it better then, especially since I lived in Massachusetts not too far from Concord. I'm looking forward to reading the whole book (it's surprisingly long and the print is small!) and then watching the new PBS adaptation in a few weeks. Also, the local theater company is putting on the musical in a few weeks and I'm excited to go to that. I went to it when it opened on Broadway in the early 2000s when Sutton Foster played Jo March and I really enjoyed it. There's a pretty song about Massachusetts that I'm hoping this musical will have.

4. I've been reading the Isaiah chapters in 2 Nephi of the Book of Mormon this week. I'm not a big fan of these chapters. I find them archaic and boring. O me of little faith. But I really do love The Book of Mormon. (See my post from earlier this week if you don't believe me!)

5. John's first track meet was yesterday. It was almost FOUR HOURS LONG. 😖
Other than that, it was fun to watch so many 7th and 8th graders from three different schools run their hearts out in a lot of different races. It brought me back to my own glory days on the high-school track team. John did well and he was happy and excited. He loves this kind of thing.

I had the opportunity to watch him interact with his teammates and friends (you know, since I was there for so long), and it made me feel so sad that he's going to be leaving them behind when we move this summer. I'd been getting more and more okay with moving, even kind of excited about it, but watching him with his peers yesterday brought back some of my biggest fears and anxieties about moving.

John's on a good path here in Iowa. I'm confident about his future here. He has friends, he's well-liked by lots of different kids of various races and backgrounds, including the popular ones, and the school system is perfect for him. He's grown up since the age of five with the same kids, and I love that. I really wanted to see them graduate together in five more years. I'm so worried that when we move to Massachusetts he'll lose all of that, that he won't have a good group of friends, that he won't be liked and accepted the way he is now, that he'll get left behind in the super-competitive school environment of Massachusetts, that he'll lose the happy, easygoing, funny aspects of his personality and become a sullen teenager who lacks confidence and motivation. I know that's totally worst-casing it and that the chances of all that happening are low, but still, I worry.

I moved to Massachusetts at the same age and grade as John--the summer before 8th grade. And just like him, I moved to a place where I had cousins, aunts, uncles, and my grandma. And I did fine. I made friends. I did well in school. I was happy, even happier than I'd been before we moved (of course, I moved to MA from Utah, a state I don't ever want to live in again and which in my opinion and experience isn't anywhere close to as good as Iowa is, but that's a subject for another blog post in which I do some good old-fashioned therapeutic hand-wringing).

ANYWAY, I'm getting off topic here, and this is supposed to be a short blog post and I have a lot of things to do today. My point is, John's track meet was long but fun, he did well at it, it made all my sadness and anxiety about moving come back because it's John I worry about the most for our move, but I think he'll be okay, but I'm still worried. There, I'm done!

This weekend's plans include birthday parties, housework, rain and snow (even though it was over 70 degrees out yesterday!!), and a nice date night with Peter to go to an Emanuel Ax concert, which I'm pretty excited about.
Happy Friday the 13th!