1. I had tickets to go see President Trump last night at a rally in Cedar Rapids, but it got postponed due to changes in his schedule (Paris Treaty, perhaps?). I was disappointed because I was looking forward to it. Like him or not, I think it's neat to be able to see the president in person and make your own impressions of him, as well as of the other people who go to these things. I'm hoping that the rally will happen before I leave for MA in a month so that I can go.

I've actually seen Trump in person once before. It was in 2000 at Penn when I was a sophomore. He came to do a taping of the MSNBC show Hardball with Chris Matthews because he was thinking of running for President back then. I'm pretty sure nobody there had any idea that he'd actually become the president 16 years later. Melania was in the audience and they weren't married yet. She stood up at one point during the taping when they announced her and the guys around me were all like, "She's so hot!" I thought it was kind of funny that Donald Jr., who was also there and was a senior at Wharton, had a potential stepmom who his peers were lusting after. Weird!

2. The last day of school was on Wednesday. I'm trying to adjust to being home with kids all day every day. It definitely throws a wrench into my usual routines, but...summer day camps to the rescue! Ha ha, just kidding (kind of). John graduated from 6th grade and it was such a fun little ceremony. Pictures coming at some point...knowing me, probably in September or October. 😆

3. Speaking of which, I'm determined to get all of the blog posts for last summer done this month before I leave. I don't think I really did any for the summer of 2015 and I want to have a few on the blog, so I'd like to fit those in too, and then be all caught up with our summers. That's my goal!

4. In addition to getting caught up on the blog, another project I've been working on is cleaning out and organizing about eight years worth of magazine articles and newspaper clippings that I've been meaning to organize into reference binders for years. It's crazy how much got piled up over the years! I really do like having this information and once it's cleaned out and organized and put into binders (how I love 3-ring binders) I'm pretty sure I'll use them. After the time it's taking me to do this project, I better!

Here are my piles of articles so far by category. Am I crazy? 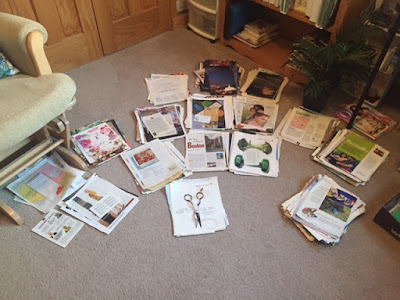 5. I'm so happy to report that my beloved kitty Brody, who seemed to be at death's door a month ago, is doing really well! (Knock on wood.) I think that being out in fresh air every day on our screened-in porch, drinking purified water, and not taking any medications at all is doing him a lot of good, as well as tons of TLC and kisses and cuddles from me (when he doesn't reject them) and prayers on his behalf. His diabetes seemed to go away after his surgery so no more insulin shots, and I decided to discontinue the chemo drug he was on because it was making him sick and it hasn't even been proven to work in cats. I'd rather he be happy and comfortable than live a longer life in which he's sick and miserable. His energy and playfulness are back, and his fur and whiskers are growing back, and he has an excellent appetite. I'm so thankful! I know that there are one or two tumors still inside of him and one of them is dangerously close to his heart, so I'm not taking anything for granted. Every day with my Brode is a blessing!

Laying in the sunshine does a body good! As long as you have fur or SPF to protect yourself. Ha ha. 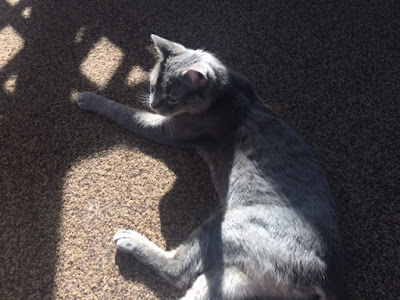 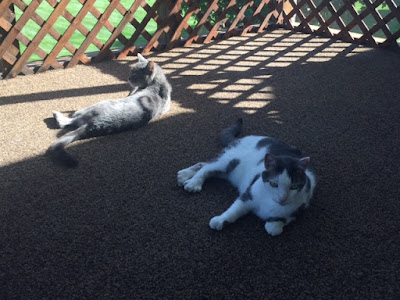 6. We spent Memorial Day weekend in Omaha, Nebraska, where we'd never been before. What a nice city! We went to an amazing zoo (another zoo!) and to the downtown Old Market area and to some really cool church history sites and the Winter Quarters Temple. Expect a blog post or two about it in the fall, when what we did for Memorial Day weekend will feel a little irrelevant. 😄

Here are Peter and John at The Cheesecake Factory, where we stopped for lunch in Des Moines on our drive home. John looks like he's really enjoying that embrace doesn't he? 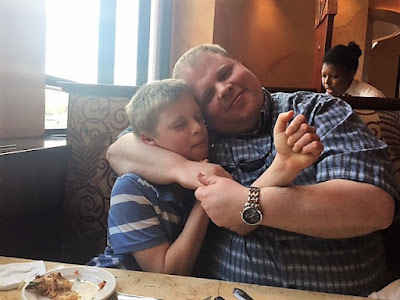 7. Speaking of cities, Peter is in New York City right now. I'm once again envious of his travel schedule this spring. New York is one of my favorite cities. I can't wait to go back at some point. 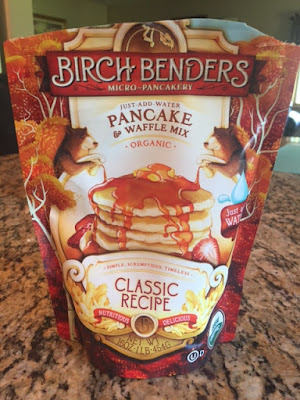 I've been using Birch Benders for a couple of years and it is seriously so good. You can get it at Target. All you have to add is water. It makes fluffy, golden, delicious pancakes. And it's organic!

9.  After our pancake dinner yesterday evening, I took the boys to their favorite playground. They had a great time; meanwhile, I spent an hour swatting away gnats and wishing I'd remembered to bring the bug spray. 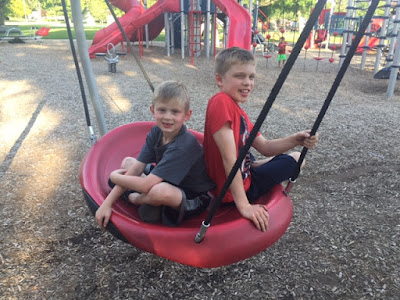 10. I'm so glad that it's June! June is my second-favorite month, right after July and before December. I love that it's at the beginning of summer (my favorite season) when the whole summer is still stretched out before you, and I like the warmer temperatures and how it stays light for so long in the evenings and how the fireflies appear when it does get dark. I think June is magical!

Here's to a magical weekend!