1. Last week Sam's car won his Cub Scout pack's Pinewood Derby against ~15 other cars. He was so excited! That means he's eligible to race it at the regional Pinewood Derby race in April. Good job Peter Sam!
They worked on it together, but let's face it, Sam is 7 and can't use power tools to cut wood yet. Peter did the designing and wood-cutting and he was the mastermind of the strategic use of weights on the car and graphite on the wheels. Luckily for our sons, Peter is somewhat of a Pinewood Derby car-designing master! 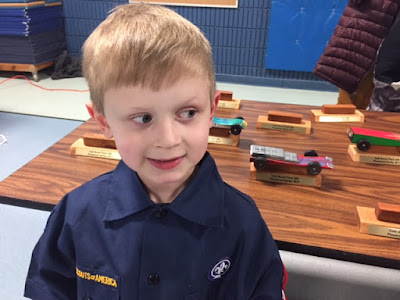 I didn't take many good pictures that night, as you can see.

2. I saw this amazing backpack on amazon this week. It's the design from the stained glass in the Beast's castle in Beauty and the Beast. 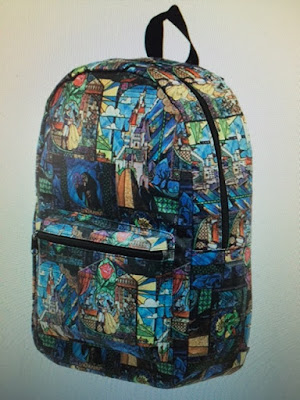 I really, really like it. This has been my thought process about getting it or not over the last few days:

It's cute, but I don't need a backpack. I already have lots of bags. And I rarely use backpacks.

But it's so unique, and it's one of my favorite movies. I could get it for my collection of things devoted to my favorite things.

I really don't need it.

But I want it.

Is it more for kids? Would I look like a dork using it?

Probably and maybe, depending on where and how I use it.

To just hang in a closet or be displayed somehow in your hobby room?

Where would I realistically use it?

This would be the perfect bag for schlepping around DisneyWorld with, and one totally appropriate for the experience. It would also be a fun bag to use for port excursions on our next Disney cruise, which happens to be in March when the movie comes out, which I'm planning on seeing in the movie theater on the ship.

3. We've had a snow drought in our corner of Iowa this month. It's been very disappointing for several reasons, one of them being this: last month the boys discovered a great sledding hill that's been hiding in the field behind our house and they haven't been able to use it since before Christmas because all of the snow from our snowy December melted away soon after Christmas.

This is what it's looked like almost all month: 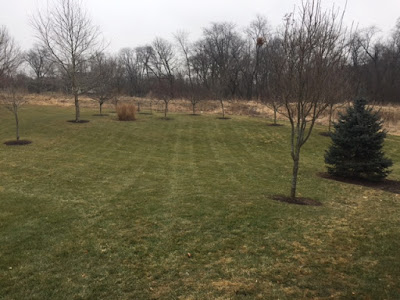 And there have been some days that felt like early spring! I'm fine with that at the end of February and in March, but not really in January. I like when the four seasons behave properly. And I love snowstorms!

We finally, finally got some snow on Wednesday, so now it looks like this: 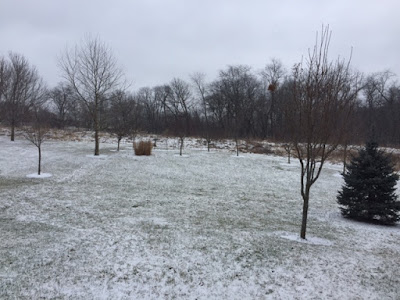 We got a dusting. It's better than nothing!

Here's confirmation from the local news the other night that I'm not exaggerating about our snow drought: 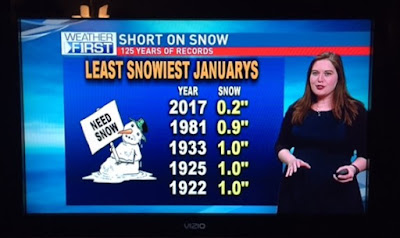 This is one of the least snowiest Januarys (Januaries?) in the past 125 years. It will be the least snowiest in recorded history if we don't get much more snow in the remaining days of the month, and guess what? There's not much, if any, in the forecast.
😞😞😞
(That's my first time using emojis on the blog! It's so great that Blogger is using emojis now!)

4. Below is a quote from Margaret Nadauld, who was the general Young Women president of the church when I was a teenager. I've always liked it. 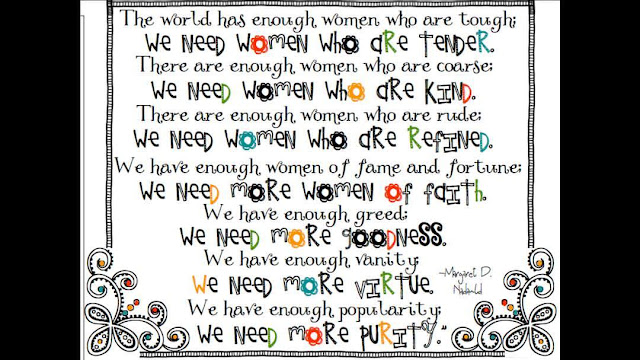 This week I saw this quote posted on Facebook a few times, I think in response to the Women's Marches that took place on Saturday. I didn't really mind the Women's Marches and I respect their right to speak up for what they believe in, but some of the speakers (like Madonna) and some of the signs and other things I saw on the news and from people I know who were there were vulgar and over-the-top. It's my aim to be more like the refined woman described above, especially when I'm unhappy about things happening in the world or in my life. Behaving that way and effecting positive change don't have to be mutually exclusive.

5. I went to a junior high meeting the other night for parents of incoming 7th graders in the fall. I can't believe John is going to be done with elementary school and moving on to junior high in a few short months. I'm sad, a little worried, and a little excited, all at the same time. It's crazy how fast time passes! It will be weird to be the parent of a junior high-schooler. Then I'll get used to it, and two years later I'll be freaking out about being the parent of a high-schooler!