I meant to write this post in April when I started blogging again, but I didn't, so I'm doing it now. This is a list of some of the random things that happened in our lives from December/January to March, some big (nothing really that big), and some small (and kind of silly).

I was disappointed by the lack of snowstorms we got. It was overall an uneventful, cold winter when it came to the weather. I miss New England winters and nor'easters.

The series finale of Downton Abbey was practically perfect in every way. They did such a good job with it. I was impressed and so touched by it. It even made me cry. I love that show!

We canceled a cruise, scheduled another one, canceled that one, and scheduled a different one. Then for good measure we scheduled one more. If we hadn't canceled that first cruise, we would at this very moment be cruising around the Mediterranean for the next two weeks while exploring some of the great countries of Europe. Sigh.
It's a pleasure deferred.

Peter and I came up with what we think is a really good business idea that we want to do together. I'm not going to say what it is yet because I don't anyone to steal it! The problem is, we need the capital to start it up and make it happen, and it's quite a lot of capital that we'd need. We'd have to save a lot of money to do that and sacrifice things like our vacations, which would be no fun. And there'd still be no guarantee that it would be profitable, at least not for awhile.
This is one of the reasons rich kids are lucky--they can dip into their trust funds when they want to start a new business or venture or get a loan/gift from their parents to help keep it going until it can fly on its own. And I don't think there's anything necessarily wrong with that. I wish Peter or I were trust fund kids when it comes to this. We were surrounded by them at Penn (one of whom was Donald Trump Jr., by the way).
So I'm not sure yet where we're going to go with our idea. It's kind of on the back-burner right now, but it's percolating.

Speaking of employment, we had the potential opportunity to move to Portland, Oregon. A company out there really wanted Peter to come and interview with them, and chances are good that he would have gotten the job. But I'm fiercely opposed to moving, especially to anywhere further west than we've already moved. Plus I think Portland is a super-liberal hippie place where I'd never fit in (stereotypes, I know. I had 'em about Iowa too.) The Pacific Northwest is beautiful and I know there are a lot of things that I'd love about living there, but it's too far from my family and my real home. Besides, I believe that it's going to get hit hard by a huge earthquake and tsunami and I don't want to be anywhere near there when that happens.
So, we're not moving to Portland, Oregon.

I bought my first-ever bikini. This will never be worn in public. It's strictly for my jacuzzi bubble baths, which I take one or two of every month. I like being a little more covered up as I read and soak, and a bikini was the perfect solution. Otherwise, I am not a fan of the bikini swimsuit, on me or on anyone else!

This winter I made more time in my life for reading, Pinterest, afternoon power naps, piano-playing, and unscheduled "white space" in my daily life. It was such a nice way to live. I want to get back to that again in the fall.

I went on a social media fast in which I deleted Facebook from my phone and iPad and stayed mostly off of it for over a month. It was so nice and I barely missed it. Our trip to DisneyWorld was much more pleasant without me feeling like I should post pictures and updates on Facebook or Instagram. I was on my phone a lot less, which is the way I want to live my life.

I came very close at one point to deleting my Facebook account, which I didn't do, but I did make some modifications to make my newsfeed a happier place for me personally. Sometimes I get so fed up with Facebook and all of social media. I'm in a place in my life right now where I grow wary of the endless pregnancy/baby announcements, the events that leave people out, the dumb things people post about, me being judgmental about the things people post about, the worry about getting enough likes or comments on the dumb stuff I post, etc. And this doesn't even get into matters like politics and social issues.

But it would be disingenuous to say that I'm really totally done because there are things I do like and appreciate about Facebook, so I still use it. Just not as much. And I stay very aware of how it makes me feel when I use it. If I start veering off into dark paths, I take a break for awhile, or modify my newsfeed, or both.
(Facebook, I can't quit you! Instagram, I can and I did quit you. Twitter and the rest of them, you have no chance.)

We paid off the last of our school loans, so we finally fully own our fine Ivy League educations (since we're not trust fund kids and all). Our cars are also paid off, and we never carry any credit card debt, so our only debts left are our two mortgages. Sweet!

Speaking of school, a good friend of ours from college became the CEO of a big company in New York.

I don't think my dental hygienist likes me very much. Not because I don't take care of my teeth, which I do. I think she thinks I'm a spoiled or lazy housewife, or both. I feel like she resents that I go away for the summers to a second home near the beach and that we go on nice vacations (which almost always happen to coincide with my six-month check-ups), and I don't have to work to provide any of that. I've told her about some of my challenges in life and that I do freelance copyediting work, but I don't think it's helped change her perception of me that much. She's friendly, but I'm pretty sure there's an undercurrent of hostility there that I'm picking up on (I've always been pretty good at picking up on the vibes that people give out). Oddly, I'm not offended by this. I even find it mildly amusing (which would probably make her dislike me even more).

I quit the gym. I tried it for a few months with a friend, but then she quit, and I didn't go again without her. I've never been a gym person. I did like the classes, and if it were closer to my house I think I would have kept going for those. But it's too far away, so it's back to the treadmill and walking for me. That's good enough for me. I don't need to be a female version of Adonis, I just want to be healthy and fit and maintain my weight.

I found a great facialist and started getting a facial each month. I love it and so does my skin!

There was a rabid raccoon in our neighborhood. It was creepy. Boo Boo almost got into a fight with it one day. Fearless, crazy dog!

Goodreads informed me that I'm in the top 1% of reviewers on their site. That's what happens when you're a creature of habit! 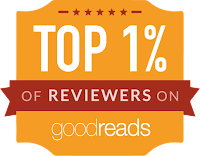 And that's some of what happened during the cold and boring months of winter!