Sam turned four last month, and he was excited about it since this was the first year that he actually understood what a birthday really means (Presents! And cake!). Here's the photographic documentation of his special day. Peter, John, and I love him so very much and we're all so thankful that he's a part of our family!

I made Thomas the Tank Engine cupcakes for him to bring into his preschool class.
Sam approved. 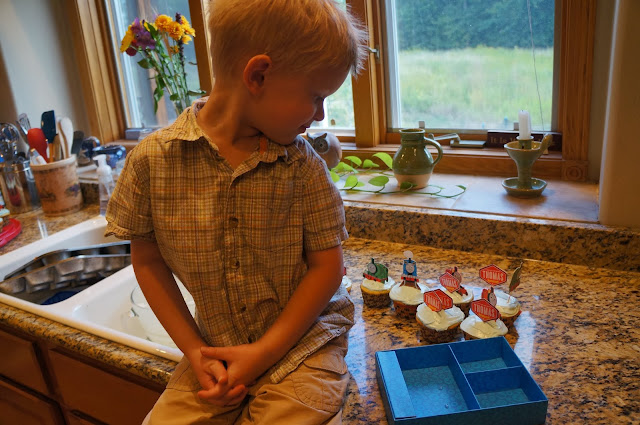 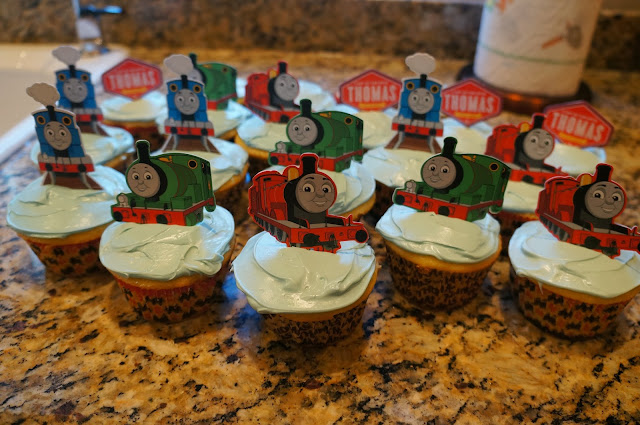 I wrapped his presents and set them out on the table after he went to bed the night before his birthday so that they'd be waiting for him when he got up in the morning. 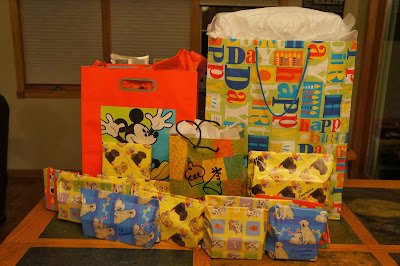 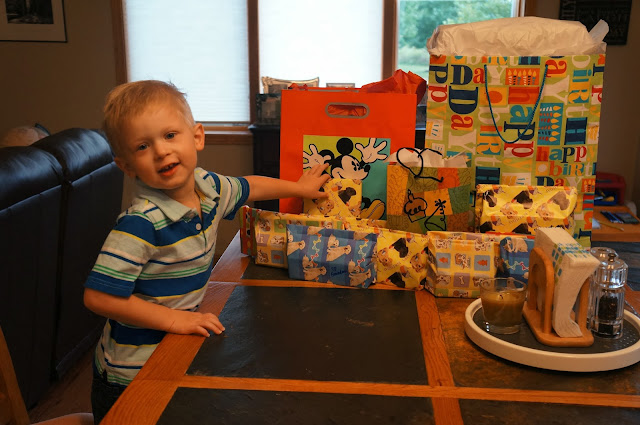 Every single present we got him was something train-related. Most of them were Thomas trains or tracks. If it's trains he wants, then it's trains that he gets. I let him open two presents in the morning (one from us and one from my mother), and two or three more throughout the afternoon. That way he had things to play with throughout the day and wasn't totally overloaded in the evening. I call it the fine art of present balance. 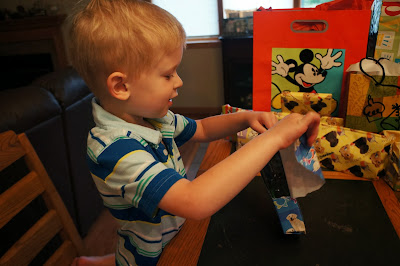 Opening Present #2. It was nice that he let John help him open it. The picture on the left where Sam's hand is on John's arm is so sweet! 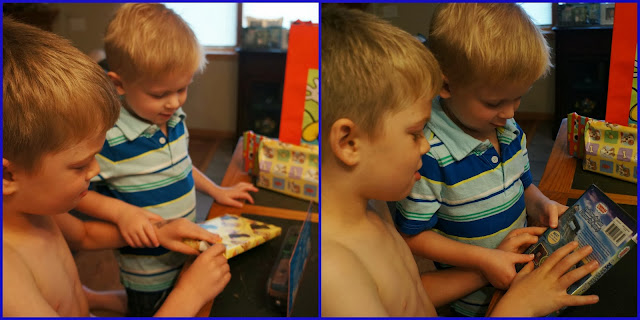 (That gift is a Thomas movie, Blue Mountain Mystery. Sam watched it like twenty times in the first two weeks after he got it. I have to say that it was pretty good for an animated train movie!)

He wanted to take pictures of his presents with my phone. 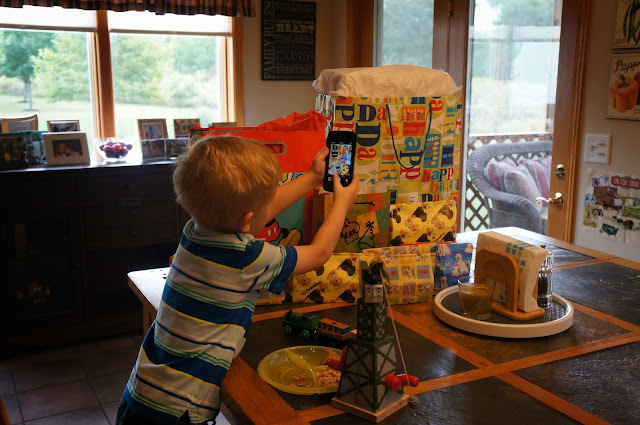 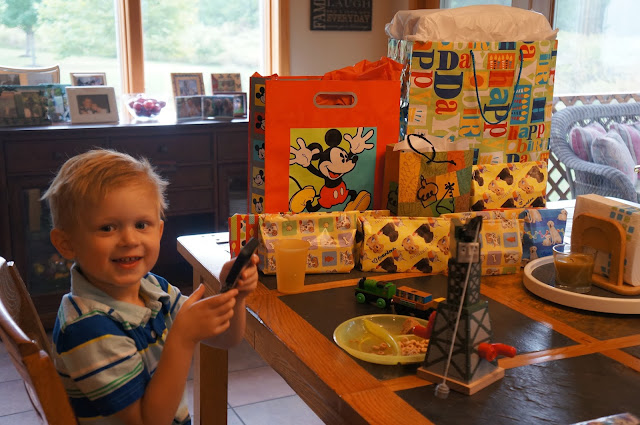 He came home from preschool with this cute birthday crown.
Here he is with another train that he'd just opened for his lunchtime gift. 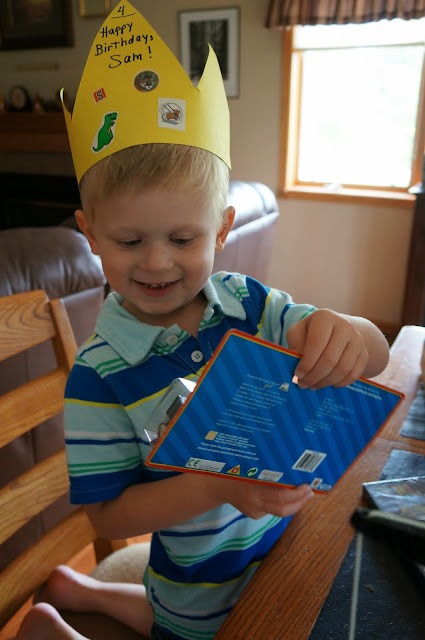 We went to HuHot for dinner because Sam loves to eat the rice there, and then we went home for
birthday cake.

Hmmm, this cake is missing something... 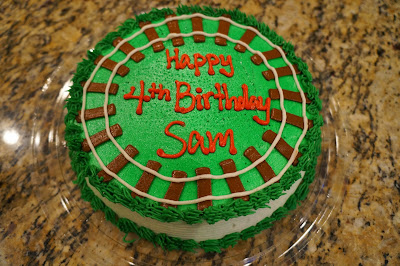 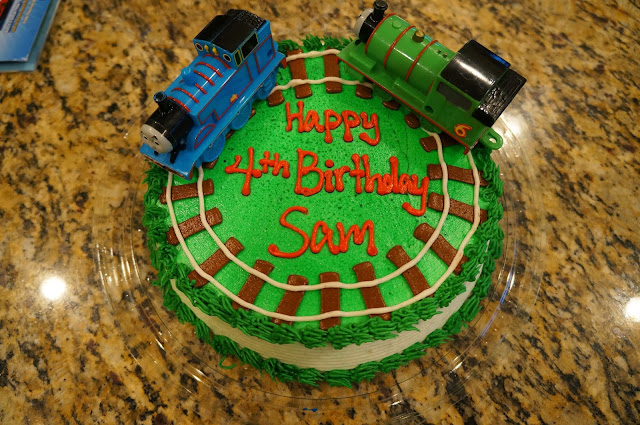 This is when we were singing to him... 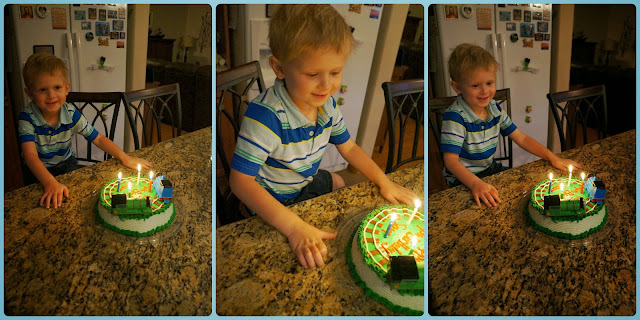 He needed a little help blowing out the candles. John was happy to oblige. 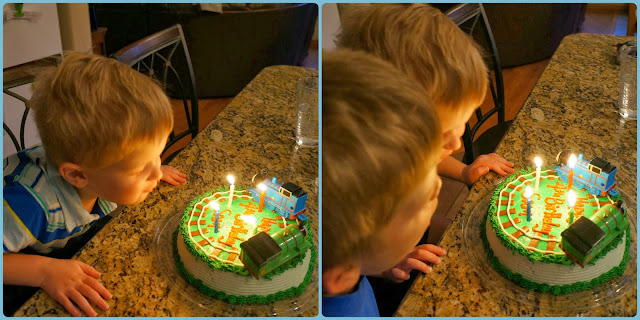 And then Sam proceeded to eat only one bite of his cake. That kid! After the singing and candles he was eager to open the rest of his presents, especially the biggest one that was in the gift bag. (It was Knapford Station, an addition to his train tracks. Just in case you were wondering. You know you were!) 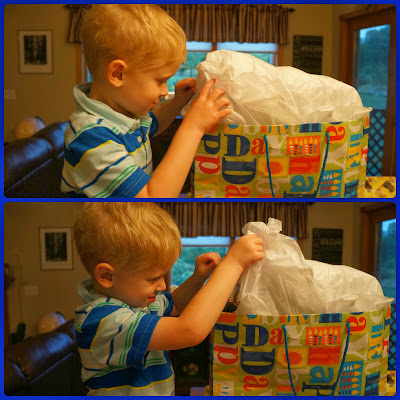 And lastly, here he is playing with some of his new trains and tracks before bedtime. 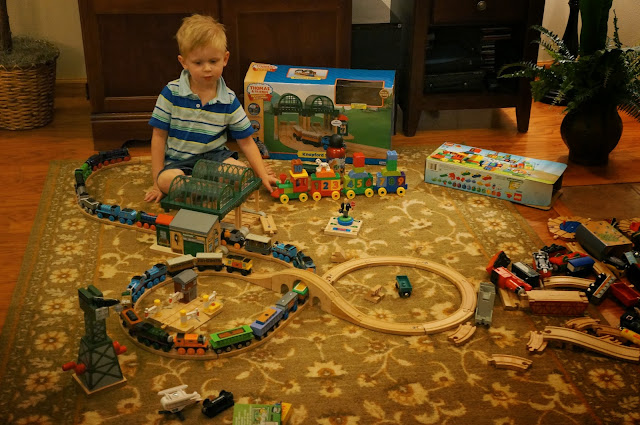 It was a fun day!
Happy Birthday Sam, you train-loving little cutie!