1. I bought a bar of lavender goat milk soap last week when I was in New England, and I like this little saying that was on the back of the wrapper:

God and germs are everywhere,
So say your prayers and wash your hands.

Cute! Incidentally, the soap is hand-made on a farm in Peter's hometown in Rhode Island by two sisters, 11 and 21 years old. I like supporting businesses like that where they keep it in the family and do the work themselves, as well as keep the ingredients natural. Their website is rachylsgoatmilksoap.com.

2. I'm currently reading a really good book, Insurgent by Veronica Roth. It's the second book in a popular young adult dystopian trilogy. I read the first book, Divergent, right before this one. The third book, Allegiant, comes out next week. I like waiting to read a popular series all at once like this because then I don't have to wait a year (or however long it takes) for the next book to come out. It's my way of outsmarting the system. I know, I'm a genius. 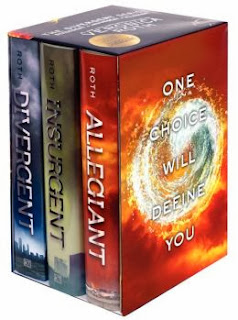 An added bonus is that Divergent is being made into a movie co-starring Kate Winslet that's scheduled to come out at the end of March next year. I love reading a book and then seeing its movie. I don't think this series is as good as The Hunger Games, but so far, it's really good. 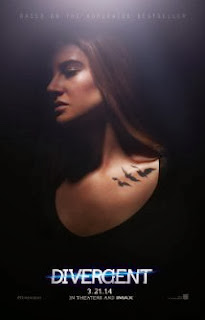 3. The series finale of TLC's What Not to Wear is tonight. I'm sad that this show is ending! I've been watching it ever since it first started airing back when I was a newlywed in 2003. I remember reading a newspaper article about the show before it started, how it's modeled after a British show, and I thought it sounded fun. I was hooked after the first show and never really stopped watching! I think Stacy and Clinton are funny in their humor (it's so New York, and I love it) and they give great timeless fashion advice. Some of the people they help are so funny, others are annoying, and some of them have been really inspiring.
Several years ago, I was seriously considering nominating a co-worker friend of mine in New Jersey for the show, and I regret not doing it, because I think she would've had a good chance of making it. She was so good-natured (and badly dressed...sorry, but it's true!) and she would have loved it. I wish I'd done it! 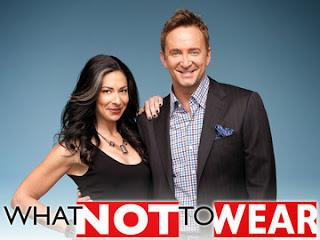 4. Here's something you probably didn't want to know. I've had a few plantar warts on the balls of my feet ever since I was in college. I've done things over the years to try to get rid of them, like Dr. Scholl's medicated pads and good old duct tape, but nothing has worked. So I'm finally having them removed with cryotherapy. It's cool! Literally--my doctor uses a device that looks like a little blowtorch that blows out really cold air and chemicals onto the warts to kill them and freeze them off. It's not nearly as painful as I'd heard it was, and it's working! I've gone in for two treatments and she said that my next one will probably be the last. I'm going to treat myself to a pedicure once they're gone as a reward for finally getting this taken care of. I should've done it a long time ago!

(As a courtesy to you I will NOT include a picture!)

5. They say not to dwell in the past or worry about the future, but I do it all the time. Here's a past, present, future comparison that I'm thinking about today.

Past: Last Friday was a very good day. I was in Massachusetts, and my mom and I visited my sister and my two adorable nephews and and then we went to the new house on Cape Cod, which I got to sleep in for the first time and do some fun shopping for. I really love this house and am so happy with it.
Present: Today I'm home all day and don't need to go anywhere and I have nothing difficult or stressful on my To-Do List. I love these homebody Fridays! They help keep me sane.
Future: Next Friday morning I'm getting a little dental surgical procedure done. I shouldn't be that nervous about it because I've had so much dental work done over the last 20 years, including some major oral surgery which I was awake for because I was pregnant at the time so I couldn't be put under (that was a really fun experience). So I'm not sure why I'm dreading this as much as I am. It will take less than an hour and I can drive myself home afterwards. I hope it will be as easy as the cryotherapy has been.

So based on those three days, I rate the past Friday in first place, the present Friday (today) second, and next week's Friday dead last. Oh, I shouldn't say dead, I could jinx things for my procedure! Ha ha, just kidding, I'm not really that paranoid. Well maybe I am a little.

I hope you have a fun weekend! My plans include a family trip to Bloomsbury Farm tomorrow and a baby shower. It should be a good weekend!