One of the things we did on our Disney cruise was to meet and take pictures with many of the characters on the ship. It was fun to interact with them, and it's much easier to do than at the parks. There are still lines, but they're not as long, and there aren't nearly as many people on a cruise ship as there are at Disneyworld! The ship's photographers take good pictures, and they'll also use your camera to take them if you want. I was impressed with the level of interaction that the characters were able to have with us since they can't say anything or change their facial expression or anything like that. I kept wondering about the person under the mask: What did they look like? How were they feeling? It must get tiresome having that big head on!


We met Minnie Mouse before we boarded the ship. This was Sam's first close-up character encounter and he got upset, as you can see in the picture below! There are no pictures of just Sam with any of the characters or of just the boys with any of them because Sam refused to be photographed with them without me, so I'm (unfortunately!) in many of these pictures. He quickly got over his "character anxiety" and enjoyed meeting them during the week, but I still had to hold him every time! 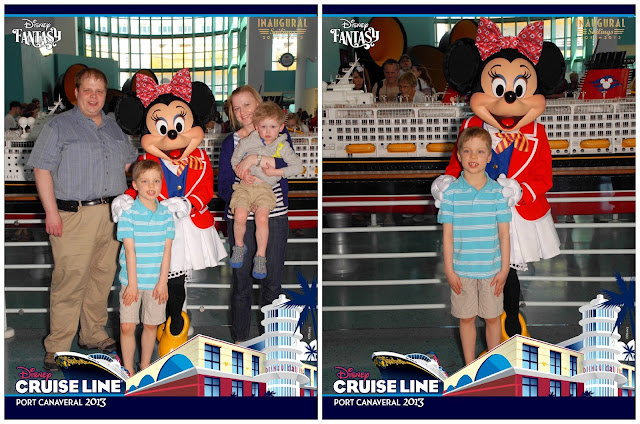 Here's John and I with Minnie on Formal Night. I liked how her peacock headband matched the grand lobby's peacock-themed decor. That mouse knows how to dress! 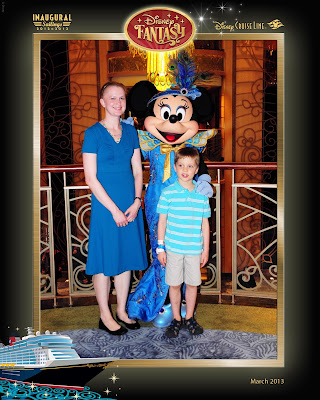 With Mickey Mouse on Pirate Night. I wish I'd been wearing my cool pirate bandanna in these pictures! 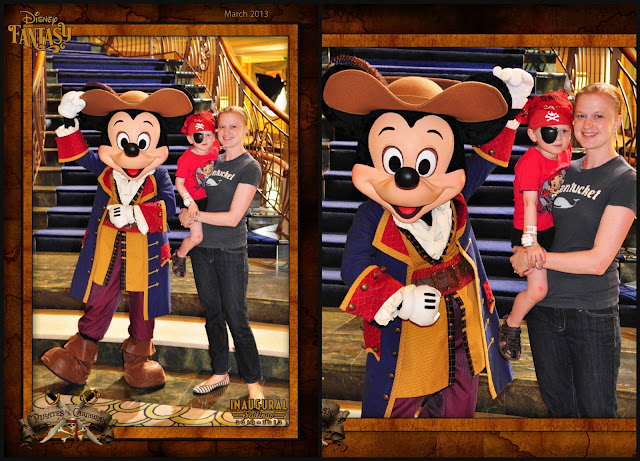 With Captain Mickey on Formal Night. 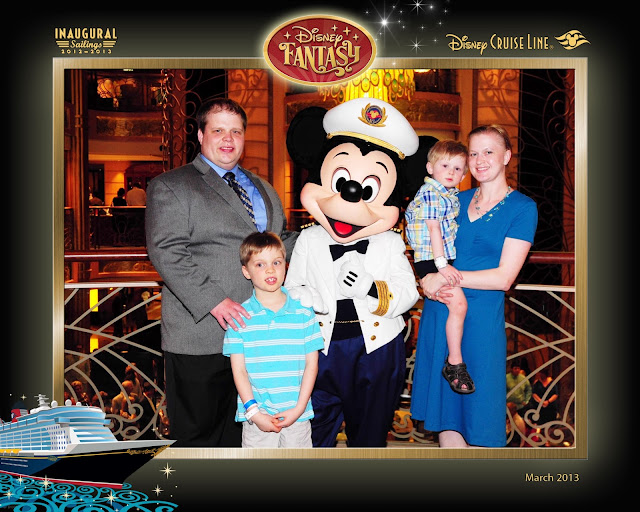 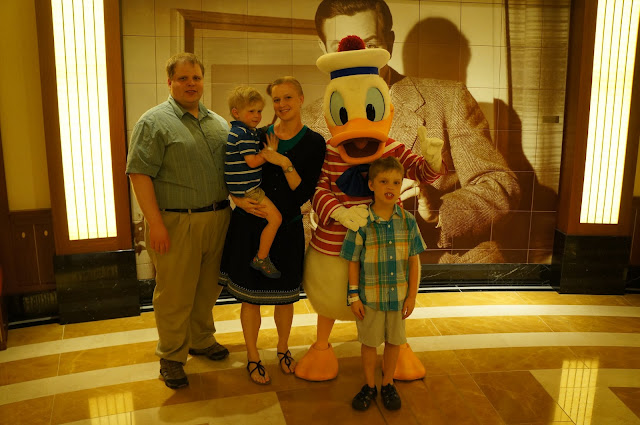 Daisy Duck was really cute. I liked her dress, gloves, and bracelet (this was on Formal Night) and she played the role of fashionista duck perfectly, pointing out my jewelry that she liked and managing to be exuberant and fun without a voice and without being able to change her facial expression. There was a good actress in there! 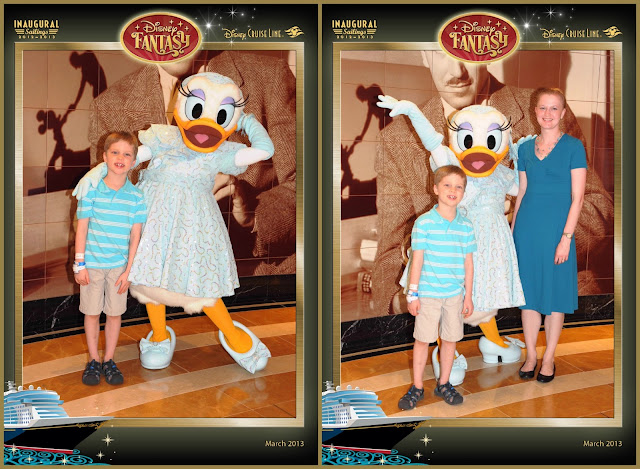 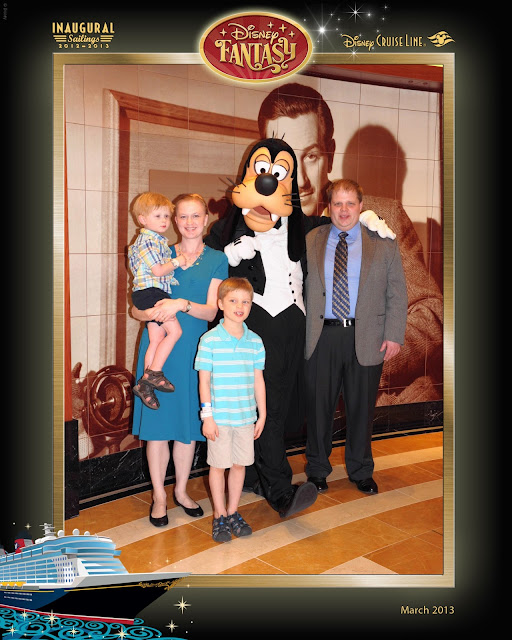 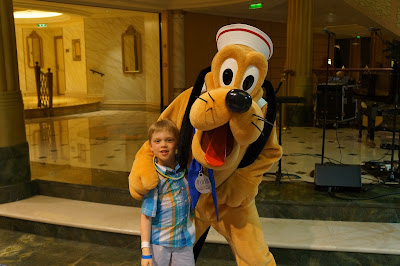 Chip and Dale. They're too cute! 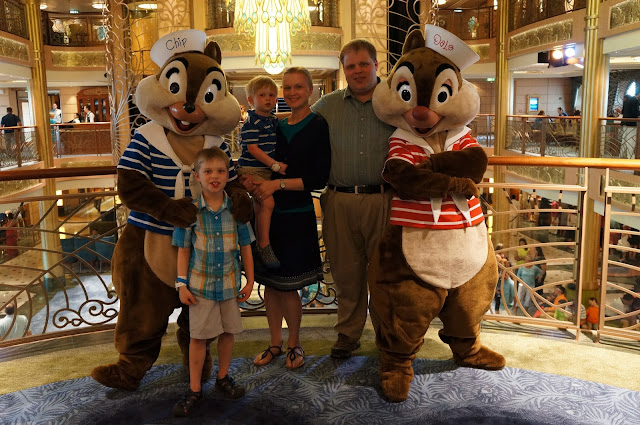 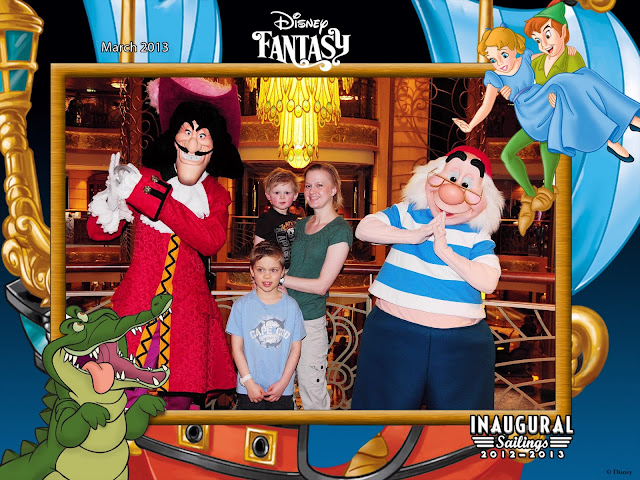 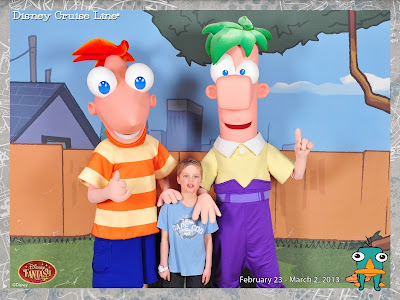 In the picture above, Lilo is signing John's autograph book. He collected many autographs that week.
What a great souvenir!

John and his book had a comfortable, scenic place to rest while we waited in line for Phineas and Ferb. Lucky kid. Meanwhile I held Sam for 20 minutes! 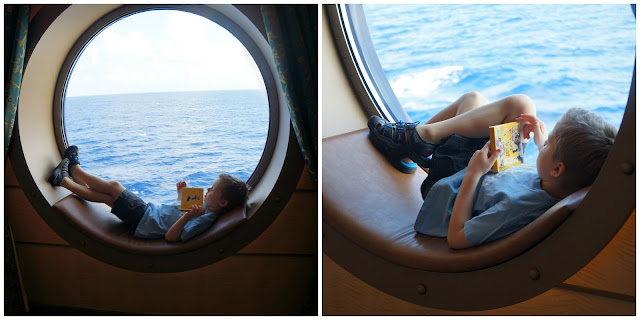 The characters were very kind and attentive to each and every child or person they met.
It was all part of the Disney magic and famous Disney hospitality! 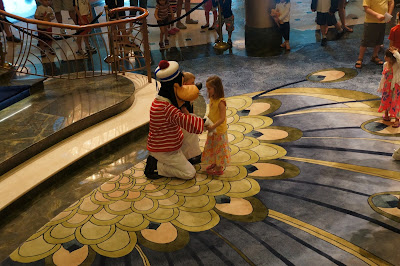 There were a lot of other characters that made appearances during the week, but we just chose our favorites to meet at times that were convenient for us. Next time we'll meet some new ones!


P.S. In case you're disappointed that there are no princesses here, don't worry. I will be indulging my inner little girl by paying tribute to the Disney princesses who were on board in my next post!