1. Last week I wrote about Hurricane Sandy and I mentioned how it affected me directly because I ordered costumes for a party and they didn't arrive in time because they were shipping out of New Jersey and then the storm hit. The company sent an e-mail a few days ago and I found out that they're located in Edison, New Jersey, which is where Peter and I lived for four years right after we got married. That made it hit home even more than before. They included these pictures of the damage their offices and warehouse sustained: 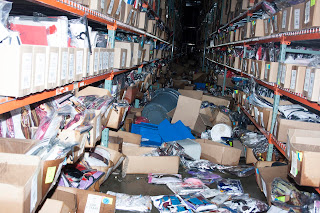 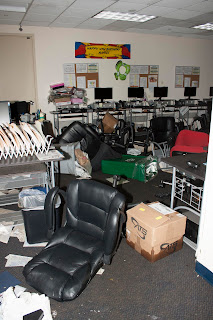 Isn't that awful? This is why I'm not complaining about what happened with the costumes. It's trivial compared with what so many people in New Jersey and New York are going through right now. I spent all of last Friday morning driving to different stores and searching for costumes but I did it without (too much) grumbling, which is an accomplishment for me because I tend to be a little obsessed with time management. I think one of the positive effects of natural disasters is that they really help put things in proper perspective.

2. They would have been great costumes for Peter and I to wear to the Murder Mystery dinner party though. The dress I ordered looked like this: (Sorry for the small images; the website will only let me copy the thumbnails.) 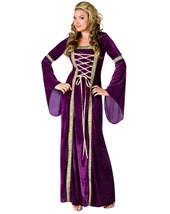 I even ordered a wig! Finally, the long blond locks that genetics didn't give me! Maybe I'll wear it on my bad hair days. You think? 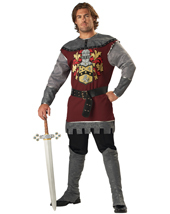 The costumes arrived this past Monday, three days too late, but I'm not going to return them because they'll be good couples costumes to have for the future. And I'm happy to report that I was very fortunate to find a medieval-type dress to rent that fit me almost perfectly and was a pretty shade of royal blue. I found a royal(ish)-looking tunic for Peter (he and I were a lord and lady and the dinner was our marriage feast), but unfortunately it didn't fit him very well. When John saw him wearing it he said "Dad, you're too fat for that dress!" which I'm still laughing about. 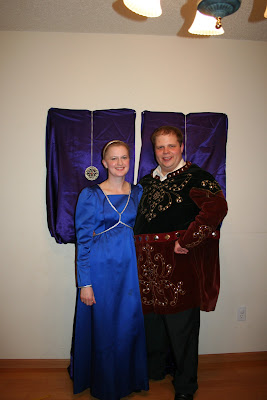 And guess what? I turned out to be the murderer! Ha ha ha! (That's my evil laugh.) I wasn't the most exciting murderer because I wasn't very dramatic (I hate being the center of attention in large groups! Plus I can't act that well because I'm way too self-conscious!), so I was a quiet murderess--all the better to get away with it, right? But they had the clues they needed to figure out that it was me, and two of them guessed correctly. It was a really fun night! 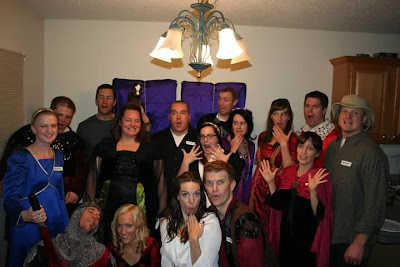 3. This is my last hurricane-related thing. I feel truly sympathetic about people's power being out for over a week now, and it makes me think of a new show I've been watching this fall called Revolution, in which all of the power goes out in the whole world and stays out, and it totally changes the world and society and pretty much brings them back to the 1800s. I really enjoy this show and it makes me think about life without electricity and what I'd do if that really happened. As much as I like old-fashioned things and times, I'd have a hard time without electricity and hot water (hence my unfortunate aversion to camping), so I'd probably have a mental breakdown, and then hopefully adapt and get used to it. Needless to say, I'm VERY thankful for electricity! 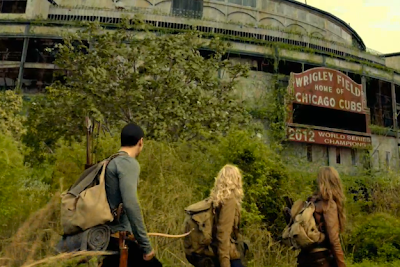 4. Pinterest now has "secret boards"! I've been wanting them to do this for awhile! Sometimes there are things that I pin, or want to pin, that I want to keep private for whatever reason. I hope these secret boards will be permanent. As of now they're for the holidays and you can only have three of them.


5. I thought I was getting a good head-start on Christmas by trying to get the shopping and cards done this month, but some of the people in my neighborhood are really getting a head-start and already have their trees up and some holiday decorations out! As long as it doesn't happen before Halloween, I don't mind this because it helps make the Christmas season last longer by starting it earlier. I love Christmas and the holiday season, and December always seems to pass by so quickly. I don't plan on decorating until the week after Thanksgiving, however. But when I do, my front porch is going to look like THIS: 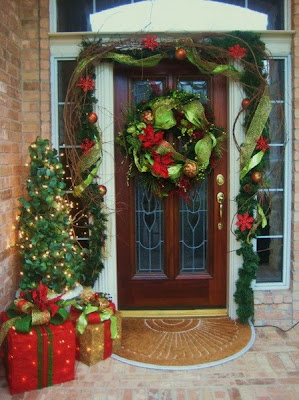 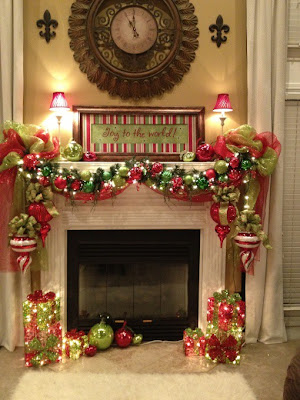 One can dream and fantasize, anyway. Thanks to Pinterest (what else?) for the pictures and the inspiration!