They're back! I haven't done these in awhile. Have you missed my fragments as much as I have? (You don't have to answer that.)

*The Northeast is getting pummeled with snow after having a few mild winters in a row. Why did this happen AFTER we moved away from there? I love snowstorms! I've been a little disappointed with our first Midwestern winter. Apparently it's been a mild one. You would think that would be a good thing, but no, I miss snowstorms. While it snows frequently here, there haven't been any big storms. The good thing is that it hasn't been as cold as it usually gets, although there have been a few days where it's been bone-chillingly cold--well below zero, which is just miserable. Anyway, I'm hoping for at least one big storm before the winter is over.

*Speaking of winter, I finally bought a pair of Uggs! For years I resisted doing so because:
1) I thought they were kind of "ugg-ly" (ha ha),
2) I thought they were overpriced, and
3) I don't usually like to get things that are really trendy (it took a few years before I'd read the Twilight books, for example).
Instead of Uggs I've worn an imitation pair from Target and a pair of black Bearpaws which are nice and about half the price of Uggs. I decided recently to get the new "Bailey" Uggs on a whim. I like that they're shorter and have a button on the side; I think these "moonboots" (as I've always called them) are actually cute (well, unless you fold them all the way over like the black boot in the picture below. That looks weird!). Most importantly, they're very warm and cozy. Real sheepskin feels awesome on the feet when it's cold outside! 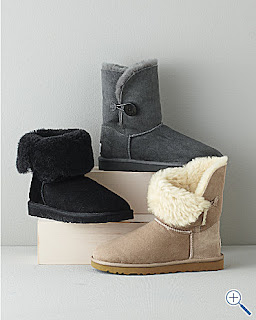 *I went to college at the University of Pennsylvania, which was just ranked fifth in the nation by U.S. News & World Report, tying with Stanford, and coming in behind Harvard, Princeton, Yale, and Columbia (when did Columbia get so good? I don't remember it beating Penn when I was in school. They're moving up!). In any case, it's not shabby company! I loved Penn and Philadelphia. Coincidentally, I read a recent issue of the alumni magazine this week, and it made me feel terribly nostalgic for my college days. They were so much fun and it was one of the best times of my life.

*Also in the rankings, Brigham Young University (BYU) in Provo, Utah was ranked the most popular university in the nation. That's where I always wanted to go and I was accepted there, but I decided to go to the secular Ivy League rather than "the Lord's Ivy League," as I like to call it. Either way, I couldn't lose!

*Well, from the best schools in the country to this: our dishwasher broke on Sunday night. It needs a new motor, which won't be replaced until next Wednesday when the part comes in and the technician can come and do it. In the meantime, I'm having loads of fun hand-washing all of the dishes every day.

*I like the new season of American Idol more than I thought I would. It's not the same without Simon Cowell, but Steven Tyler and Jennifer Lopez are surprisingly good replacements. I like the star power and singing experience they bring to the judging table. And Steven Tyler can be really funny.

*January was a productive month for me. I was able to get a lot of things done that have needed to get done for awhile. As a reward for myself I'm going to buy some cute pajamas that I've been wanting for awhile. Let's hope I can maintain the momentum and make February a good month too instead of getting stuck in the doldrums like I did last February!

*This is my 300th blog post in four years of blogging!

I guess I've rambled on long enough for now. Thanks to Mrs. 4444 at Half Past Kissin Time for the Friday Fragments idea. Have a good weekend!
Posted by Donna at 8:17 AM

Update On My Quest to Get Oprah Tickets...

Back in September in this blog post I vowed to go to a taping of the Oprah show this year. Like I said there, I'm not some weird overexcited fan (really, I'm not!), I've just liked many of her shows over the last decade and I like her. So, I received this e-mail last week:

Thank you for your interest in attending a taping of The Oprah Show.

Unfortunately, we were unable to accommodate your reservation request.

Continue to visit the Oprah Show Reservations area on Oprah.com to see when we'll be offering reservations for upcoming shows.

You can also click here to check for last-minute reservation opportunities, as additional seats often become available at short notice.

Well, this won't deter me; like the e-mail encouraged me to do, I'm going to keep on trying, especially for one of those last-minute seats! There are about four more months until the end of the show. I am determined to be in the audience for a taping of one of those final shows. I didn't move all the way out to the Midwest to not be successful in this (the show is taped in Chicago, which we now live less than four hours away from!). Wish me luck!

Can you believe it's been one month since Christmas? It seems like it was a long time ago. It feels that way every year. There's all the warmth and brightness and good feelings of the holidays and then--BAM!--it's over and done with. Cold, dark January arrives, bereft of the lights, decorations, songs, and gifts of December, and it makes it seem like Christmas was months ago rather than weeks. Anyway, onto the merrier things of the now-past season... 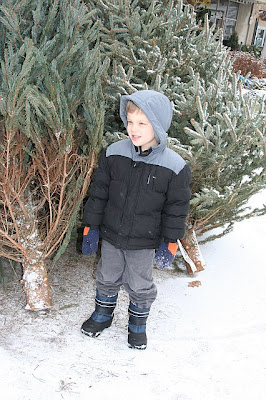 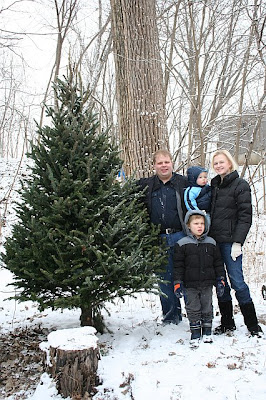 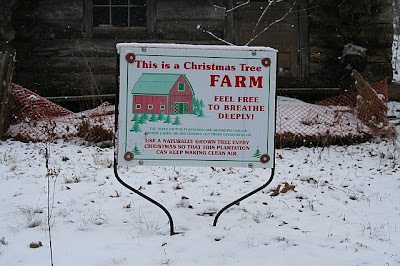 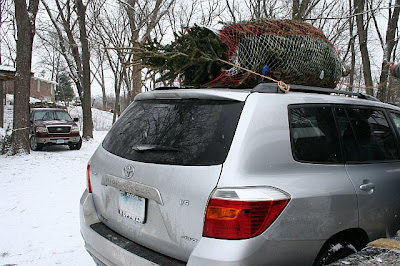 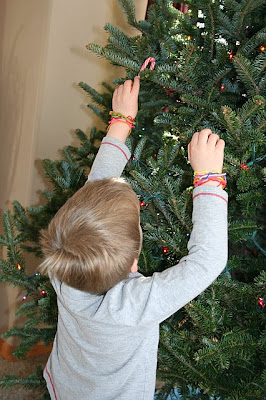 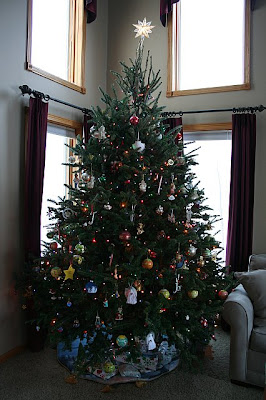 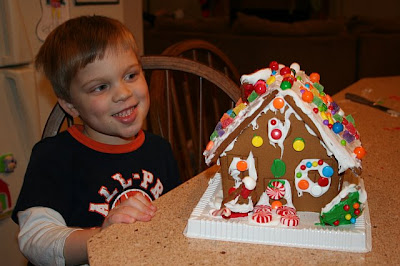 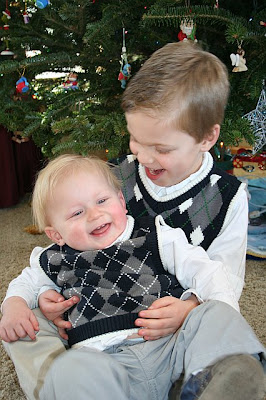 The nicest gift basket we've ever been given (It was from our real estate agent; Peter's given her a number of referrals since we moved here.)... 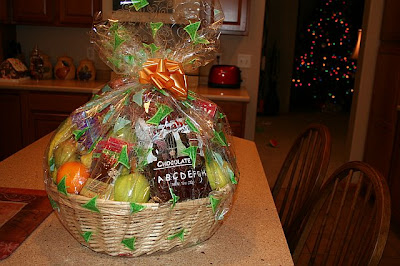 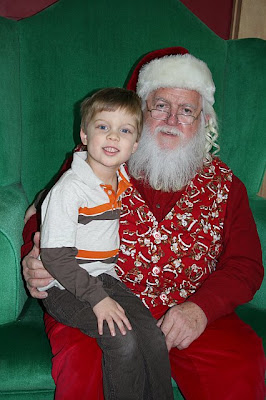 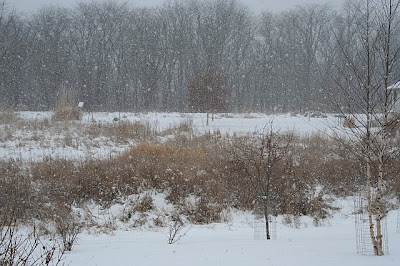 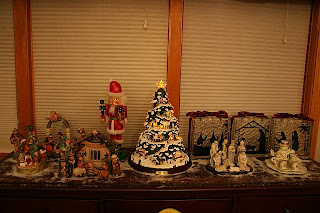 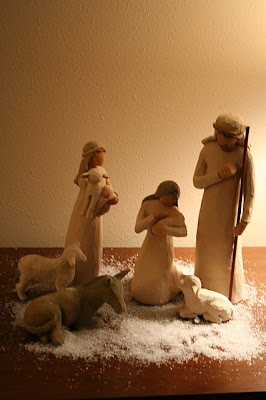 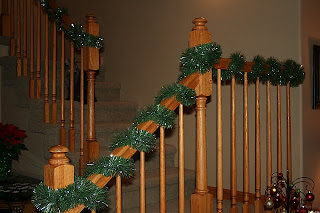 Christmas morning, before and after... 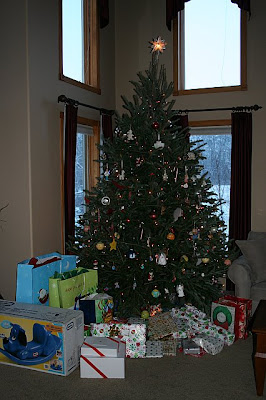 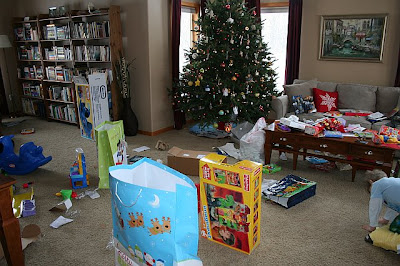 Ten Things I Learned From Our Trip Back East

The week after Christmas we went home to New England for the first time since moving to Iowa. I learned a few things from the experience:

1. Don't fly United. (We had to spend the night and then thirteen hours of the next day at O'Hare because we missed our connecting flight to Boston. Speaking of which....)

2. Don't fly through O'Hare Airport in Chicago. (It's too big. Too much can go wrong. Not even the fun children's play area (which was a sanity-saver for us and the kids) would make me want to go through O'Hare again!)

3. Don't fly in the winter, unless it's to a warm and sunny destination. Maybe not even then.

4. Don't check your bags; try instead to cram everything into carry-ons. We spent three days in the same clothes without most of our things. Our luggage made it to Boston way before we did. That stunk. Literally.

5. When every flight to Boston is overbooked for days and there are over 130 people on standby and you are ranked in the 50s on the list, take any flight you can that will get you to New England. We got on an 11 p.m. flight to Hartford, Connecticut (just a few miles from our old house) and my mom came and picked us up and drove us home to Massachusetts the next morning. It was a pain, but it saved us from spending more days at O'Hare.

6. Beg your mother-in-law to give less gifts next year or to have them sent directly to you. You don't want to know what we paid to ship everything back to Iowa!

7. Getting a 1-year-old baby to go to sleep and stay asleep in a hotel room is nearly impossible. I had some bad mom moments due to this.

8. Don't get your child all excited for the hotel pool and then find out when you get to the hotel that there is no pool. This happened on our last night at a hotel in Boston by the airport.

9. When you park at the airport when you're first leaving for your trip, don't leave the interior lights on. Otherwise your battery will slowly drain and you will come back a week later to a dead car.

10. Because you love your family and you had a great time once you got there, consider doing it all again next Christmas.
Posted by Donna at 2:57 PM