Close Encounters of the Merry Kind

Last year, at the age of three, John would have nothing to do with Santa. When we took him to see him, he got upset and tried to hide under a nearby row of chairs. This year, I am happy to say, was much different. I guess the age of four brings with it growing maturity and understanding about such important matters!

On Saturday we went to meet Santa at our town's annual Winter Wonderland event. John was excited about it. He finally understands that Santa brings presents, fills up stockings, eats cookies, and flies through the air in a sleigh. And that now makes Santa one very acceptable, very cool person!

Here he is waiting in line to meet Mr. and Mrs. Claus: 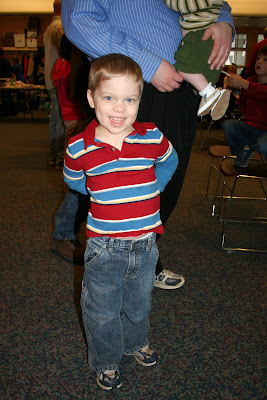 When it was John's turn to meet the man of the hour, he ran right up to him and threw his arms around his neck and gave him the biggest hug. It was very sweet! And pleasantly surprising. I wish I'd gotten a picture of it. His excitement and enthusiasm were truly genuine. 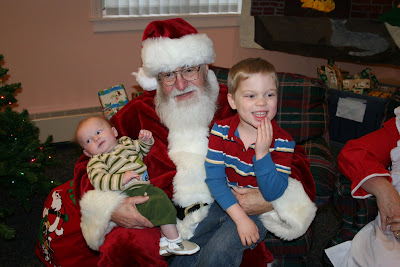 John was thrilled! Sam was happy too, even though he, of course, had no idea what was going on. At 11 weeks old, he was probably the youngest child to sit on Santa's lap that day. People in line behind us went "Awwww" when they saw him with Santa. 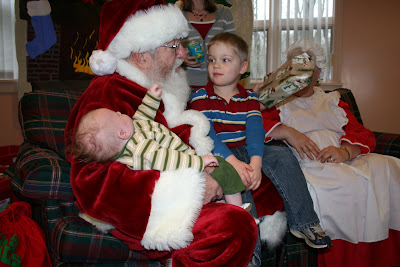 "Santa, I've been a good boy this year. (!!??) Can I please have a skateboard for Christmas?" Meanwhile, Sam was trying to give Santa's beard a tug to see if it was the real thing. Maybe babies understand more than we realize! 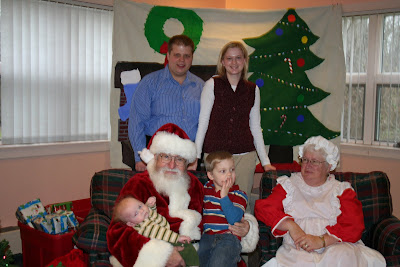 A (blurry) family photo with Santa and Mrs. Claus.

This Saturday we're going to a Christmas Breakfast on a farm where John will get to see Santa and Mrs. Claus again, along with Frosty the Snowman, some reindeer, and his personal favorite, the Grinch. (I'm not joking...his hero is the Grinch!)
Posted by Donna at 5:15 PM