My First Summer Veggie Garden: A for Effort, B- for Results 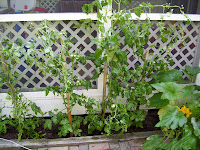 I finally accomplished a longtime goal this past summer: I planted a vegetable garden. Yeah! It was a very small garden, just a strip of soil lining one of the sides of our back patio. I figured that it was okay to start small, otherwise I was never going to do it.

I don't really have much gardening experience, so I planted what I heard were easier vegetables to grow: tomatoes and zucchini. I planted four cherry tomato plants, but two of them must have been mislabeled when I bought them because they produced bigger medium-sized tomatoes. I also planted one zucchini plant. The zucchini plant failed and yielded nothing. Two of the tomato plants did quite well, but the other two (the ones with the bigger tomatoes) didn't do as well. The tomatoes they grew had weird spots and abrasions on them and didn't look all that appetizing.

I was pretty diligent about taking care of my little garden: I mixed the soil with some good, rich Miracle-Gro before I planted, tried to space them correctly and dig to the right depth, and watered regularly. I staked the tomatoes (badly) when the plants got tall enough. I need to do better staking next summer. Speaking of which, next summer I plan on doing tomatoes again, and one or two other things that might be more successful than zucchini.

These were the two biggest rewards of having a garden:
1) I love cherry tomatoes, and the best ones I've ever had were surprisingly from this garden. An earth-fresh vegetable that you've just plucked from the ground has a wonderful fresh taste to it that store-bought veggies seem to lose. I loved going out and plucking a ripe red little tomato off the vine and popping it right in my mouth when it was nice and warm from the sun. No pesticides to worry about washing off either. What a wonderful treat!

2) John actually ate a few tomatoes because he saw how they grew from our own plants. VICTORY! He also got to learn more about nature by helping out with the gardening, which he really enjoyed.

I went to Home Depot's Garden Center in mid-May, chose my four tomato plants, and planted them. Soon after that I bought some zucchini seeds and planted those too.

By mid-June, the plants looked like this. The zucchini sprouts are on the right end, and the rest are the tomato plants. 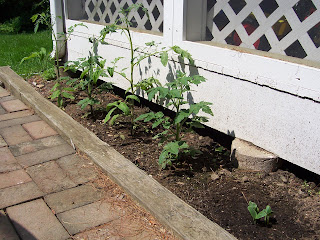 End of June. Note John's little broom I used for staking, since I didn't have any actual stakes to use yet! I didn't really know what I was doing. 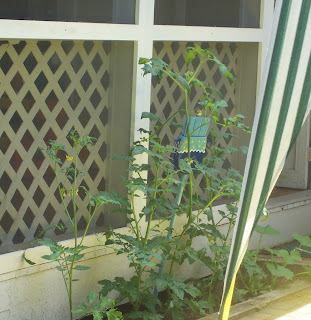 So a few weeks later, a kind friend gave me some of her old tomato stakes to use. 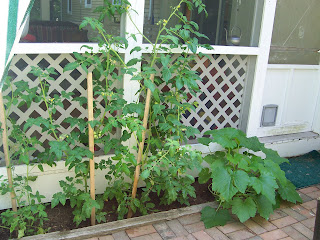 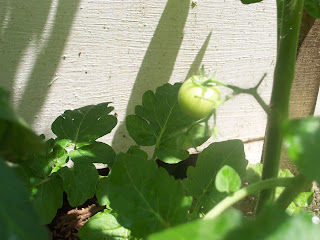 Soon after the first one appeared, little clusters of them came into being. 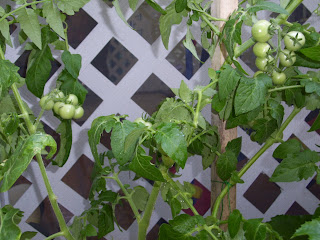 The zucchini plant sprouted this pretty yellow flower. I've heard that those are edible, but I didn't indulge. 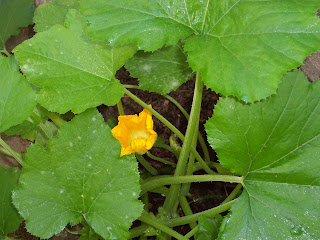 In the middle of July, we got a huge rainstorm, and it wreaked havoc on my poor little garden. Fortunately I was able to fix it back up. 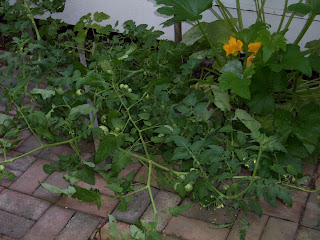 I was excited the day that I found the first red tomato! 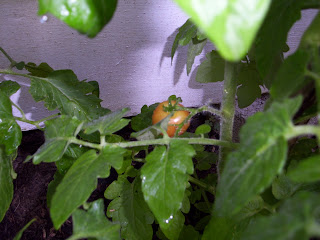 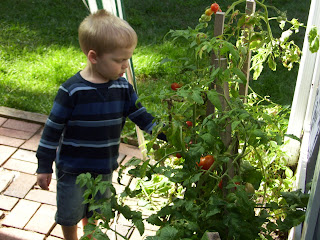 Puttin' the kid to work! 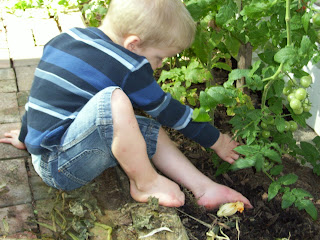 This is the failed zucchini plant that I uprooted and tossed into the woods that day. Some little animal had a feast on this every night during the summer. Maybe that's one of the reasons why it didn't sprout any veggies. More likely it was my own ineptitude. 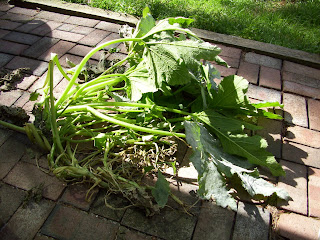 The sweet taste of success: He actually wanted to eat tomatoes! It made the months-long effort totally worth it. 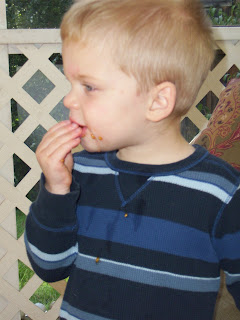