The fourth day of our trip was on Tuesday, April 29th (my niece Hayley's 16th birthday. We missed her!). It was one of my favorite days of the whole trip. We went to the following places: the Cayman Turtle Farm, the Tortuga Rum Factory, and we went to Hell!

Turtles are now one of my favorite animals. I learned a lot of interesting things about them from the guide and from holding and watching them. They're sweet and gentle, but not shy, and they are smart. There isn't another green sea turtle farm like this one in the world. It has hundreds of turtles that range in size from the smallest babies to what you see in the first picture below. Green sea turtles are endangered and that is why this farm was started. It's a wonderful place!

We couldn't believe how huge these turtles were. 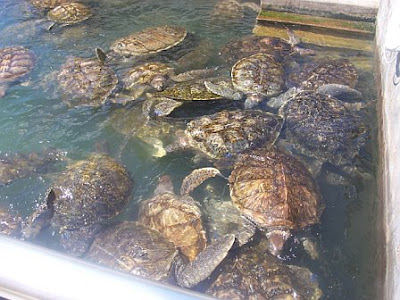 This sweet little turtle was flapping his legs a lot when I first picked him up, as if he were saying, "Put me down, put me down!" They like to be stroked under the neck, so once I did that he settled right down. I love the look of fear on John's face here. Needless to say, he wasn't interested in holding a turtle! 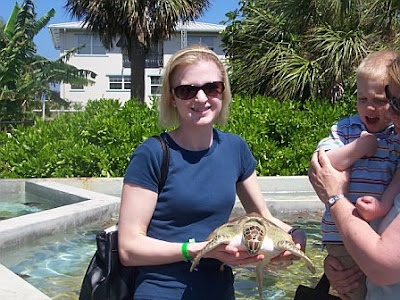 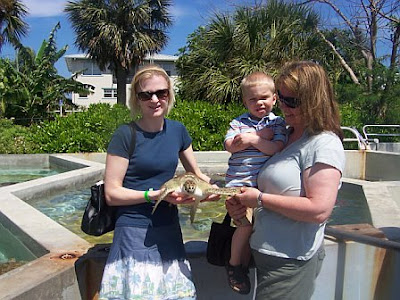 Meeting some of the bigger turtles. 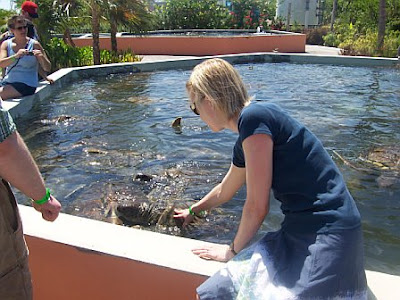 John faces up to his fear... 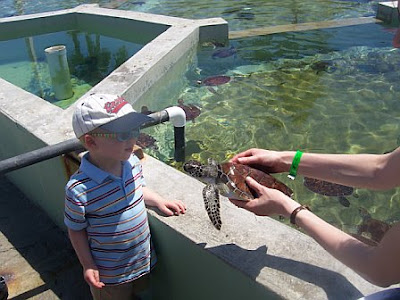 He loved feeding the turtles "snacks." It made him very popular with them. 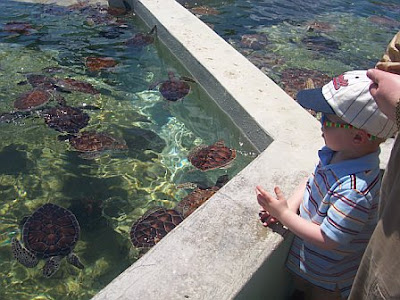 Out by the ocean (obviously). 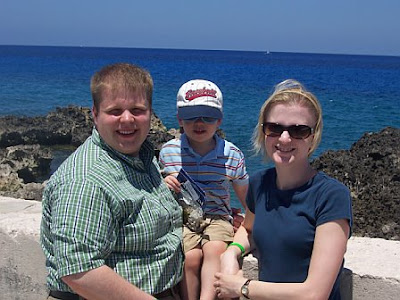 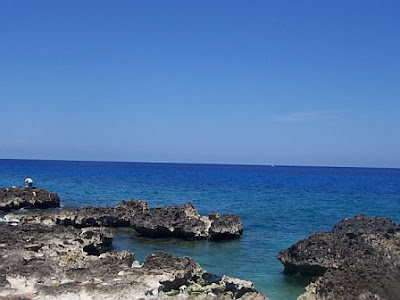 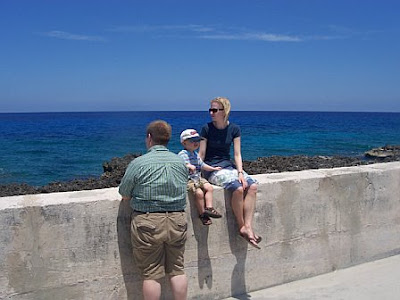 Peter got replaced at the Tortuga Rum Factory. 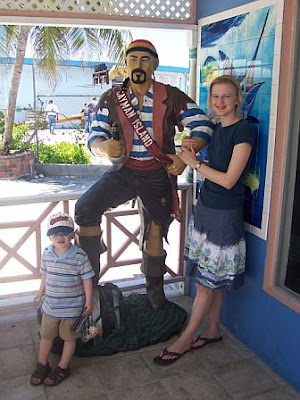 There's an interesting little place on the island called "Hell." I got such a kick out of saying things like "Tomorrow we're going to Hell" and asking Peter (the driver) "Do you know how to get to Hell?" It's named Hell because of the unique landscape that is reminiscent of what may come to mind when one thinks of hell. My mom bought a postcard that said "I'd rather be in Hell than at work" and sent it to her co-workers from the post office there, so that it was postmarked from Hell. Such a funny place, that Hell! 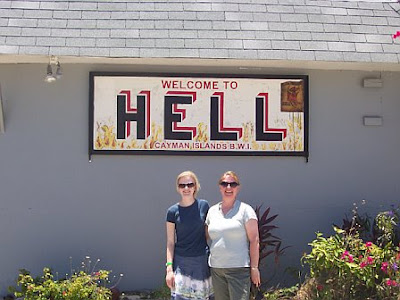 Undoubtably the ugliest place on the island. It resembles petrified wood. 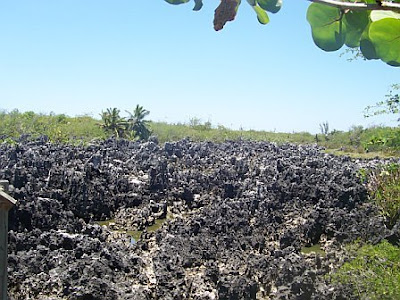 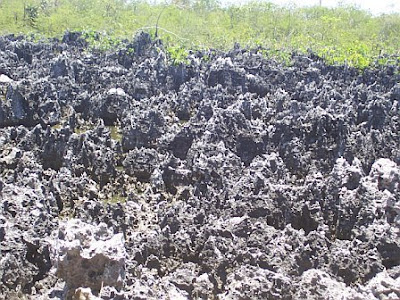 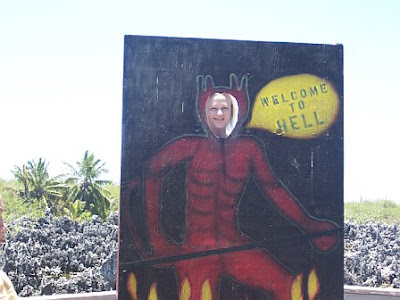 My little angel as a hellion? Never! 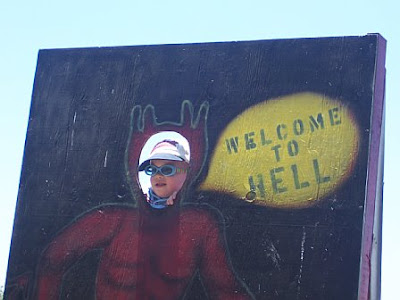 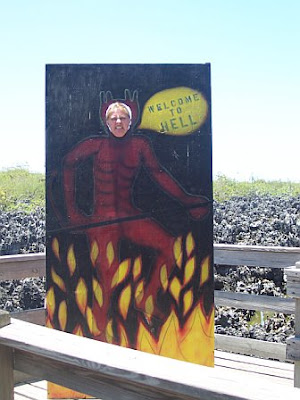 Later that day we went to a beach that had a playground. John was in heaven (not hell!) and refused to go down to the water. 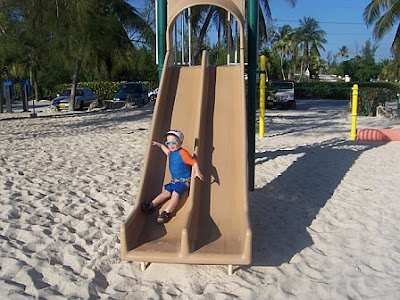 We had a nice dinner that evening at a place called "The Lobster Pot." This was the awesome view from our table. 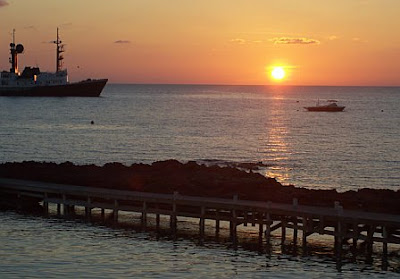 Here's Peter watching the terrapin sharks being fed scraps by one of the restaurant employees. It was really cool to watch. 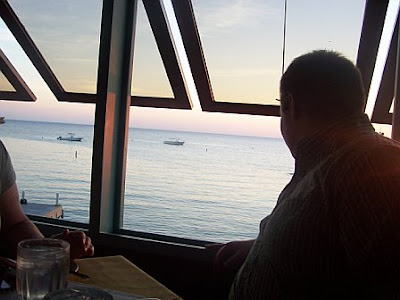 Ahhhh, home at last for the night. 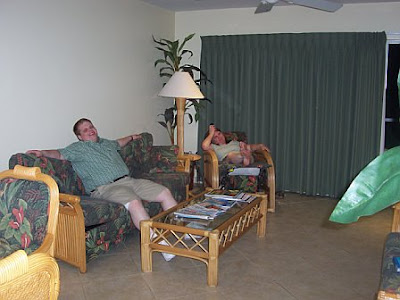