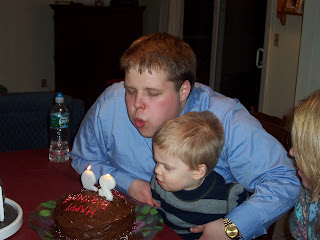 Peter was sick with a cold but not so sick that it had to change our plans. On Saturday my mother came to visit and she babysat John in the evening so that Peter and I could go out. We went to dinner at Max-a-Mia in Avon, a great Italian restaurant. For our appetizers we had calamari (mainly for Peter) and mussels (mainly for me). Peter had veal and I had chicken for our entrees, and I didn't even give him a hard time about the veal, which I've been wanting him to give up for years. I had a gigantic piece of chocolate cake for dessert which I couldn't even eat half of so I had it packed to go. I think Peter wished he had ordered that instead of the smaller, colder chocolate dessert that he got.

After our dee-lish dinner we went to one of our favorite stores, Barnes & Noble, to use all of the great gift cards we got for Christmas and also because we're nerds who like to go book-shopping for fun. Peter and I are addicted to buying and reading books. Our ideal house someday will have a library with built-in bookshelves lining the walls to hold our ever-expanding collection. He got about fifteen books that night! He'll probably have them all read in a month's time, too. 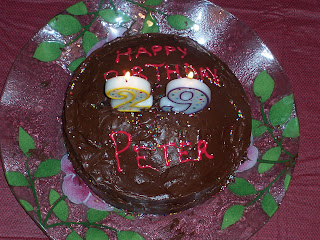 On Sunday I baked Peter a marble cake with chocolate frosting. It was good, but the top layer started to cave in a little bit, so it wasn't one of my best-looking cakes. Chef Pierre made an excellent dinner of chicken parm, pasta, garlic bread, and green beans. He and my mom watched the Patriots game, and Peter said that was his favorite thing about his birthday, because he got to watch the game and see the Patriots win to go on to the Super Bowl and make history with yet another undefeated game. Usually we don't watch TV on Sundays but it was two against one and it was his birthday, so I relented.

Happy birthday Peter! John and I love you!
Posted by Donna at 4:15 PM