Diary of our Holiday Week, Part 2 of 2

Friday, Dec. 28th: Today we went into Boston to take John to the Children's Museum. It was fun, and for the most part John had a good time. The problem with going to these places in Boston, however, is that they're always crowded, and going during a holiday week was no exception. So dealing with that wasn't so fun. Also, the Museum was nice but a little disappointing. It had no planetarium or solar system things (which is what John really loves) and no live animals except for some turtles and fish. The children's museum in West Hartford has all of those things and I think we all kind of preferred Hartford's children's museum to Boston's, which is kind of a surprise. Next time we're in Boston we'll go to the Science Museum, which has a really neat planetarium, and we'll try to go during an off-peak time. 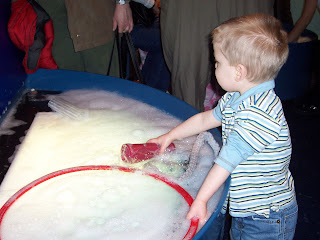 His favorite thing was playing in this Indian dug-out canoe. 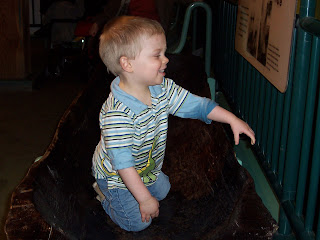 (That's my mother in the background over John's shoulder.) 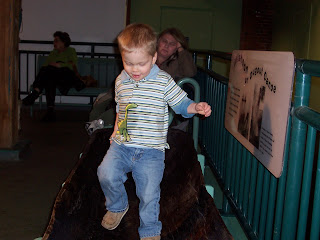 "I wanna steer the boat too!" 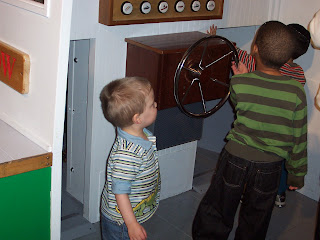 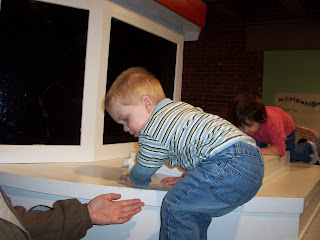 In the evening, Peter and I got to go out on our own. We went out to dinner to a great seafood restaurant in Framingham, where the lobster bisque actually had chunks of lobster in it. You don't find that very often. The food was delicious. (We ate so much great food this holiday week!) After dinner we went to the movies and saw National Treasure 2, the sequel to one of my favorite movies. Although the first one was better, it was very good and anyone who likes American history will enjoy the movie.

Saturday, Dec. 29th: In the morning I went to Salon Entre Nous in Southborough where my sister Elizabeth works and I got a facial and I also had my eyebrows shaped and waxed, which I'd never had done before. It was really nice and my eyebrows have never looked better. Thank you for the gift certificates and discount, Elizabeth!

For most of the rest of the day, we were in Rhode Island doing Christmas dinner and gifts with Peter's family--his parents, his brother Paul and his wife (Jean) and son (Andrew), and his brother James and his wife (Stephanie) and daughter (Arielle). We had yet another delicious dinner and then took a few hours to open presents. I'm not joking. Peter's mother always buys tons of presents for everyone and you practically need a U-Haul to get it all home! Fortunately we brought two cars, so we were able to fit everything in. We needed two cars anyway so that I could return home to Mass. with John after presents were done and Peter could stay and watch the big Patriots game with his family on James' huge HDTV. (The Patriots won, by the way, and made history by winning all of their games this season. Even though I'm not a big football fan, I was happy about it. Go Pats!) 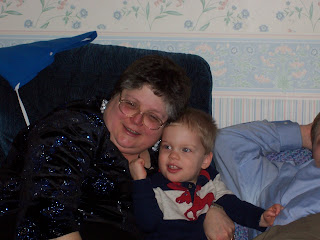 Bouncing on a present. Peter is laying down on the recliner underneath. Funny! 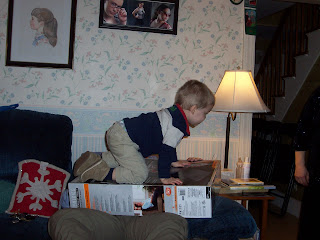 Sunday, Dec. 30th: Today we didn't wake up in time to go to church with my mother since we were all up pretty late last night. I was a little disappointed because it's always fun to see old friends from the past at church, but oh well. We went and visited my grandmother, who lives right here in Hopkinton. I finally gave her a framed picture and her own photo album of our wedding pictures. (It only took me five-and-a-half years to do that!) It was nice to see her again.

The highlight of my day in terms of humor was watching a cheesy 1980's video about the Cayman Islands that my mother had checked out from the library since we're going there on vacation in the spring. The video was so contrived, and the swimsuits, fashions, and hairstyles of the 80's always make me laugh. Ha ha! For dinner, we had my mother's delicious beef enchiladas (we REALLY ate well this week!). We decided to return home to Connecticut after dinner instead of on Monday morning as previously planned because of the snow and also because Peter had some business that he needed to take care of on Monday morning. Home sweet home!

Monday, Dec. 31st: This has been a mostly boring day at home, just getting unpacked and back into the swing of things. The most "interesting" thing to report about today was that we took our Christmas tree down. We meant to do that before we left for Massachusetts but we didn't have time. I have never seen such a dead Christmas tree. There were pine needles galore all over the floor and it took awhile to take down all of the ornaments and lights, get the tree out of the stand and out the door, and then sweep and vacuum everything up. It's kind of a relief now to have it gone--no more pine needles and the biggest thing to take care of post-Christmas is done. It's hard to believe that one week ago at this time it was Christmas Eve and the tree was all lit up in its glory and beauty with presents nestled underneath. Now it's stripped bare and lying out in the cold woods. Kind of a depressing thought! Anyway, I'm spending a lot of time talking about the tree so I'll stop now.

Tonight (New Year's Eve) we're not doing anything very exciting, nor are we tomorrow. So that is why my diary of our holiday week will end now, because I don't want to bore you to tears. I hope you all had a wonderful Christmas and that the New Year will be a very good one for you. Happy New Year!

P.S. The pictures are now posted below on "Part 1" of our holiday week.