As you can see from my last several posts, April was a busy month that was full of good things--our vacation to Orlando, John's prom, Easter, and General Conference. There was one thing, however, that cast a cloud over much of the month, and that was Violet's botched tooth removal surgery. She had a few teeth that were fractured and needed to come out--one tooth in particular, but the doctor decided to remove a few small ones too, and that's ironically where the subsequent infection may have come from.

She was doing well the day after the surgery, but the morning after that, her right eye started to swell up badly and she wouldn't eat anything or take any of her post-op medications. It was really scary. She was miserable, and I didn't know how to help her. I took her back to the vet hospital a couple of times, and my wonderful home vet came over several times during the weekend to give injections of her medications since she wouldn't take them orally. It was very scary for a few days. I was so worried that my innocent, lovely, healthy "girly" (as I like to call her) might die, all from a seemingly simple tooth removal procedure. I'm not sure what exactly went wrong there, but the doctor who did it felt terrible, and I understand that it was a rare fluke. She had removed some of Bentwood's teeth the year before with no problems.

Not only was poor Violet's mouth hurting from having teeth removed, but now her right eye was swelling up too. She looked (and probably felt) like a zombie dog. 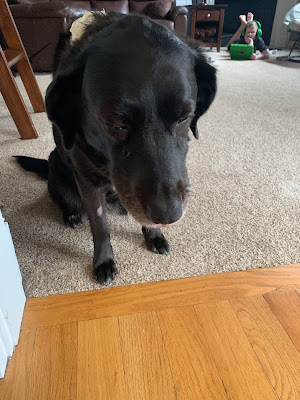 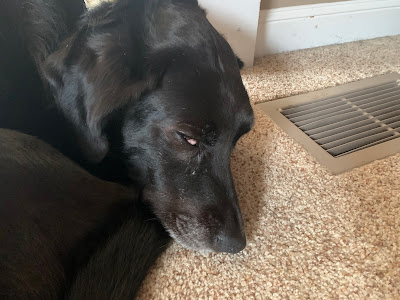 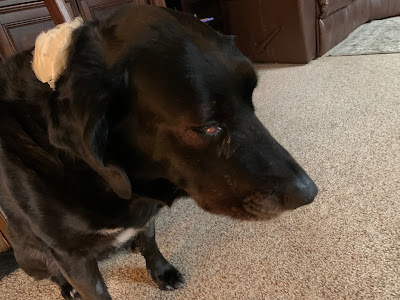 Waiting in the car at the vet hospital for her turn to go in. She looked fine from the left side, but from the right side it was a whole different story. 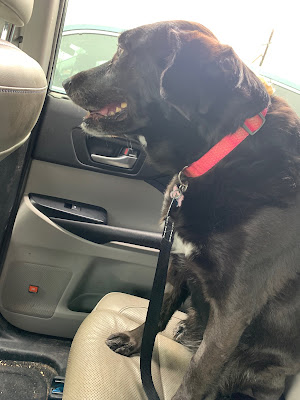 Once she was drugged up, she was able to rest. 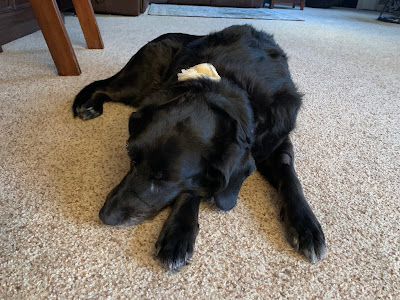 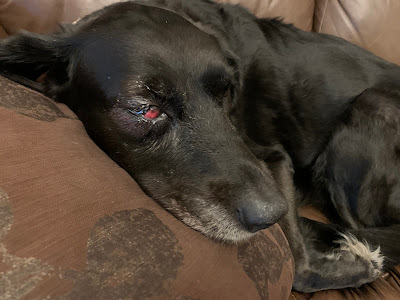 One of the hardest things was getting her to eat. She had to eat a soft special diet for a couple of weeks anyway because of the teeth removal, which normally she would have loved, but because of her pain and discomfort it was very challenging to get her to eat anything. But her favorite human food of turkey pot pie did the trick. I cooked a few up just for her and mixed her medication into that and it worked! She still needed some coaxing at first, but she ate, and then she went on to eat the special canned food too, and she got better and better about eating as the days went by. It felt like a personal victory every time she ate! 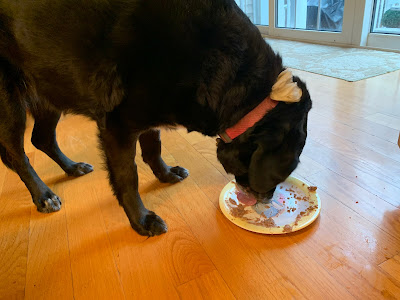 An empty turkey pot pie bowl that she licked clean, and some other good stuff on the plate! 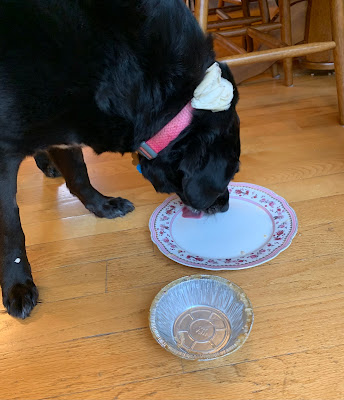 It was a little hard to go to Florida because I had to leave when we'd finally gotten into a good, consistent feeding and medication routine, but my sister took good care of her while I was gone, and her eye continued to heal. 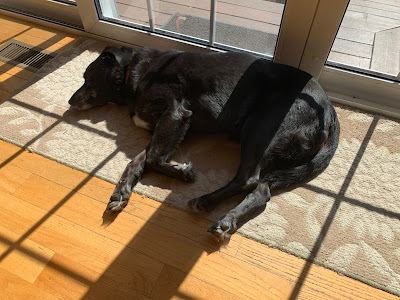 This was some of the canned food she ate. She was fed like a queen for a few weeks! 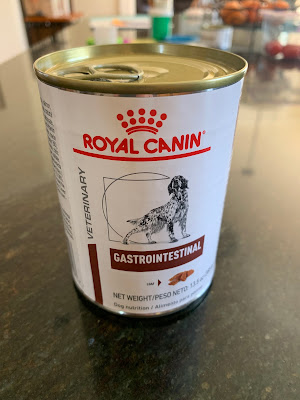 She was on antibiotics through mid-May to make sure that whatever bacteria that may have caused the eye infection was completely wiped out. She's been fine since, with everything back to normal, but I do think it's likely that the vision in her right eye has been affected, which is sad. But I'm so thankful that she's still here and doing well. I love my girly-girl and I benefit greatly from her constant faithful companionship.
Posted by Donna at 1:17 PM