There's a Snapping Turtle In My Pool!!

Before I get to the snapping turtle excitement, let me first address part of what I think led to it being there. Friday, July 9th, was a very rainy day here in Massachusetts. We were hit with Tropical Storm Elsa and it rained buckets all morning and into mid-afternoon before it stopped. 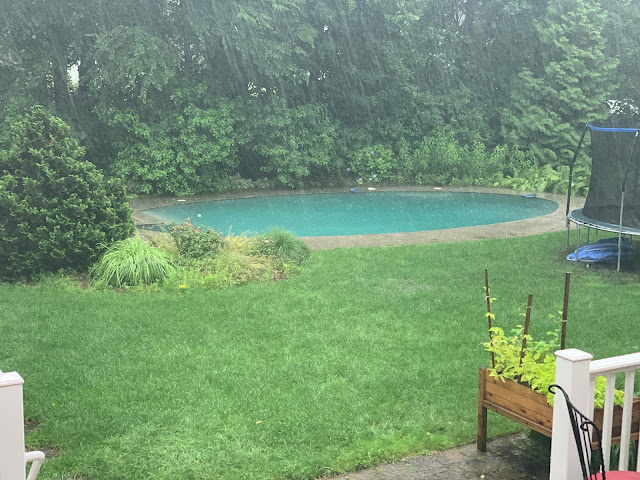 After the storm had passed when all was (apparently) calm and clear, I went out to check on the pool because the water was right up the edge. I'd never seen it that high before. 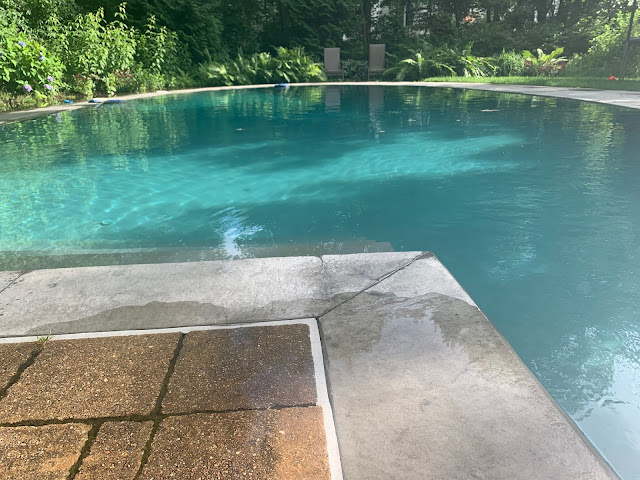 The water was indeed slowly overflowing on this edge of the pool. 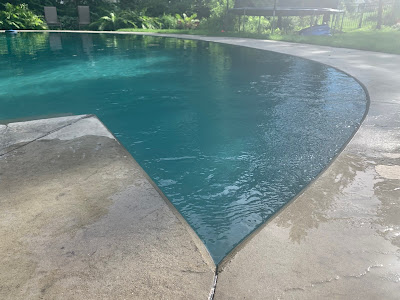 There wasn't much I could do about it so I just let nature take its course (no pun intended) and it turned out to be fine.
Now for the excitement! While I was out there, I saw something big and dark moving around on the pool floor. I couldn't tell at first what it was, and then as I watched it some more, the horrifying realization dawned that it was a turtle. And not just any turtle, but a big snapping turtle. 😱 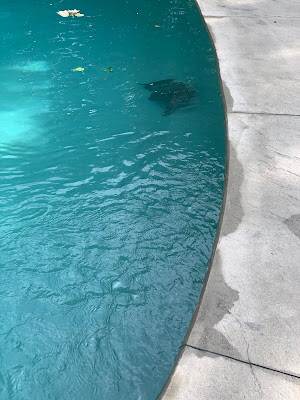 I couldn't believe it! We've had frogs and mice and chipmunks and even a baby bunny in the pool (😥), but there had never been even a normal little turtle in the pool, and now there was a big snapping turtle?! Where did it come from? My guess is that Elsa must have disrupted its natural habitat in the woods around my neighborhood. It had found its way to my yard and pool and made itself at home. I should have named it "Goldilocks"! 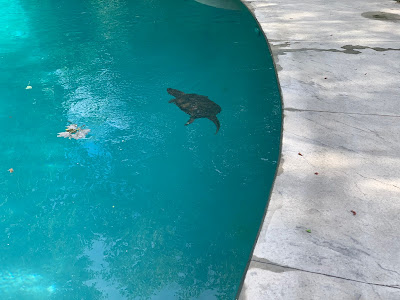 Elizabeth and Rocco were the only other ones who were home. They were also blown away by our exotic guest. 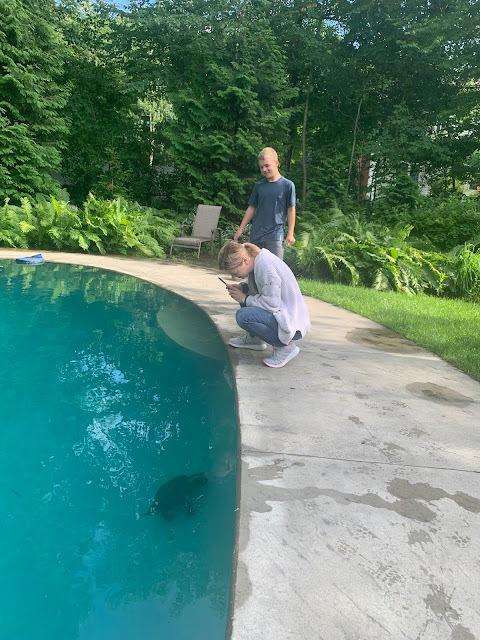 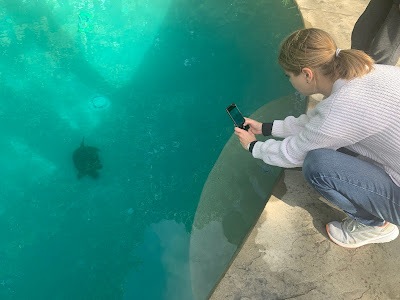 It wasn't shy and swam right up the surface. Elizabeth wasn't shy either, but Rocco and I were! 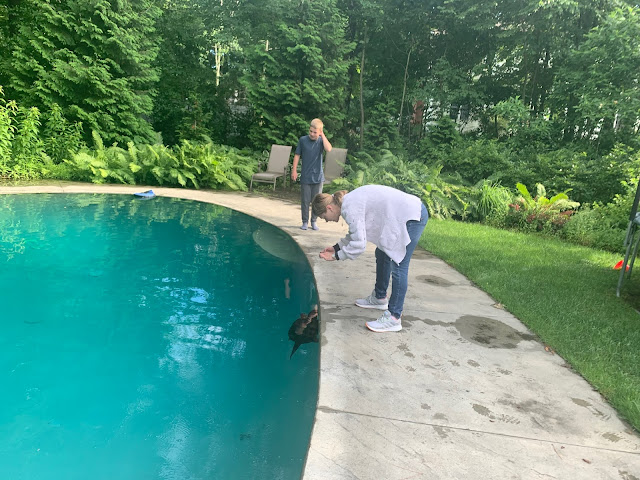 This is one of the pictures that Elizabeth risked her life to take. 😅 Look at those claws! 😲 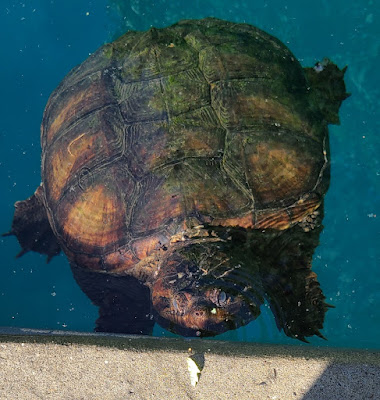 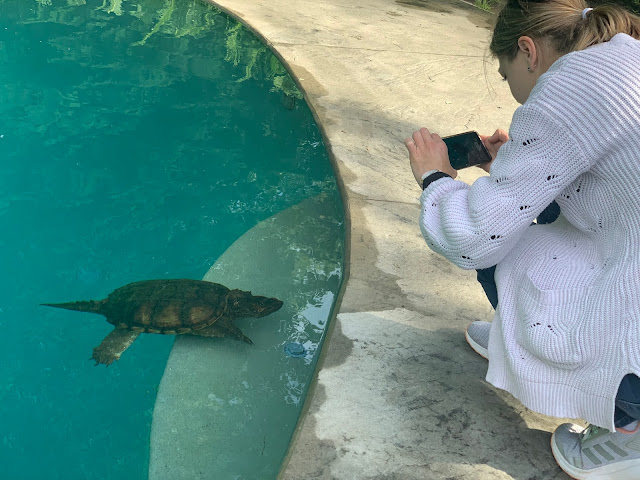 Do you see it? 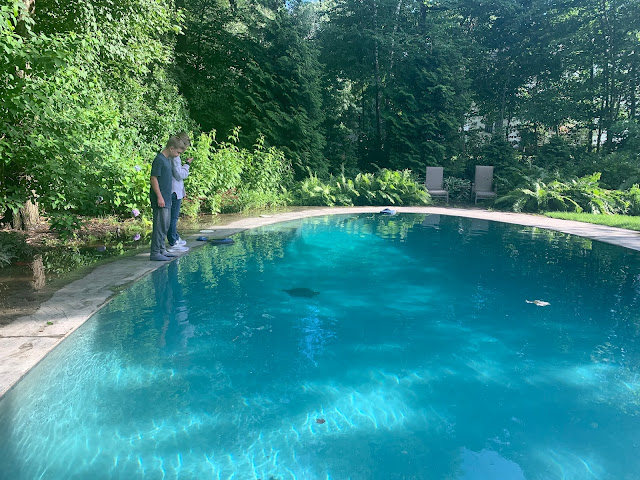 We didn't have the equipment or the know-how for getting the turtle safely out of the pool and relocated without doing harm to it or ourselves, so I called Animal Control. There was no answer. So I called the police, and two officers stopped by to help out. They were young and cute and Elizabeth instantly had a crush on one of them, who she has dutifully stalked ever since (just kidding--kind of 😆). The cops and Liz got the turtle out of the pool with shovels (it wasn't hurt) and deposited it outside of the gate surrounding the backyard. I put the pool's inflatable solar rings up against the bottom of the gate where I think it walked under to help keep it out. 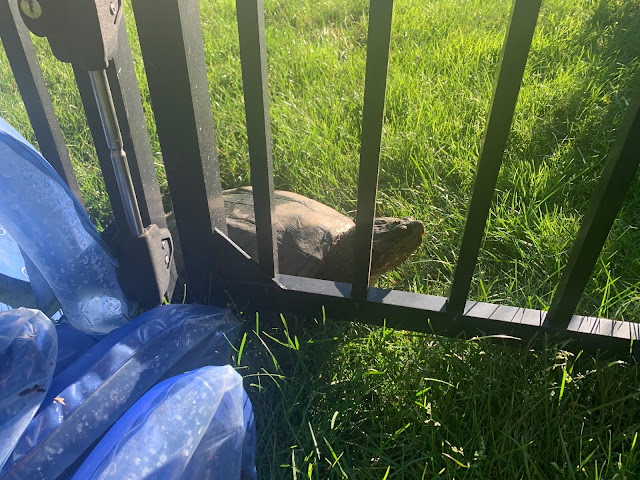 I
It was trying to get back in! 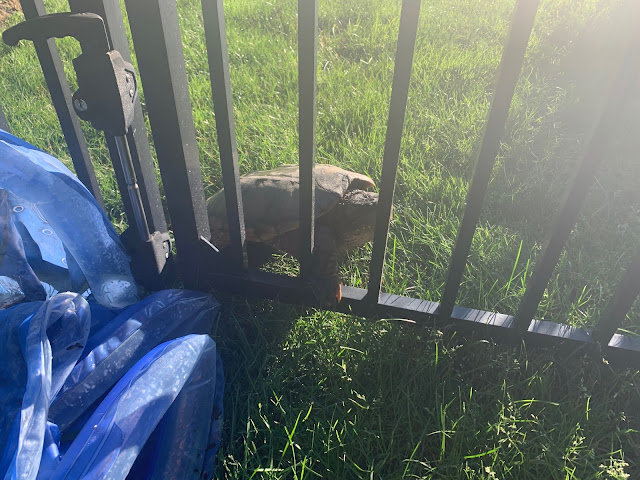 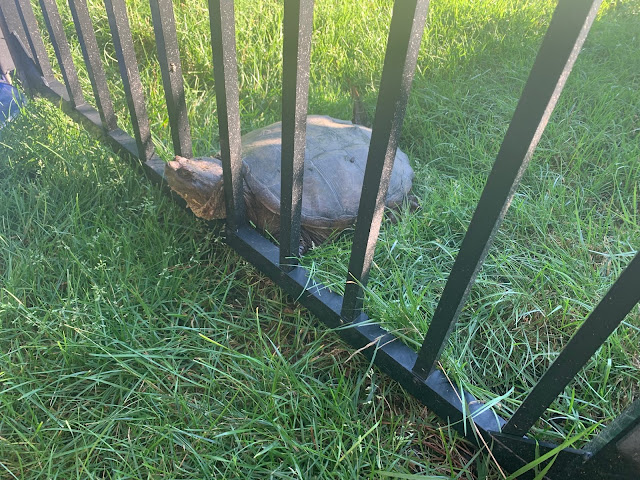 It reminded me of Godzilla. 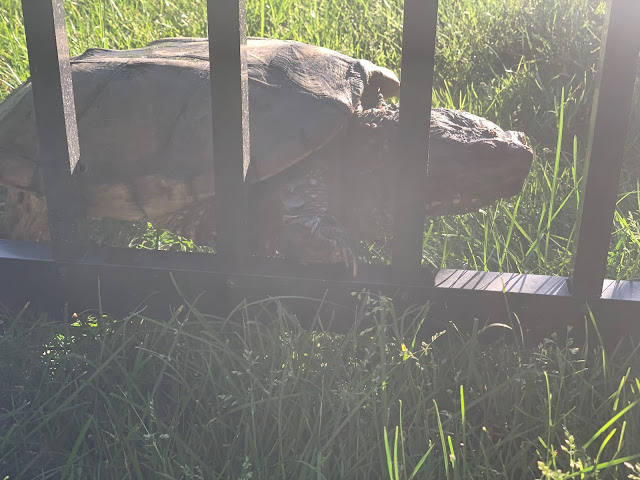 Violet was one of the reasons why we needed to be sure it wasn't in the yard. It could really do some damage to her. And to all of us! 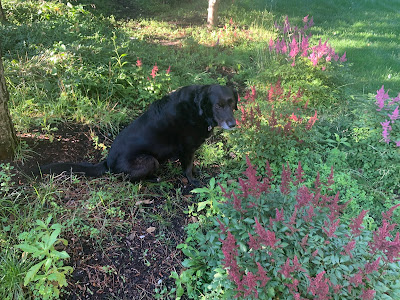 I posted this picture on Facebook and my aunt had a clever comment about how the police came and now the turtle was behind bars. 😂 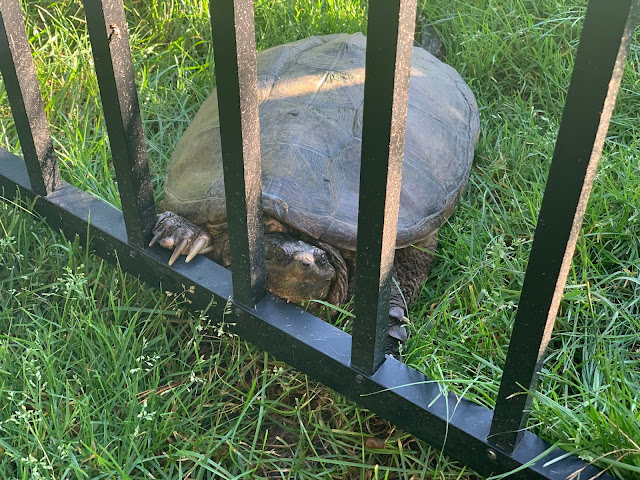 A little later that evening, the turtle had disappeared. We didn't know where it went; we were just happy that it was gone. We hoped that it had made its way across the street to a lake or stream in the woods, which is where I think it came from. But no. The next morning, it was back in the pool again! 🙈 It had found a way in! And it stayed all day. I was leaving on a road trip that weekend and Animal Control still wasn't calling me back, so my friend Brian came to the rescue the next day and came over during another rainstorm and got the turtle out and relocated it to a nearby lake. He was our hero!
So that's the crazy story of a snapping turtle being in my pool. And I sincerely hope it's a story that will never again be repeated! 🐢
Posted by Donna at 1:30 PM