When I get things for my house like furniture and decorations and rugs, I tend to keep them for a long time. We still have two IKEA bookcases, an end table from a friend's garage sale, and our four-poster bed, all of which we got when we were relatively poor newlyweds fresh out of college. Even though our financial situation has progressively improved over the years, we still use those bookcases, end table, and bed because they're just fine. If it ain't broke, right? I felt the same way about our 5x7 living room area rug, which we've had for fourteen years. I liked it a lot but I finally decided to replace it in order to fill up the space in our new living room better. It was time for a rare upgrade! 🎉 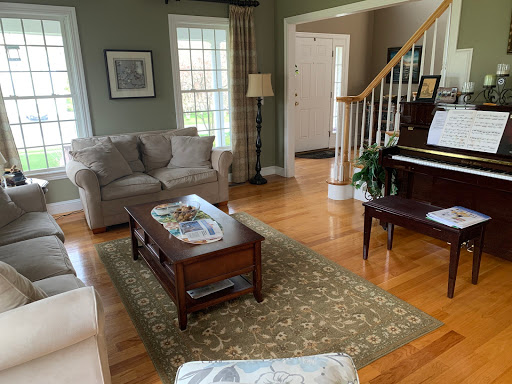 I bought the old rug at Target in 2006 when we moved to our first-ever house in Connecticut (before that we lived in a condo in New Jersey where there was wall-to-wall carpet). The rug laid on the living room floor of the Connecticut house for four years, on the family room floor of our Iowa house for eight years, and finally on the living room floor of our Massachusetts house for almost two years. It held up remarkably well, especially since it only cost around $100. It was versatile and attractive in three different homes. I was attached to it for a variety of reasons, two of them being that my babies crawled across it and played on it, and beloved pets who are now gone laid on it.

It matched the paint color in the living room nicely. Green is my favorite color. 💚 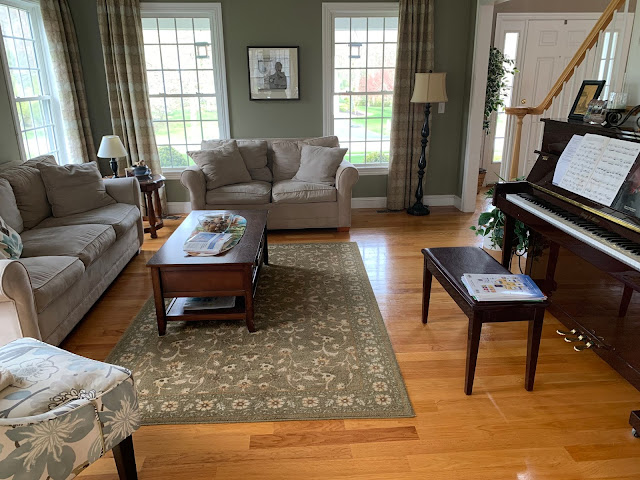 It was a little small for the room but I was fine with that for our first almost two years in this house. I think it was being home all the time this spring that made me finally decide to replace it. 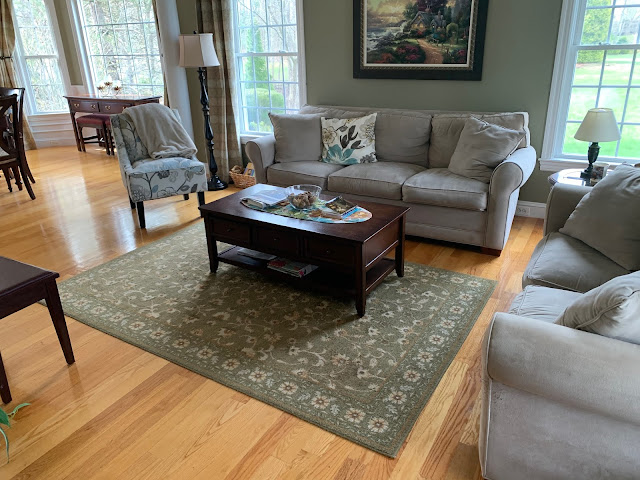 Once I decided to get a new rug, I shopped online and looked mostly at Wayfair, Joss & Main, and Target. I struck gold again with Target. They have an impressive selection of rugs on their website. The rug I ended up choosing is a beautiful one from the Safavieh brand so it was pricey, but because I keep things for so long, I'm willing to pay, especially for a high-quality brand like Safavieh. I bought a smaller Safavieh rug from target.com for the family room when we moved to Massachusetts two years ago and I've been very happy with it.
"I'm coming for you, old rug!" 😅 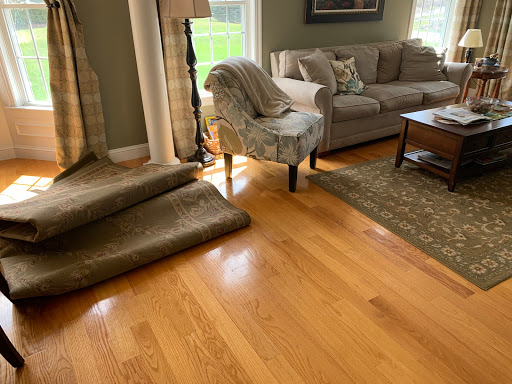 The new rug size is 8'9" x 12, which is perfect for this room. An 8x10 would have worked too, but I think this size filled out the room better. 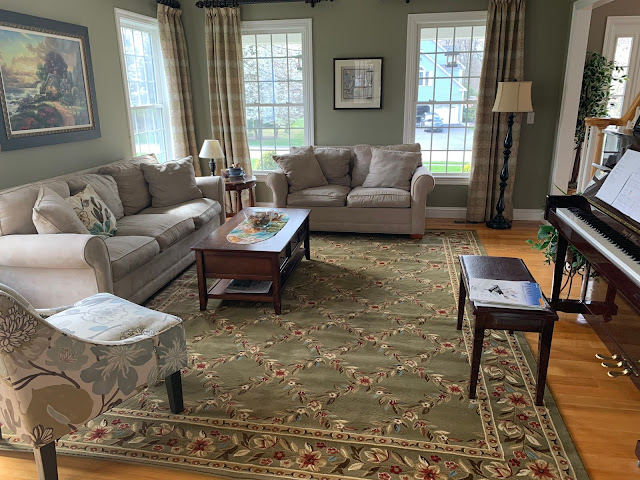 I really like the colors and the pretty floral pattern. The colors coordinate well with a lot in and around the room... 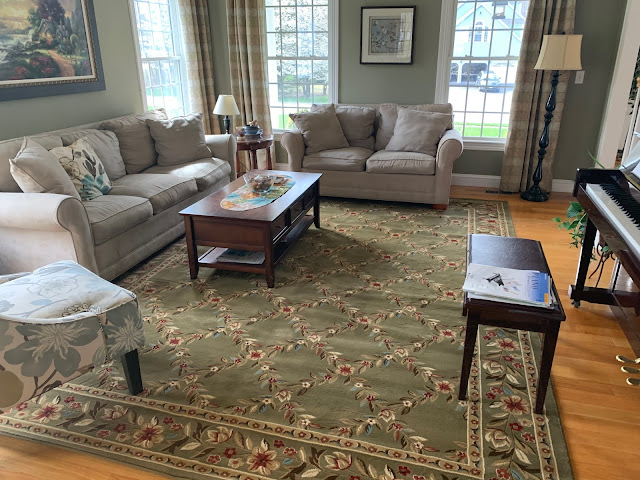 ...but not really with the chair (which I also got at target.com, by the way). But it doesn't bug me that much. At least not yet. 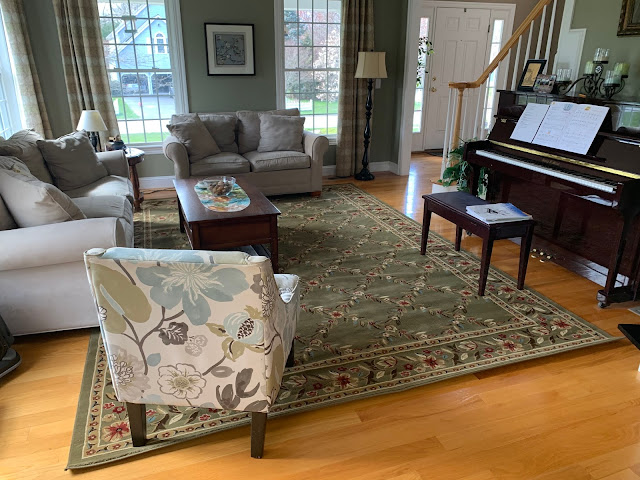 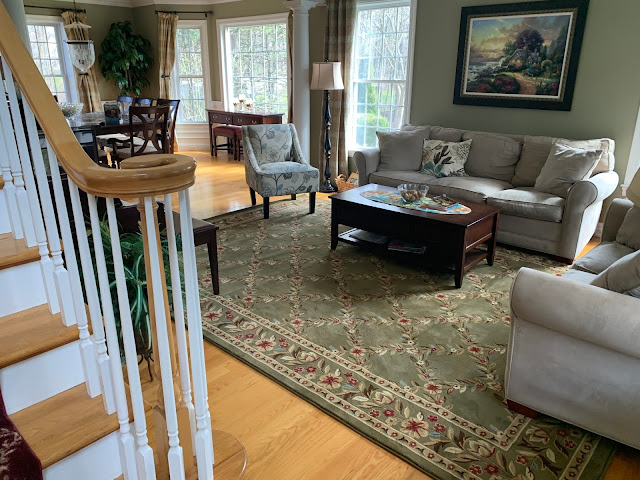 It's a thicker, cushier rug than the old one, which Boo Boo and Violet appreciate! 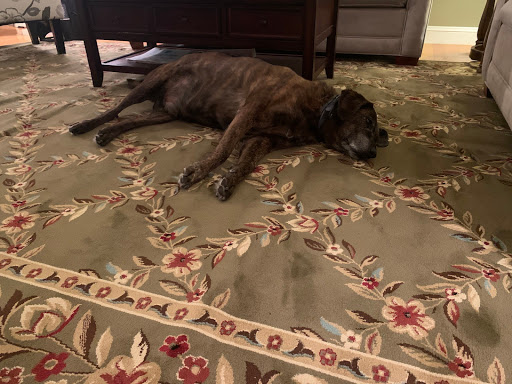 I'm really happy with the new rug! I'm sure we'll have it for a long time (knock on wood).

What happened to the old rug, you might ask? I still have it. I couldn't bear to part with it because I'm terribly sentimental. It fit a space perfectly in an upstairs closet under the eaves. I have visions of myself using it as a meditation or yoga spot. It hasn't happened yet, but it doesn't mean that it won't. In the meantime, I've got both my new rug and my old rug and life is good as far as rugs are concerned. 😄