1. I've been really busy the last few weeks with various things and so I've had no time to blog. I'm planning on blogging for the next two weeks before we leave for a trip, and then probably for a week or two after we get back, and then I'll take the rest of December off like I usually do so that I can have more time to indulge in ideal holiday rituals like reading by the Christmas tree instead of sitting at the computer (as much as I sometimes thoroughly enjoy sitting at the computer!). So that's my blog plan for the rest of the year! Just in case you were wondering. Which you probably weren't.

2.  My dad's been visiting the last few days and he left this morning to return to Utah. It's nice having him here, but among other things, he is a Nutrition Nazi, which makes it difficult to eat and drink in peace in my own house. "Killjoy" doesn't even begin to describe my dad when it comes to food.
Get ready for a rant! Not against my dad, who I love, but against his die-hard nutritional standards!

I think that I feed myself and my family pretty well. I buy organic produce, meat, milk, eggs, etc. whenever I can. I almost always get 100% whole-wheat bread and multigrain pasta. I try to stay away from foods that contain things like high-fructose corn syrup. I'm conscientous about serving size, and we only eat meat about 3-4 times a week, and usually one of those times it's fish. There's hardly any stuff like Cheetos, Pop-tarts, Oreos, sugary cereals, and soda in the house. But still, it's not good enough for my dad's high and exacting standards! I estimate that over 90% of my dad's diet is vegetables. Not only that, he eats at exact times of the day and he only eats food in certain combinations. He feels that everyone should eat this way, and that if they don't, they're either ignorant, or they haven't grown up and don't love themselves enough and that they're on the road to getting diseases like cancer. He psychoanalyzes people based on what they eat. Try having a relaxing meal with someone who does that!!

My dad thought I was making a bad decision to go out to eat with Peter at 8:00 p.m. on Saturday and that it would mess me up and make me gain weight and give me problems like Irritable Bowel Syndrome, which would then make me a patron and victim of the multi-billion dollar pharmaceutical industry. I made a delicious crockpot beef stew on Sunday with grass-fed beef and all organic vegetables, but he would not partake (in part because meat and potatoes eaten together is a big no-no). He disapproved of the Hawaiian Chicken over rice that I made another night, although there was broccoli and cauliflower on the side. I think both of those meals had good nutritional content, but I'm sure he was envisioning them wreaking havoc on our intestines.

The one easy thing about my dad visiting when it comes to food is that I don't have to feed him since he buys and eats all of his own food. But it's hard to eat and to feed your kids when he's watching and making (mostly silent) judgments. My kids are not going to get sick and be unhealthy because they eat things like yogurt! I just don't believe that. And I don't dislike myself because I eat cereal for breakfast, or because I sometimes eat a meal that doesn't contain any fruits or vegetables. It's because I like myself that I treat myself to special treats like hot cocoa with whipped cream on top, as well as to healthy foods that I know will help take care of my body.

That all said, even though he drives me nuts, it was good to have my dad here. And I do think he's right when it comes to some things about nutrition and food. I just wish he weren't such an extremist about it, and that he wouldn't judge people so much based on what they eat.
Anyway, I'm glad that I can eat in peace again. I'm gonna go eat some peanut M&Ms.
{End rant.}

3. I didn't have a Halloween costume because I had nowhere to wear it, but if I'd gotten one it would have been a Downton Abbey costume! I was so happy to come across these costumes in a catalog I was flipping through one day! 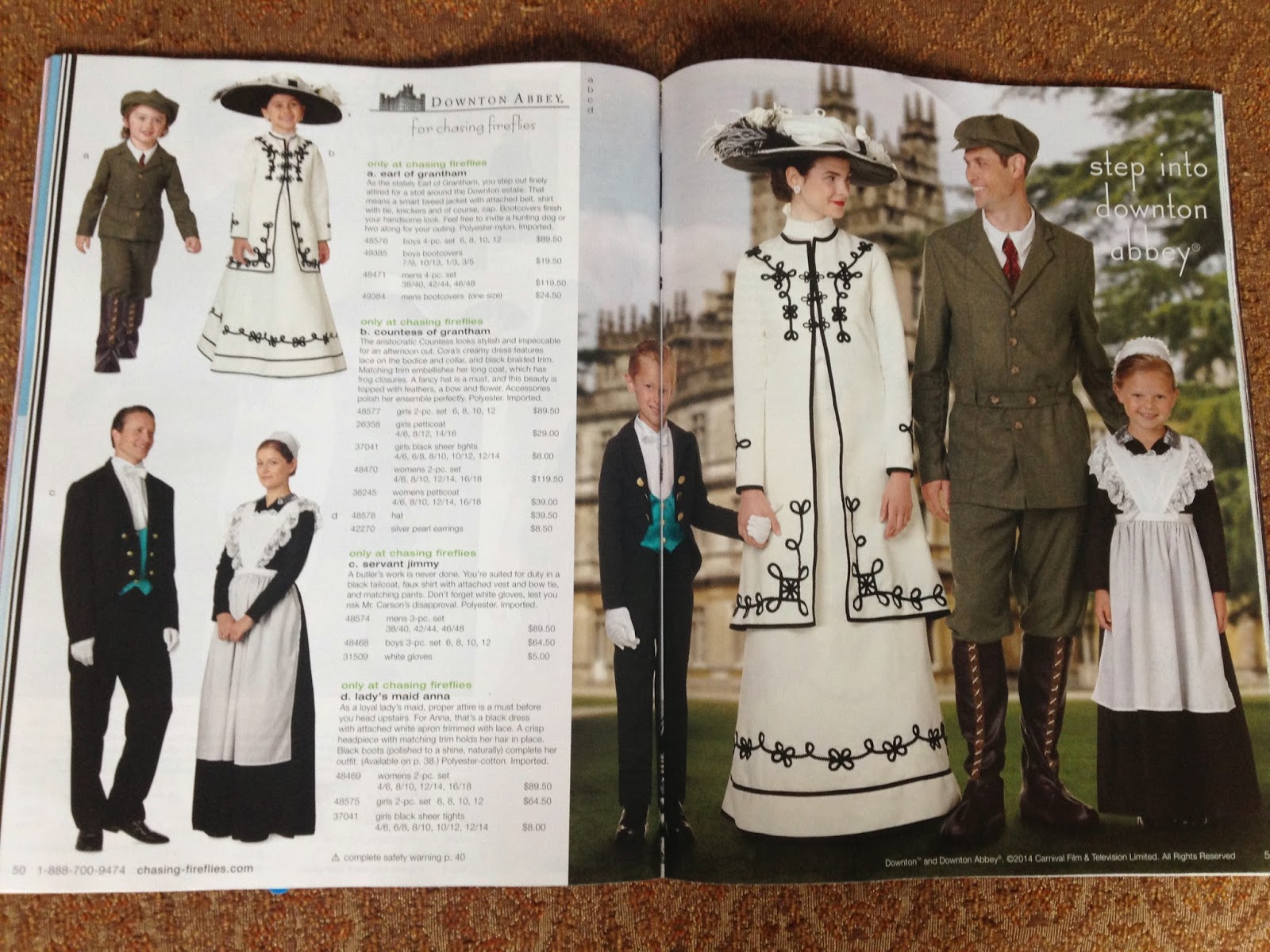 I'd rather be a lady than a maid, but I liked the maid and butler costumes better than Lord and Lady Grantham's, so that's what I would have picked. I hope someone has a Halloween costume ball or party in the future so that Peter and I can wear matching maid and butler costumes together! (I'm not about to throw one myself--that's not my idea of fun! Attending one, however, is my cup of tea.) 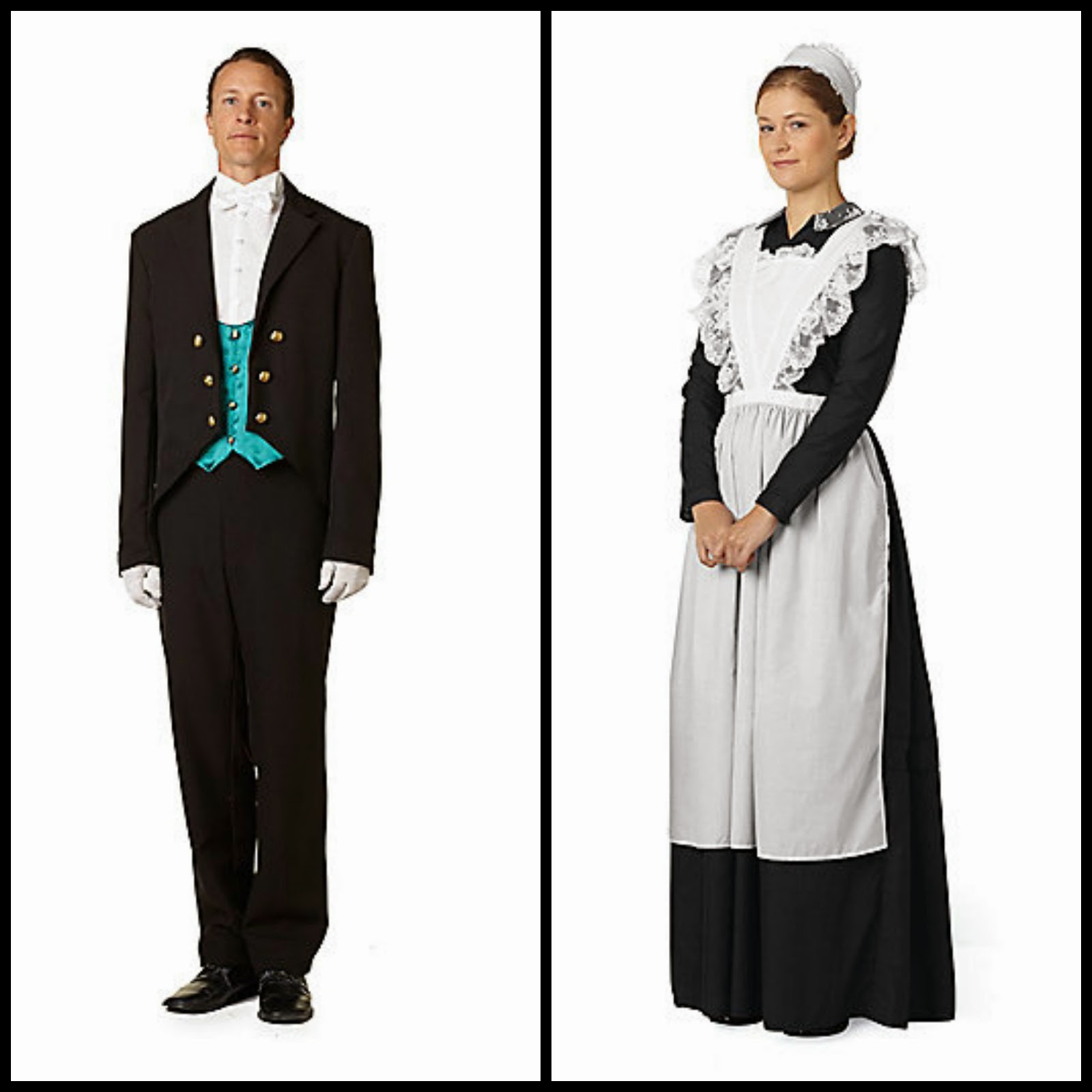 4. November got off to a weird start. On Saturday morning, the day after Halloween, I woke up with swollen eyelids. It looked weird and felt uncomfortable and I had to wear my glasses for the day and no eye makeup at all. I was quite the beauty that day. The next day my eyelids were a little better, but they were still swollen, red, and tender. I looked like I was wearing red eyeshadow above and below my eyes. (Maybe my body was trying to compensate for my lack of makeup?) It's gotten progressively better this week and now my eyes are pretty much back to normal, but only after a few days of having some really funky redness and dry lines under my eyes, making me resemble a zombie if you looked closely enough at my face.

Fortunately I figured out the cause of my eye problems: it was a new moisturizer I started using last week. Once I stopped using it, the symptoms started going away. I've used mostly Olay sunscreen moisturizer ever since I was a teenager, but every now and then I like to try something new. I think I'll just stick with good old Olay for my morning moisturizer from now on. It knows and loves my skin and takes good care of it! 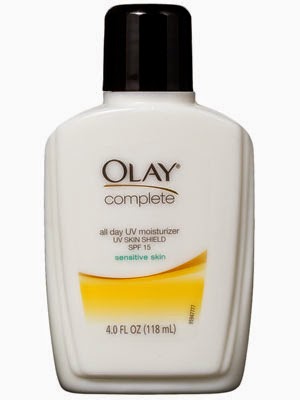 The moisturizer that caused this allergic reaction was Garnier Ultra-Lift Transformer, which must be full of a potent mix of chemicals, the most active ones being "octisalate" and "octocrylene." Those don't sound like things that should be spread on one's face. My doctor said that she's seeing more and more patients who are having allergic reactions to beauty products. I googled the moisturizer and found a number of similar complaints to mine. What the heck are they putting in these products? I'll be reading labels and researching ingredients more carefully in the future, and sticking with my tried-and-true favorites in the meantime (and probably in the future too).

5. Get ready for another rant!
I was so glad that Joni Ernst won the Senate seat for Iowa, and that so many Republicans won across the country, and that they are in control of both the House and the Senate now. Watching the election results on Tuesday night was fun and rewarding for the first time in years!

I'm not normally a very partisan person. I'm an independent but I definitely lean to the right, so I registered as a Republican a few years ago so that I could vote in the presidential caucus in Iowa (Mitt Romney was worth it!). Because of President Obama I have become much more cynical and skeptical about politics and Washington than I ever was before. I was optimistic about his presidency when he was first elected in 2008 but that optimism has been replaced by disillusionment, and now I can't wait for his term to be over. I think he's a good person but I honestly think he's the most inept President we've ever had. I don't trust him at all because of how he's pushed his very liberal ideas and philosophies on America. That degree of liberalism is NOT representative of the majority of this country, and that fact alone makes it wrong for him to do that. I truly think that in 2012 voters did the majority of the country a huge disservice by re-electing him.

I'm glad that the Republicans are back in power, and hopefully they'll be able to help counter and reverse the mostly ineffective policies of Obama and the Dumbocrats. (I'm way too pleased at how I came up with that this week. Please don't take offense if you're a Democrat. I don't mean you. To be fair I thought of a snarky take on "Republicans" too but that will remain unpublished because it's my blog and I can do that.)

6. I'll conclude on a lighter note! A friend of mine from college is an architect in New York City, and he's been working on the new Freedom Tower. His team was at the World Financial Center for an annual charity competition the other night and they built an 8-foot tall owl made from over 5,000 cans of food that will go to charity. This is awesome in so many ways! Mostly because of the owl. Just kidding. (Not really. #crazyowllady) 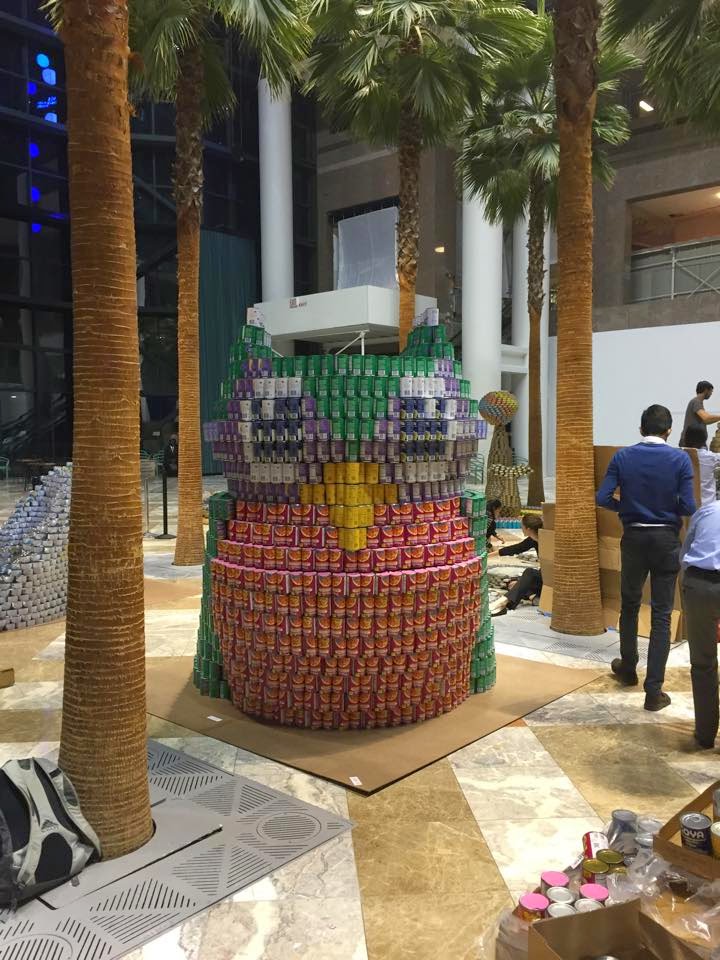 I hope this post hasn't left you with the impression that I'm a father-bashing, Democrat-hating, crazy owl lady with a creepy eye problem. I'm only one of those things! Ha ha.

This weekend we're having a family movie date to see Big Hero 6 (which I'm guessing Disney is hoping will be this year's big hit, akin to last year's Frozen). Peter and I are looking forward to seeing Interstellar, which is getting very good reviews, but we're going to have to wait until next weekend to see that one.
Have a great weekend!