2. There was a picture on Pottery Barn's Instagram account this week that had my dream bed in it. It was on a beach and it was the loveliest picture of a bed on a beach that I've ever seen. I very much wanted to put it on here, but Instagram won't let me do it and I can't figure out how to get around it. All I was able to manage to get from Instagram was my profile picture and Pottery Barn's PB logo. Ha ha! 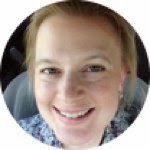 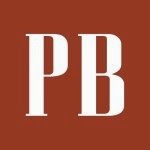 Oh wait, look! I figured it out! Don't ask me how because I'm not sure.
This bed on a beach would be a dream come true (barring any rain and bugs!).
Absolutely lovely! Just looking at this helps me to feel more relaxed. 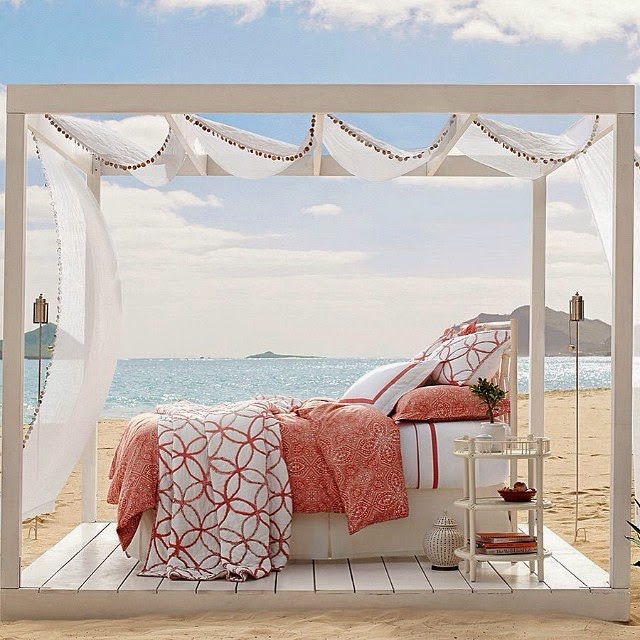 3. I like these pictures of Presidents Bush and Clinton sitting together at the NCAA men's basketball championship game on Monday night. These are two great men and I'm glad that they're buds. (At least until the presidential election of 2016--which I can't wait for--if Hillary and Jeb Bush run!) 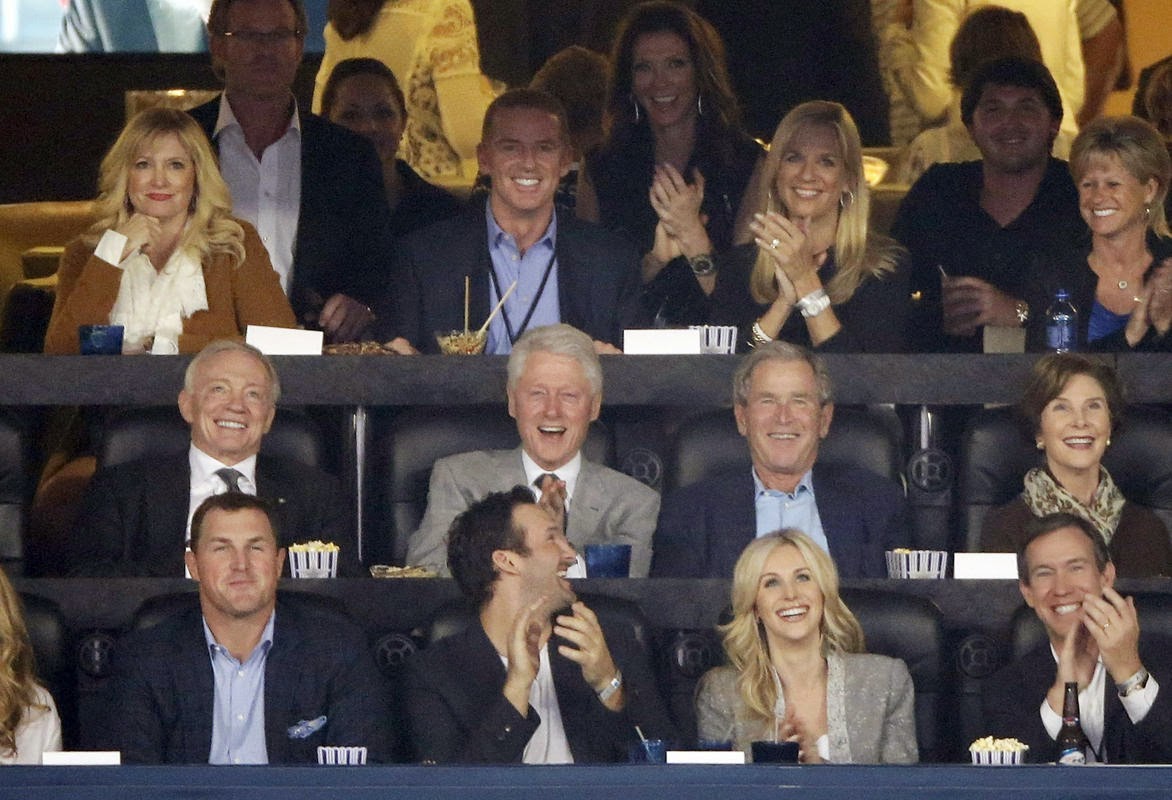 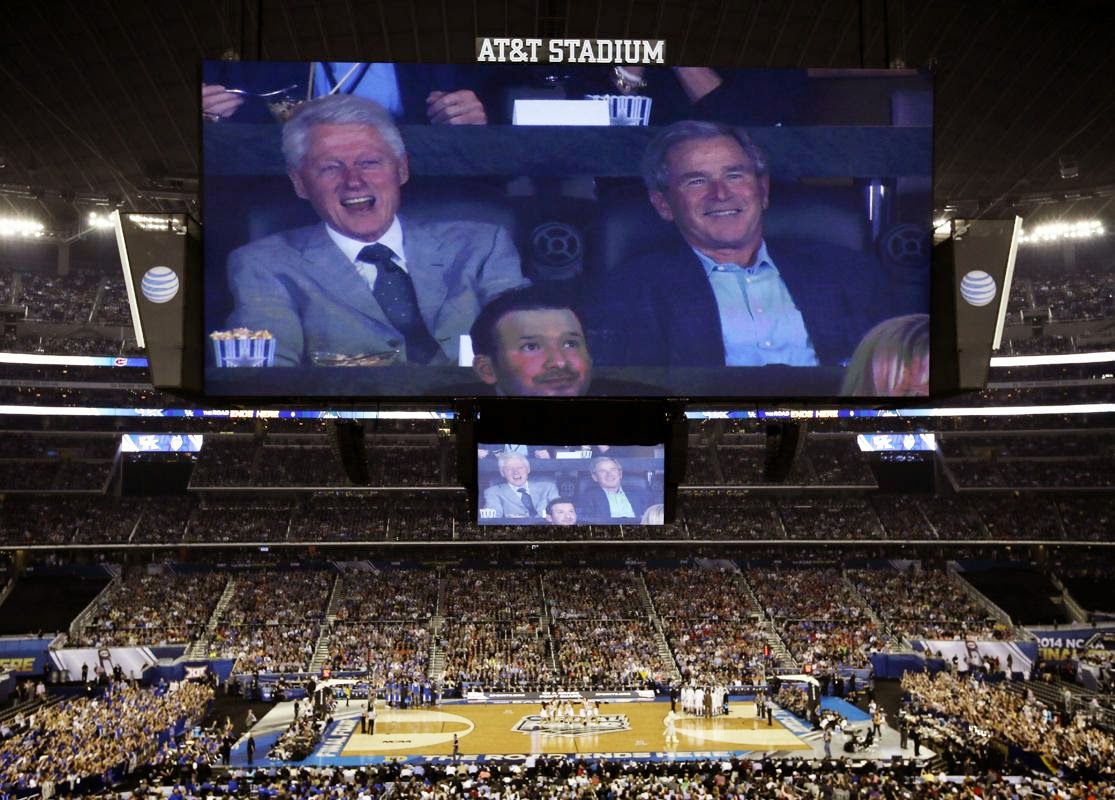 4. Now for some meaty stuff. I've been thinking lately about how I rarely write on my blog anymore about social issues/politics/controversial things/news events of note. I used to do that a lot more and I'm still very interested in all of those things, but now my focus on my blog is more on documenting me and my family's life and experiences, with a bit of fluff thrown in for fun (numbers 1 and 2 above are especially good examples of the fluff I can churn out). I don't have the time to blog anymore like I used to, so I write about the things that are most important to me that I most want to have on record for the future. If I truly feel passionate about something and feel like I need to share it on my blog, I will, but I usually don't have the time, the energy, or the inclination.

But that doesn't mean that I don't think about lots of things. If I had the time and the inclination, perhaps I'd write more extensively about issues like the following that have been on my mind lately:

-Ordain Women. I disagree with them, and like all movements that are destined to fail, I think they'll fade away with time. I don't say that to be flippant and dismissive because I know that this issue really matters to a small percentage of women in the Church, but that is truly how I feel about it.

-I think it's completely ridiculous and really sad that the new CEO of Mozilla (Firefox) stepped down because people found out he donated to Prop 8 in California a few years ago and made a huge uproar about it. They say he was being discriminatory (for a personal and religious belief in his private life that really has no bearing on his professional life), but don't they realize that they're being discriminatory by persecuting him for supporting traditional marriage, which he did quietly, respectfully, and privately? It's so hypocritical that it boggles the mind. In the name of supposed intolerance they're being intolerant themselves. Even some prominent gay-rights activists have said that what happened was wrong. This post from The Matt Walsh Blog is more heated than I am about this debacle but it has given me much food for thought on the matter.

-Well now that I've gotten warmed up, here I go. This is the issue that's bothered me the most this week. I was disappointed that Chili's canceled their fundraiser this past Monday for Autism Awareness Month. They were going to donate a percentage of participating diners' proceeds to the National Autism Association, but lots of people raised a big fuss about it on Chili's Facebook page because the NAA is sympathetic to people who believe that vaccines may have hurt their children. So Chili's canceled the fundraiser and the NAA didn't get anything from them to help families who are affected by autism. I think that's really sad.

I know vaccines are good, and of course I believe in them, but guess what?

There are people out there, myself included, who have had experiences with vaccines that make us suspicious of and cautious about our children's vaccinations. I believe that they can cause harm to {some} children and people; not many, but some who are more sensitive to what's in the vaccines than most people are. Whenever I see a pro-vaccination article shared on Facebook or some other place that bashes people who are cautious about/wary of/suspicious of vaccines, I feel a little sad and defensive, because I know from personal experience that some parents have good reason to think twice about how their kids get vaccinated. And that is not based on the discredited 1998 study that they're always saying we base our beliefs on. My caution comes not from misinformation or ignorance but from experience and research. I feel that the vaccination schedule for all kids is stacked heavily with too many vaccines at once for their little developing systems, and that some kids are very sensitive to this with tragic life-changing effects, and that for safety's sake the vaccines should be spaced out more than they are.

I rarely see anyone stand up for those of us who choose to think twice about vaccines. Many of us have a good reason for feeling the way that we do. It doesn't mean we're right...but we very well could be.
(Just a note: my children are fully vaccinated and so am I, but we skip things like flu shots, and I spaced many of their vaccinations out, especially when they were younger.)

Whew! I hope I haven't alienated too many of you after all that. And you thought you were going to get a totally fun, lighthearted Five Things for Friday, didn't you? :-) It did feel good to get that out. Maybe I should opine more often?

5. Next week I'm taking an unexpected trip to New York City with John and Sam to see my sister get married in Central Park! It's unexpected because my sister and her fiance are eloping but they recently decided to ask close family to be there. I am so happy to be going back to one of my favorite places for such a happy event. 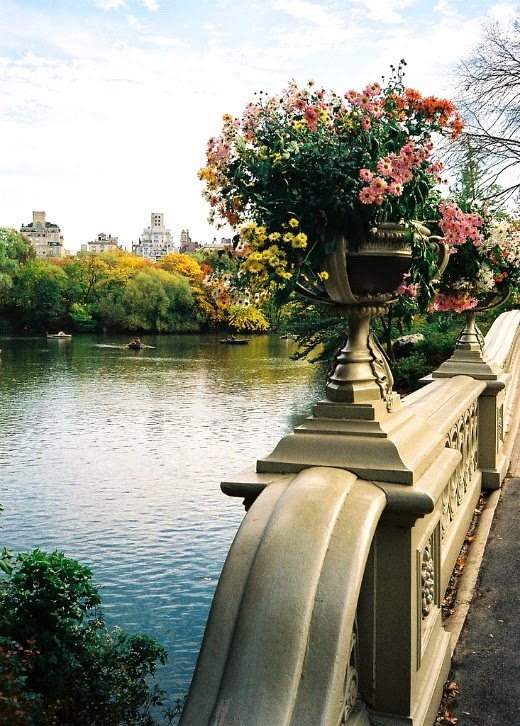 It's been nine years since I've been to New York. The last time I was there was when I was pregnant with John. I knew the city quite well when we lived in New Jersey because I went in once or twice a week for classes I was taking at NYU and for job interviews and going to the temple and things like that. Peter and I had some great date nights in Manhattan. One night when we were in Times Square on our way back to Penn Station after dinner, he changed the color and moving graphics of the Prudential sign at the top of Times Square for me. He had the special codes to do it by phone because he worked for Prudential. I was so impressed and it's one of my favorite memories of the city. See the sign down below? 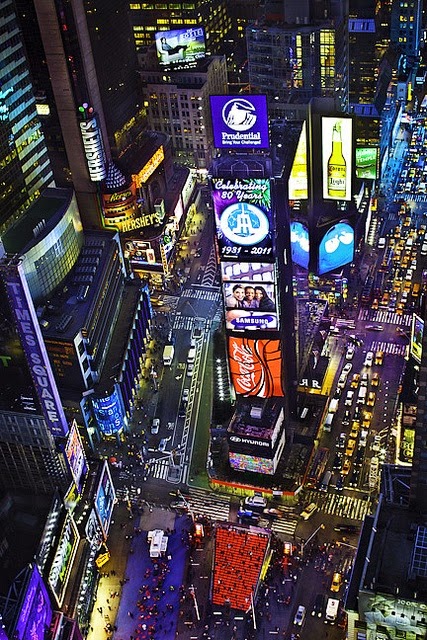 I got to know Manhattan well, especially Midtown, and after awhile I stopped walking everywhere or taking a taxi and became good at using the subway. I knew I'd made it when people started asking me for directions on how to get places. Now it's nine years later, and I don't remember how to use the subway that well (I definitely don't remember all the different subway lines!), and while I do remember the layout of Midtown pretty well and where things are, my city smarts aren't quite as sharp as they once were.
It will be humbling to be back as a tourist! And it will be so much fun!
We aren't going to be there for very long and we'll spend most of our time on wedding festivities, so there won't be a lot of time to go out and do things, but that's okay with me. It will be great to be back.

Ahhh, this picture brings back happy memories of a very happy time in my life! 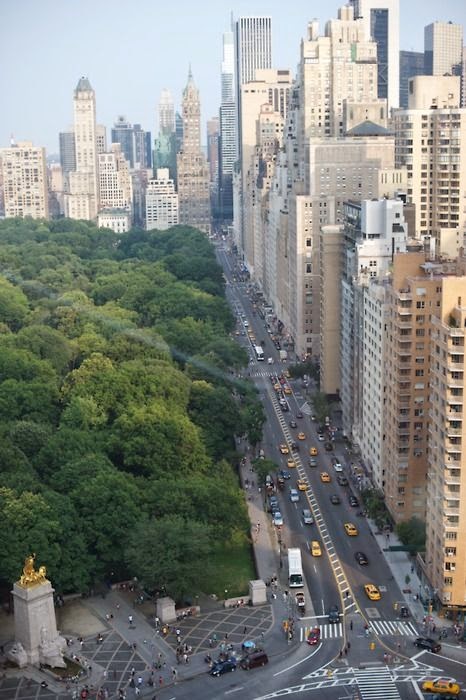 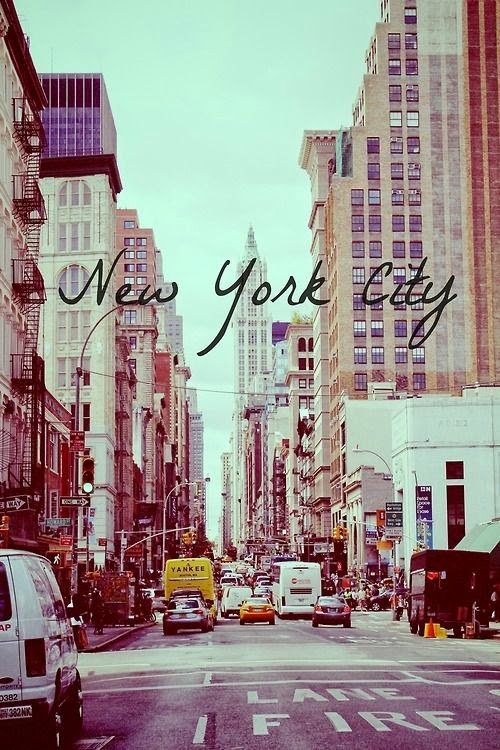 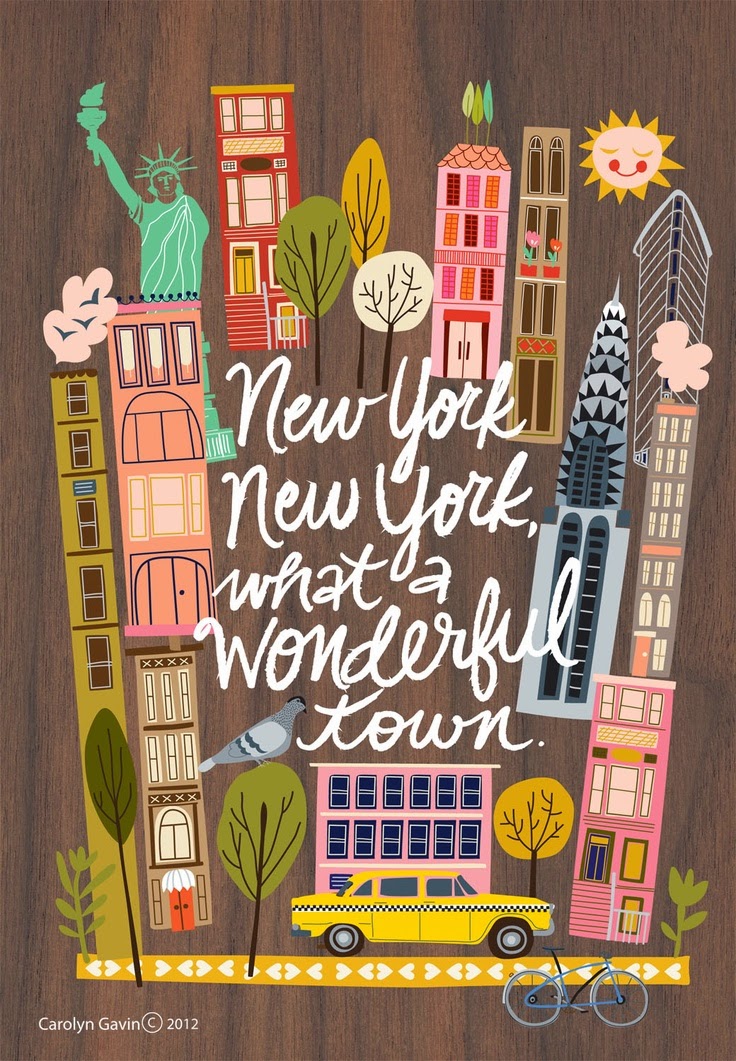 Okay. I'll stop now. I got all of the above images from my "I Love Manhattan!" board on Pinterest. LOL!
I have a dream to live and work in Manhattan, someday, somehow!
But until that happens, I'll just have to enjoy taking occasional trips there about every 9-10 years. :-)