Boys at the Beach: Winter Edition 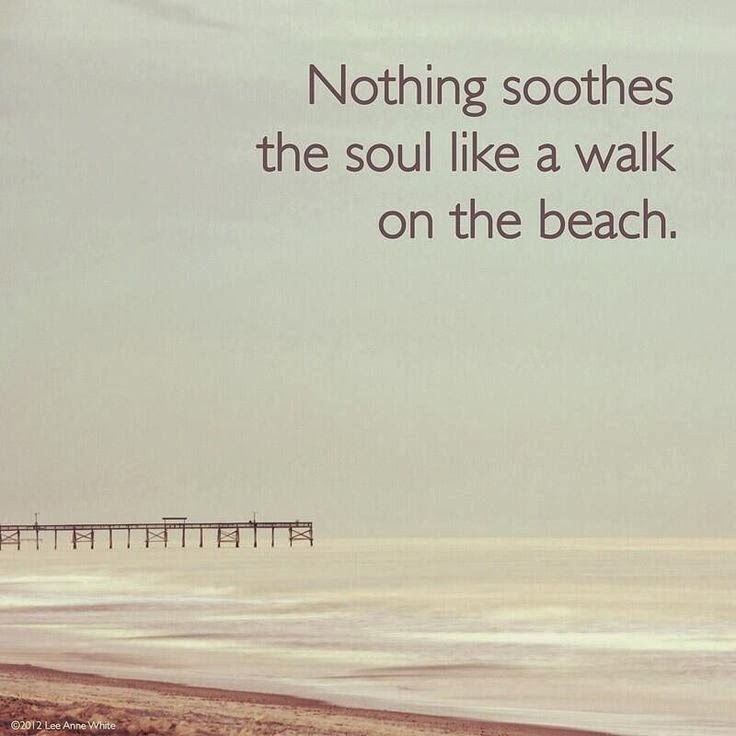 When we stayed at our house on Cape Cod for the first time the week after Christmas, I had a special experience in which I saw firsthand the calming power that the ocean can have on a person.

Peter, Sam, and I arrived at the house after driving there from Peter's parents house in Rhode Island, where we'd spent the afternoon for a family Christmas get-together. His parents brought John the next day because he had wanted to sleep over at their house the night before. When John got to the house, he was upset and didn't want to come in or talk to anyone. He refused to talk about it, so nobody knew what was bothering him. After a little while when he still hadn't come inside, I asked him if he wanted to take a walk with Sam and I to the beach. He grudgingly agreed. As we walked and took in the fresh ocean air and caught glimpses of the water, he softened and started to become more talkative. 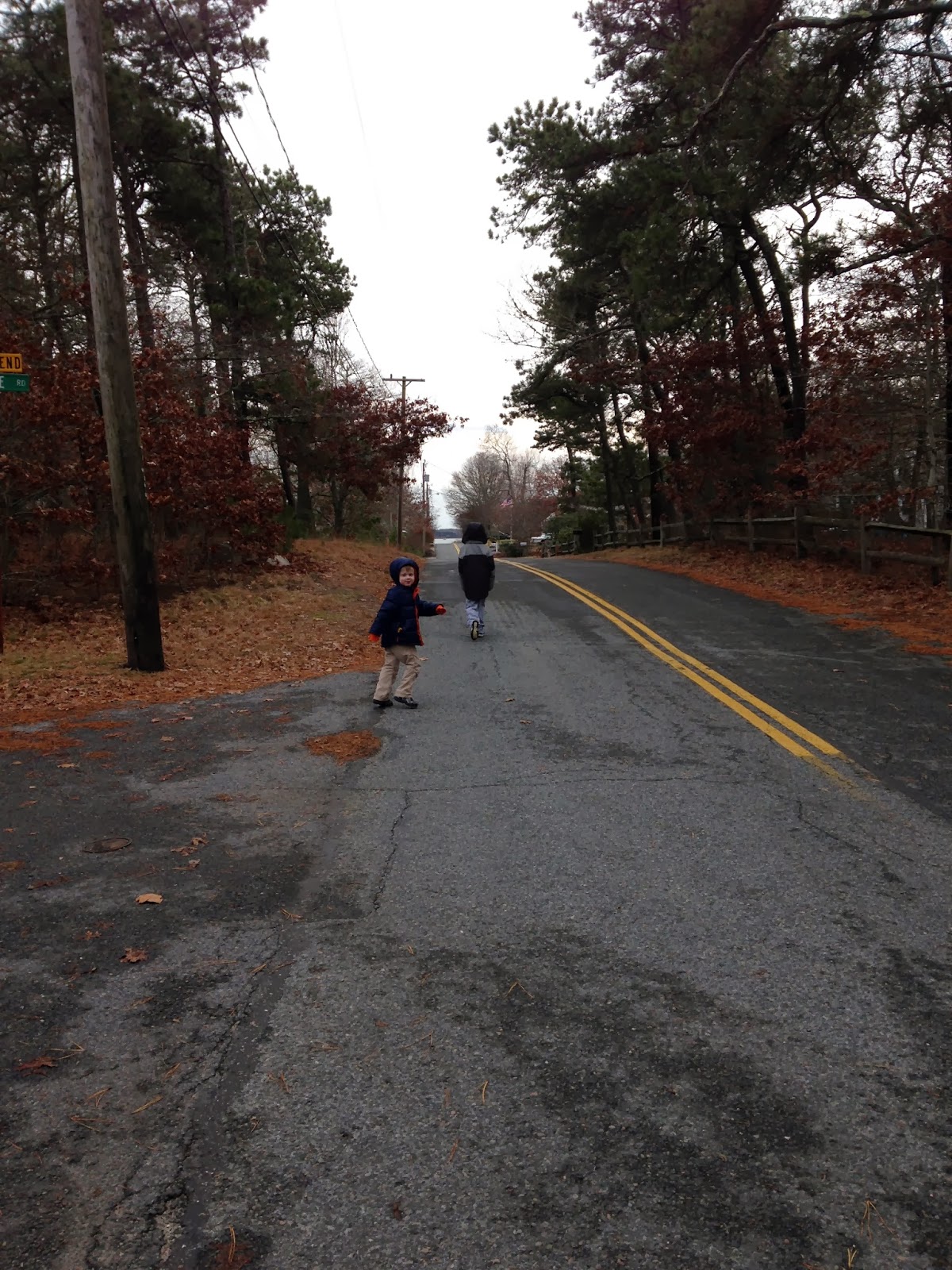 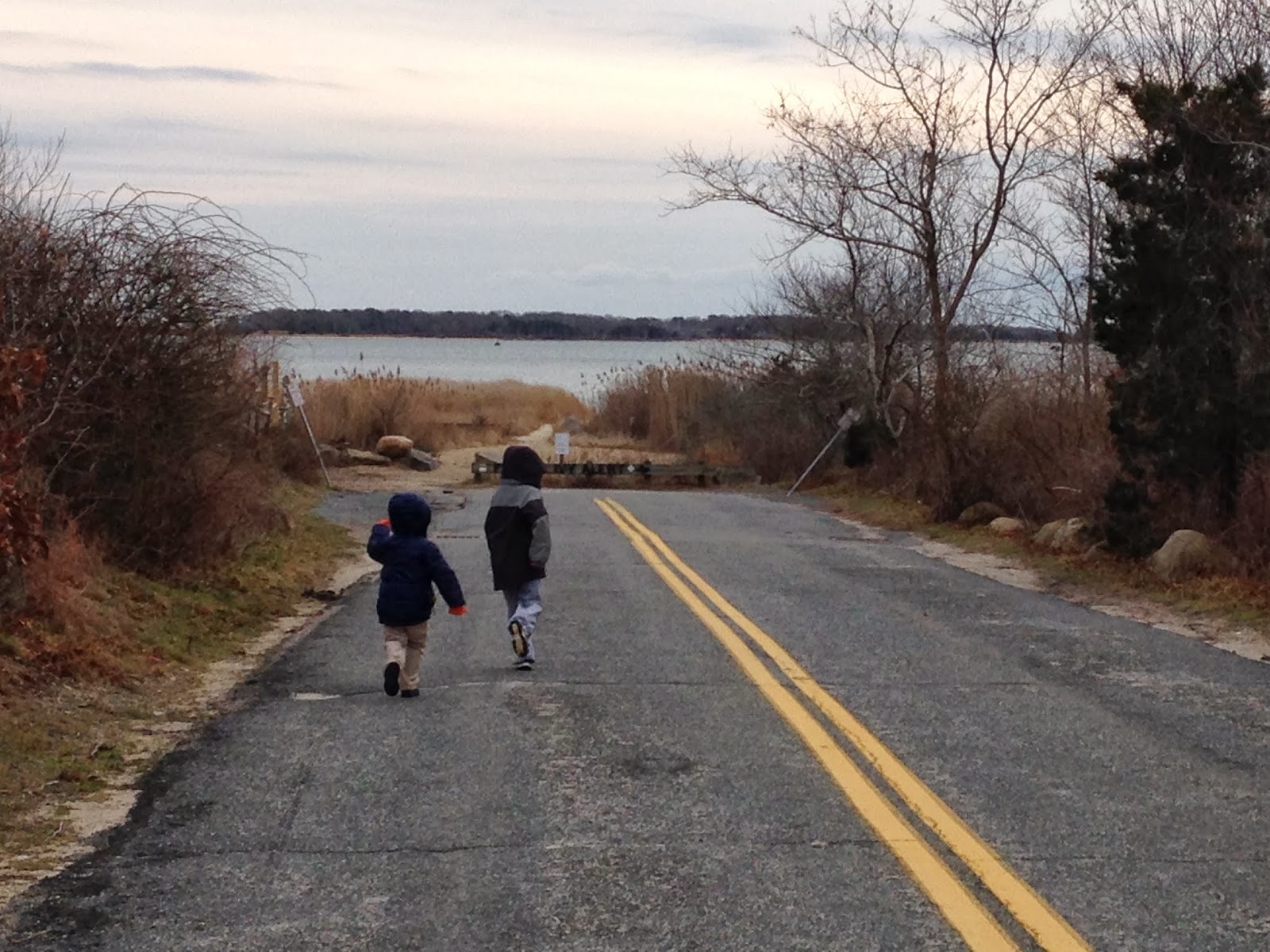 By the time we got to the beach and after we'd spent a few minutes there, he had let me know what was upsetting him, and I was able to comfort him well enough that he was back to himself again and didn't bring the matter up again. He was at peace with it. 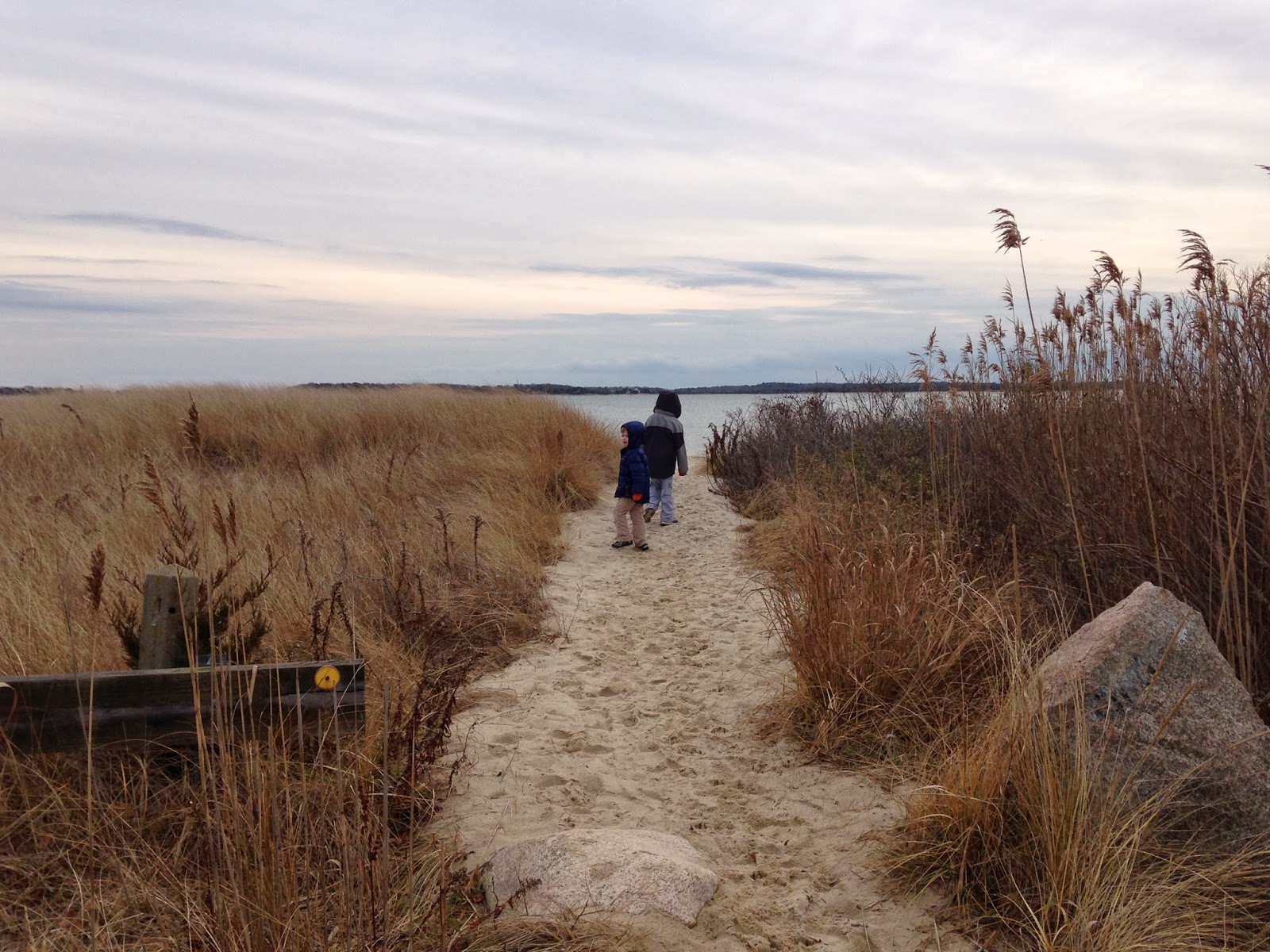 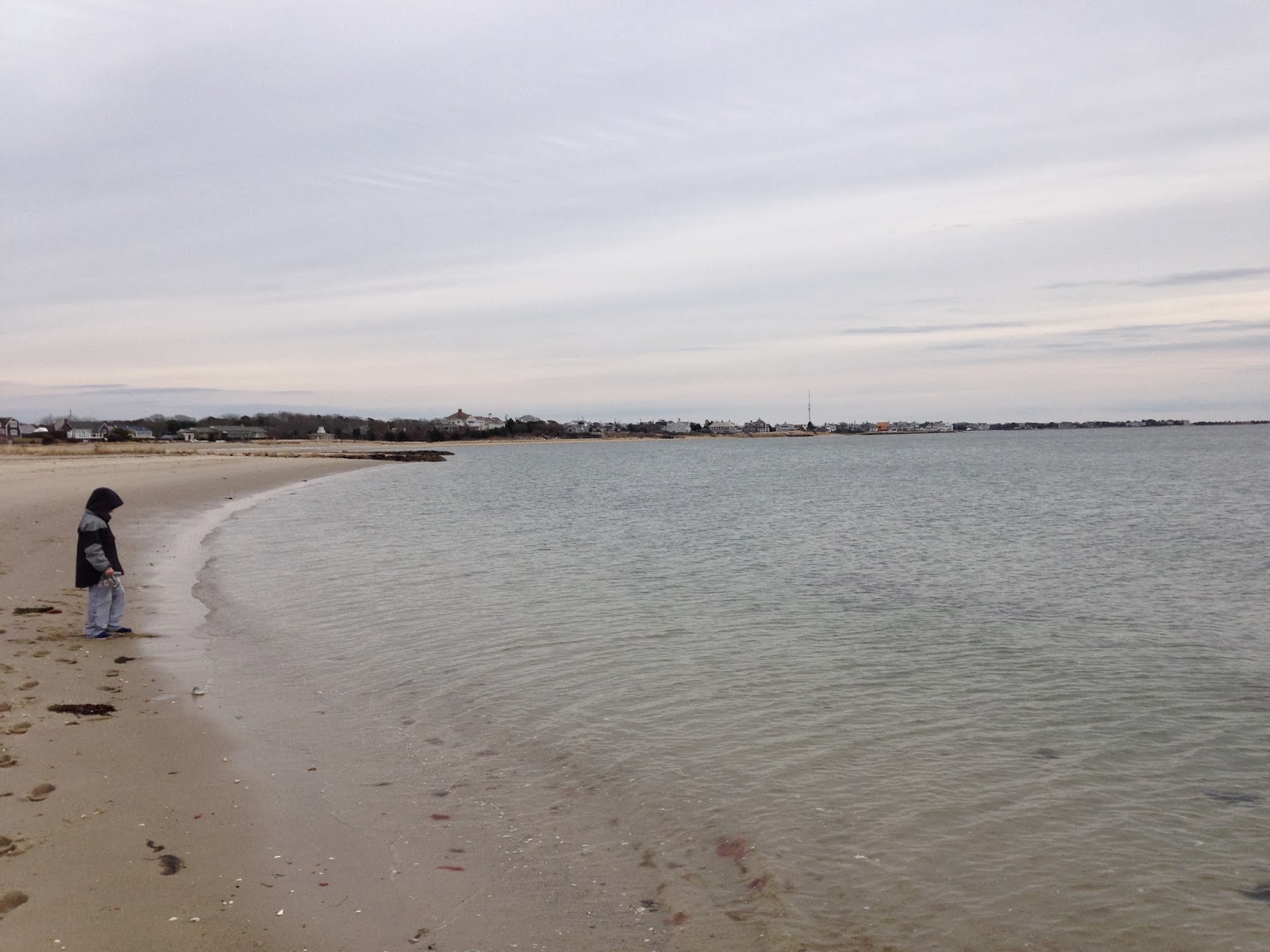 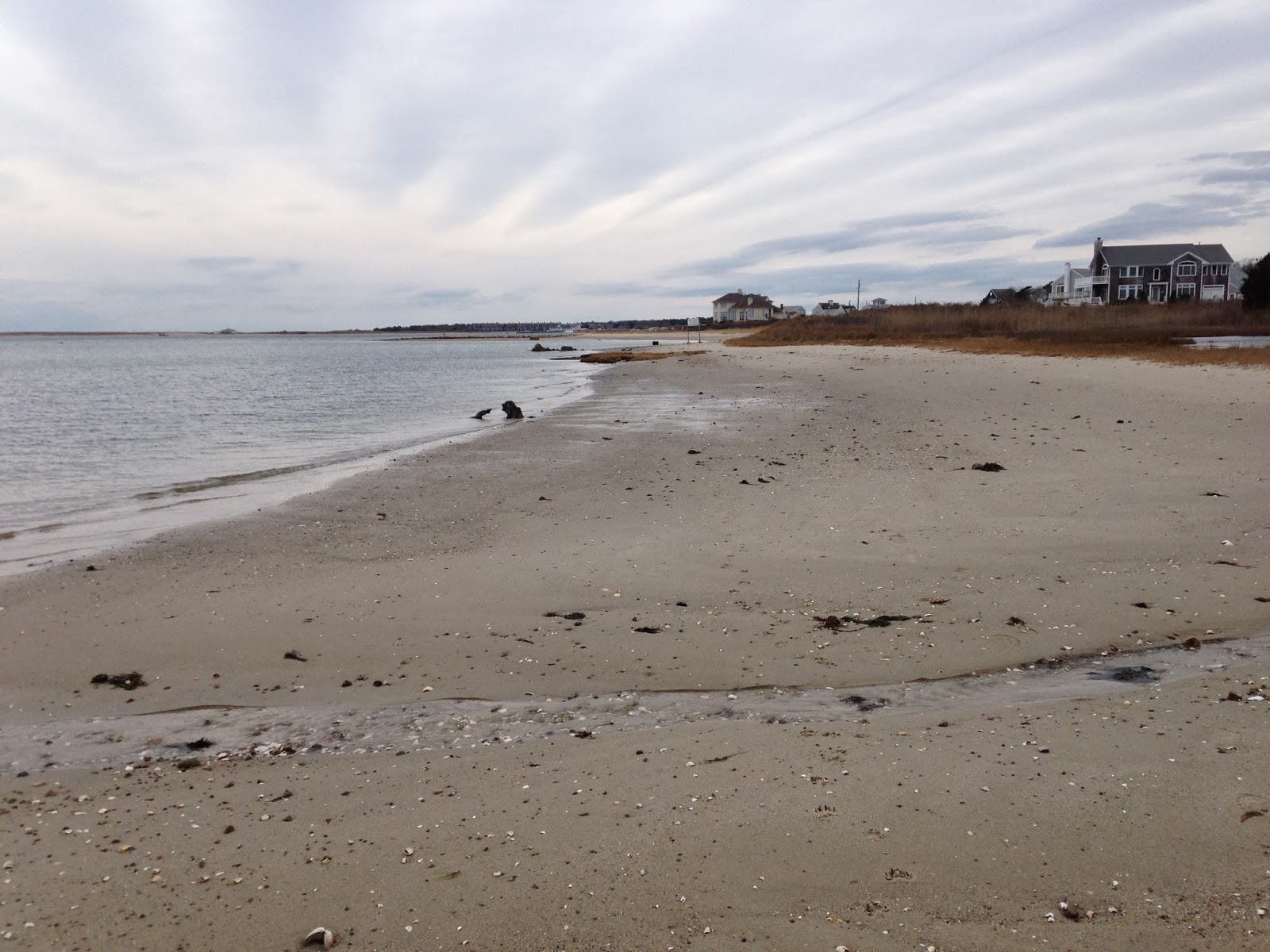 The sky and the sea were so pretty and calm. I hadn't been to the beach at this time of the year before. It had an unexpected quiet peacefulness to it in winter. 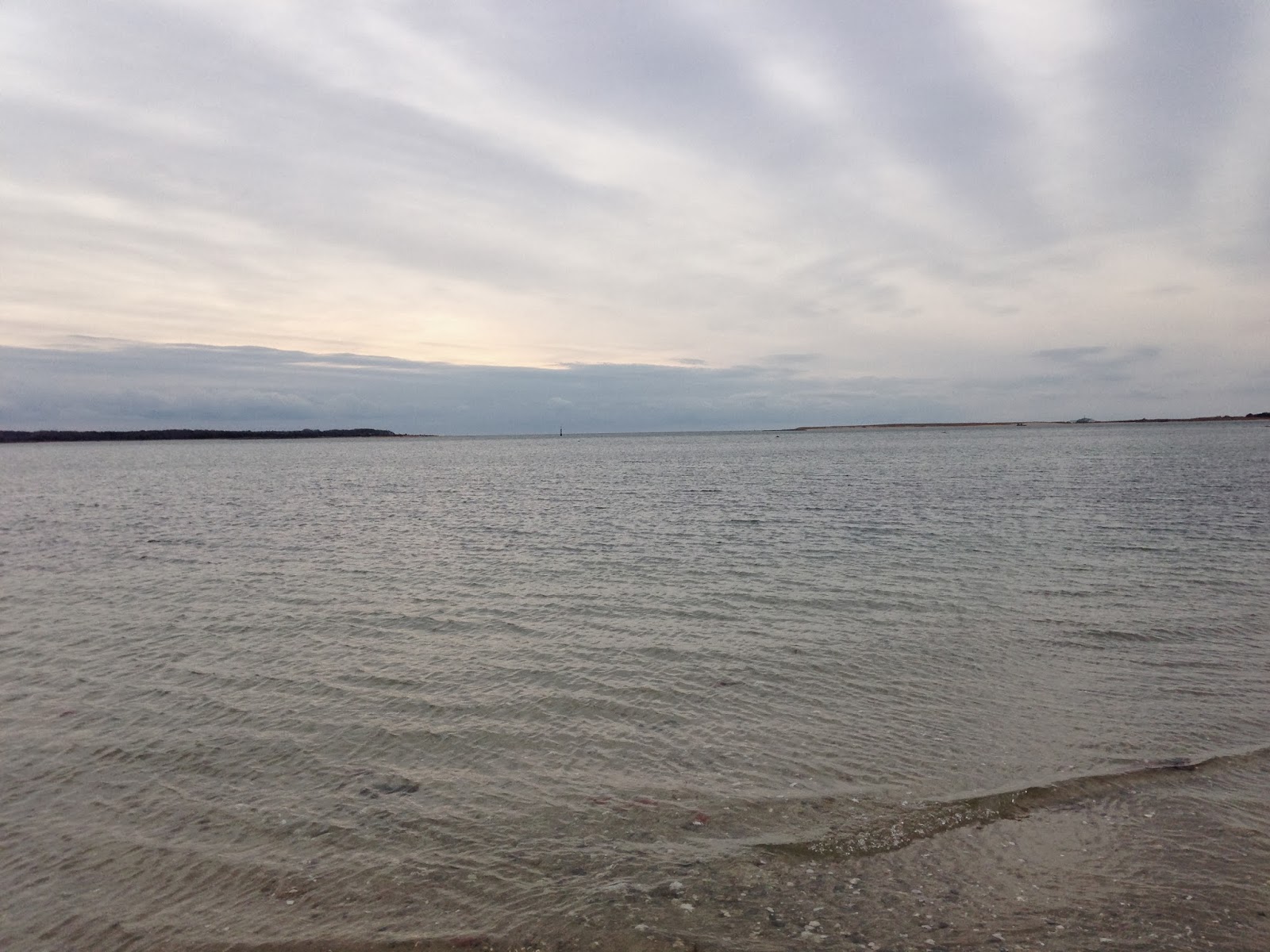 John was just fine after that, and by the time we left the beach to walk home he was totally himself again. To me, this was strong evidence of the power of being out in nature, in this case at the ocean's edge, and how it can help calm and comfort a troubled soul.

(Sam enjoyed our outing too.) 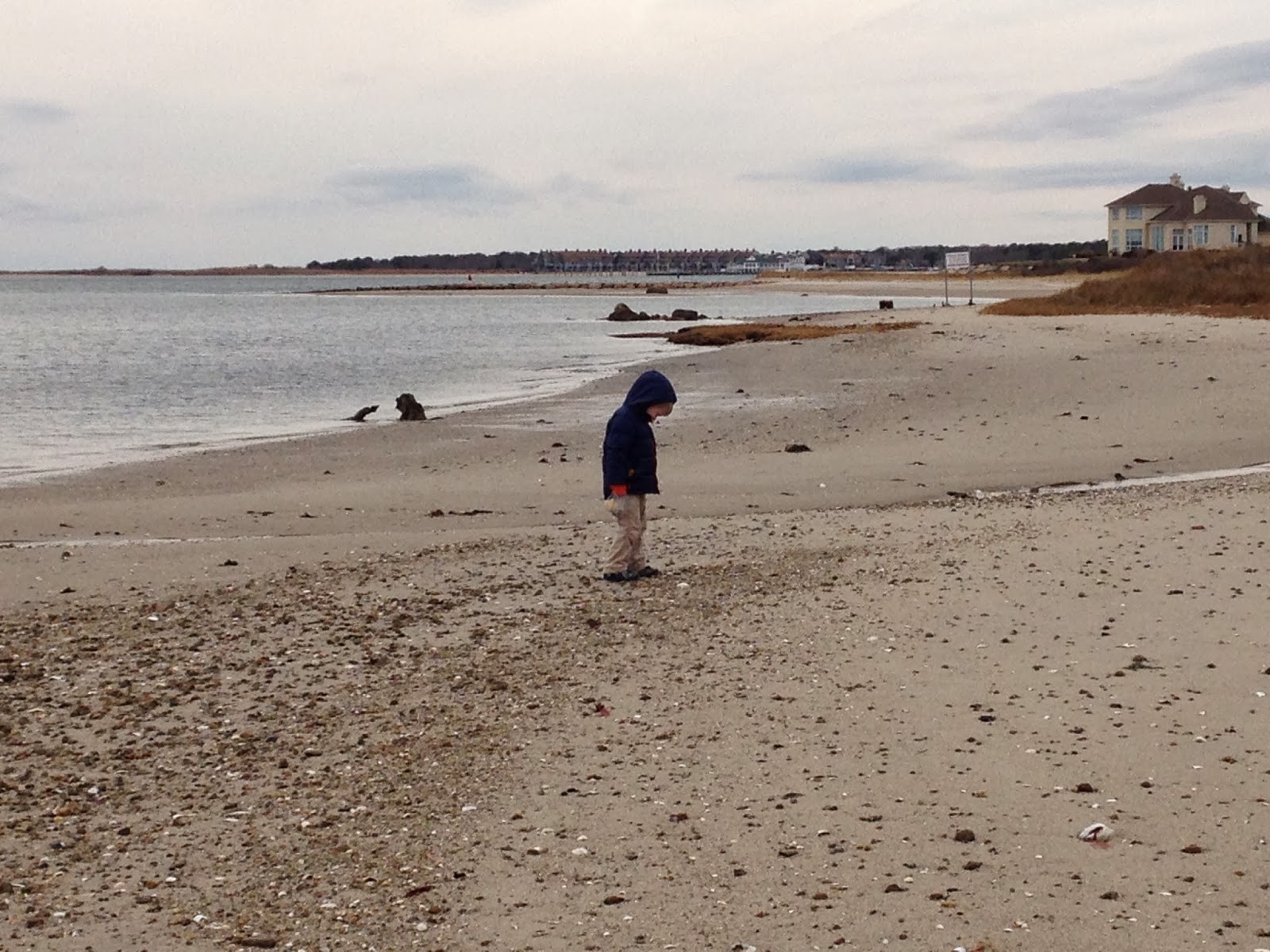 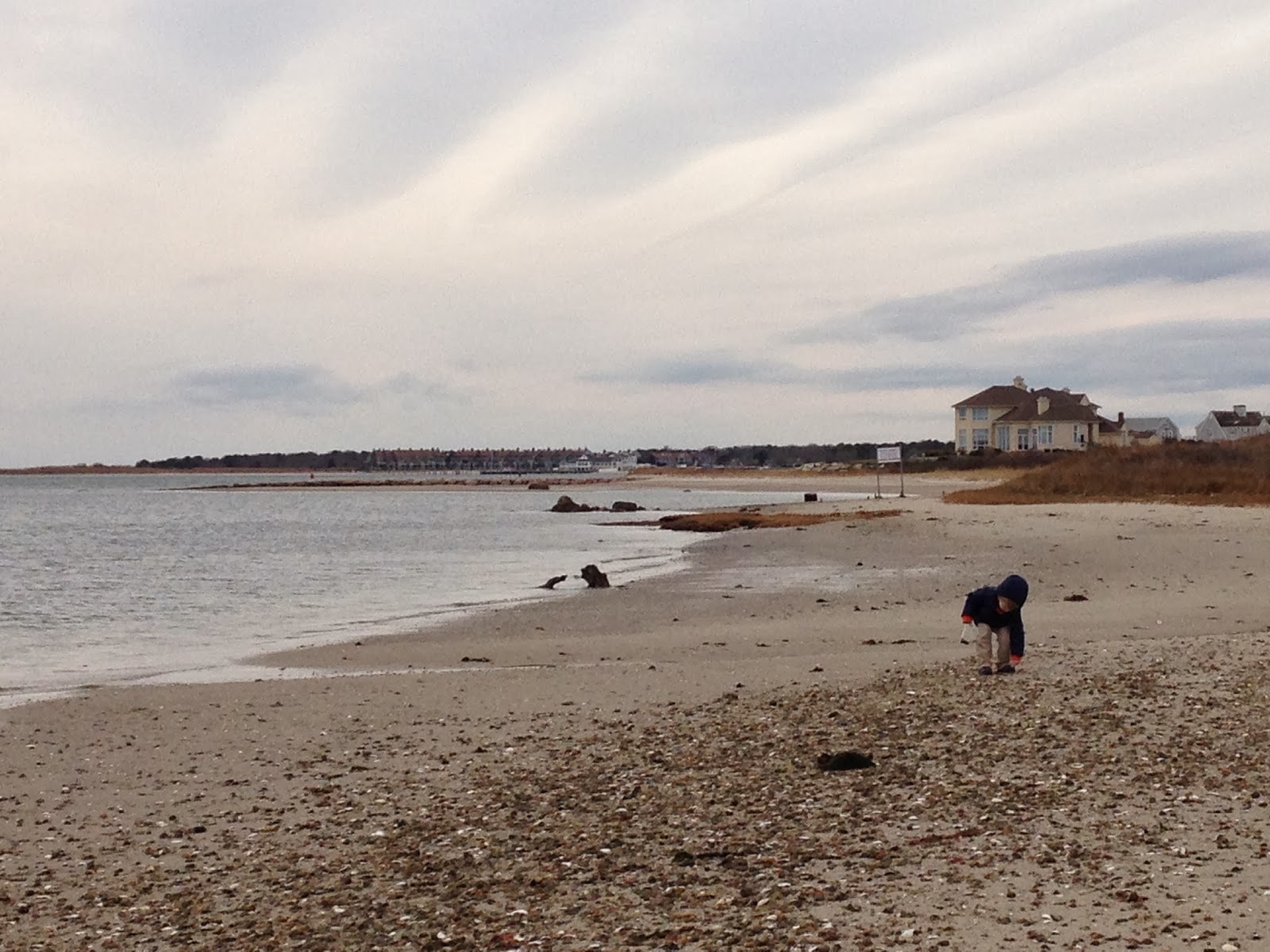 The boys had fun collecting seashells. This is a bay beach and it has a terrific, huge assortment of shells. 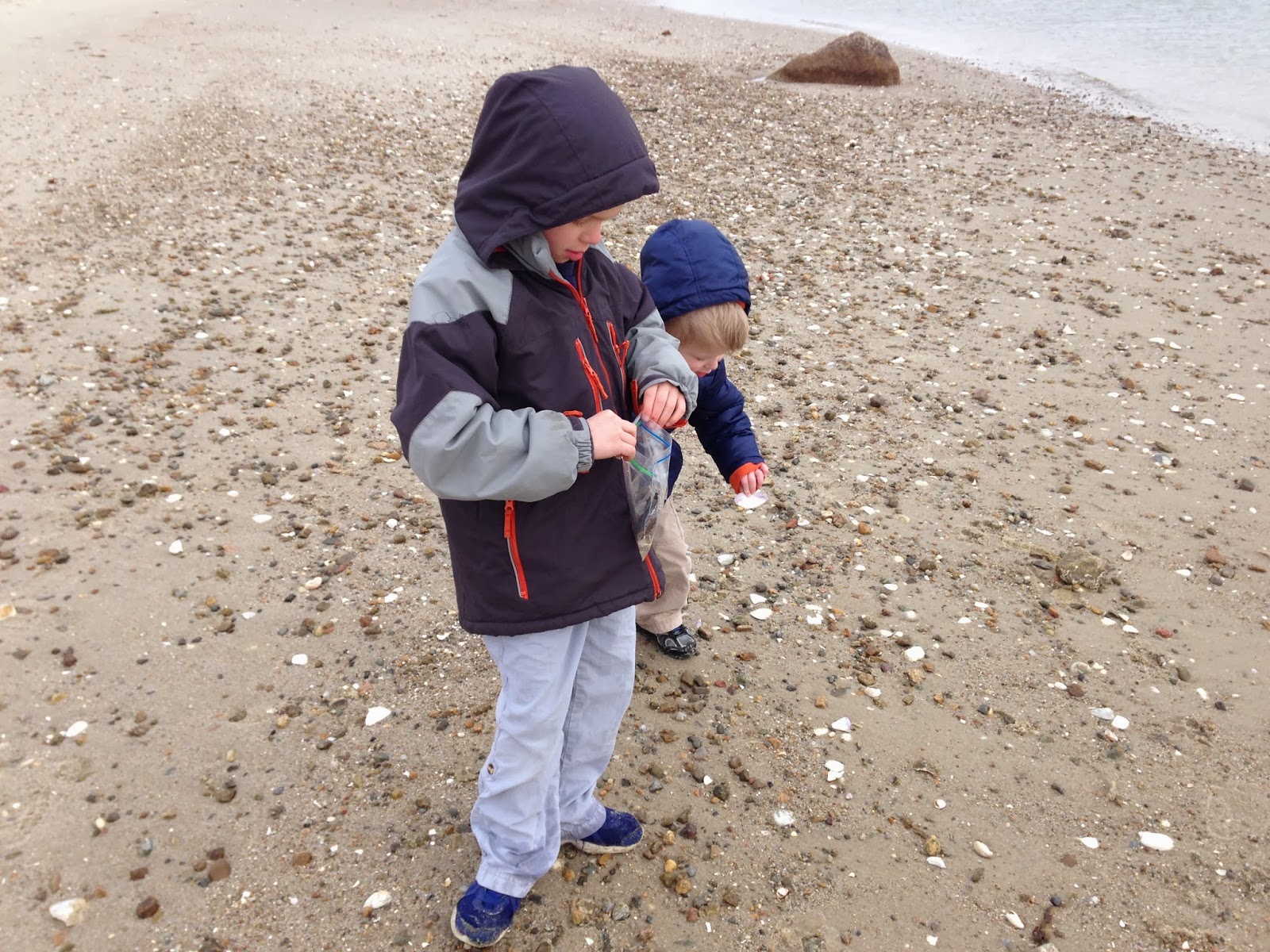 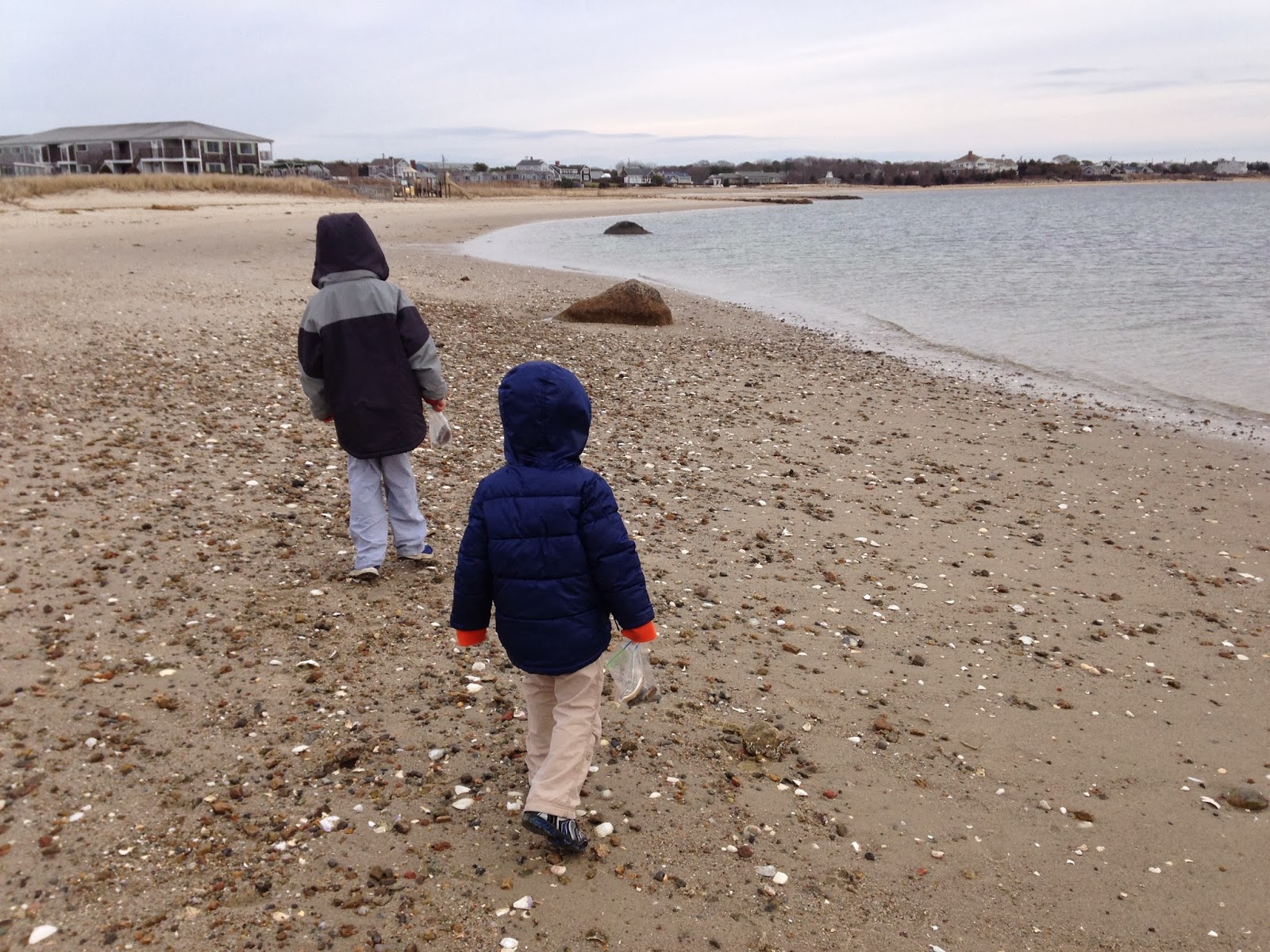 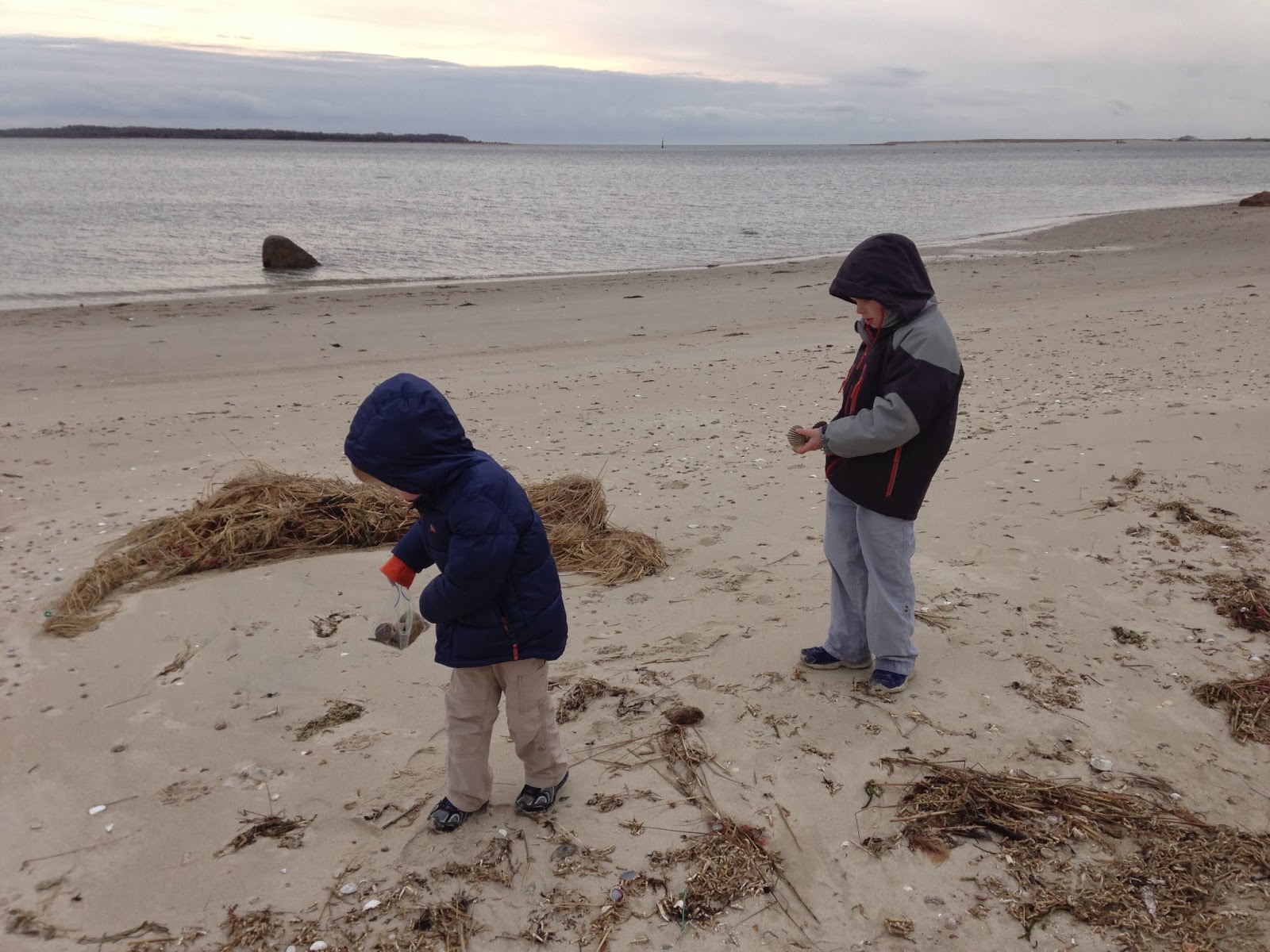 (If you're wondering what he was upset about, it wasn't anything too serious, but it was enough to make his 8-year-old heart sad. He was very disappointed that we didn't get another house that had been at the top of our list. He really liked that house, and for good reason: it was spacious and lovely; it was right near the lake beach we love in the neighborhood we've rented in for several years; it had a large private fenced-in backyard with a pool and swing; and speaking of pools, it had a big pool table in the basement. This house was at the top of my list as well, until we found the house that we ended up buying. The problem with the other house was that it was too big--it was more for a family who was going to live in it full-time, not for summer folks like us. It would probably have cost a small fortune to furnish it. From a renter's and parent's perspective, the backyard pool was not only problematic but unnecessary with a freshwater lake nearby, not to mention the ocean beach only two miles away. And it was at the very top of our price range. The house we ended up getting was a much better fit for us in so many ways. John felt a lot better about it after our trip to the beach that day and after he'd stayed in the house and saw that even though it didn't have a pool or a pool table, it wasn't so bad. After all, it did have a big ping-pong table and a super-cool secret hideout room!) 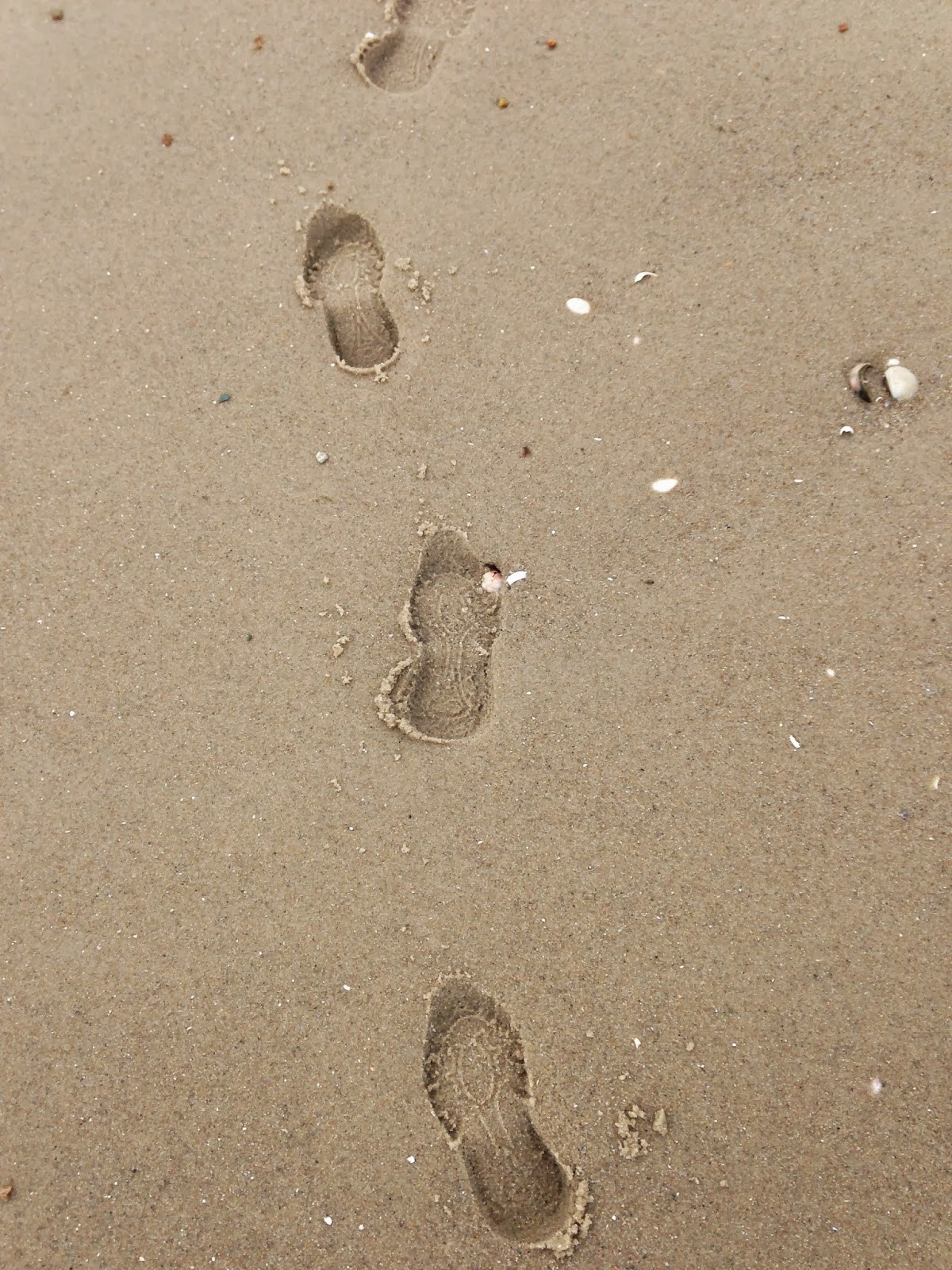