Getting Home: Adventures in Traveling (Part 3)

Before I conclude writing about our adventure in traveling, I want to post some pictures of our little home away from home: our hotel room in Washington, D.C. Technically, it wasn't in D.C. It was in Arlington, Virginia. We stayed at the Marriott Residence Inn Pentagon City. We're Marriott fans and we've enjoyed having Platinum Status there as a result of Peter's business travels. Unfortunately our status is now expired and we will miss it until we earn it back again! 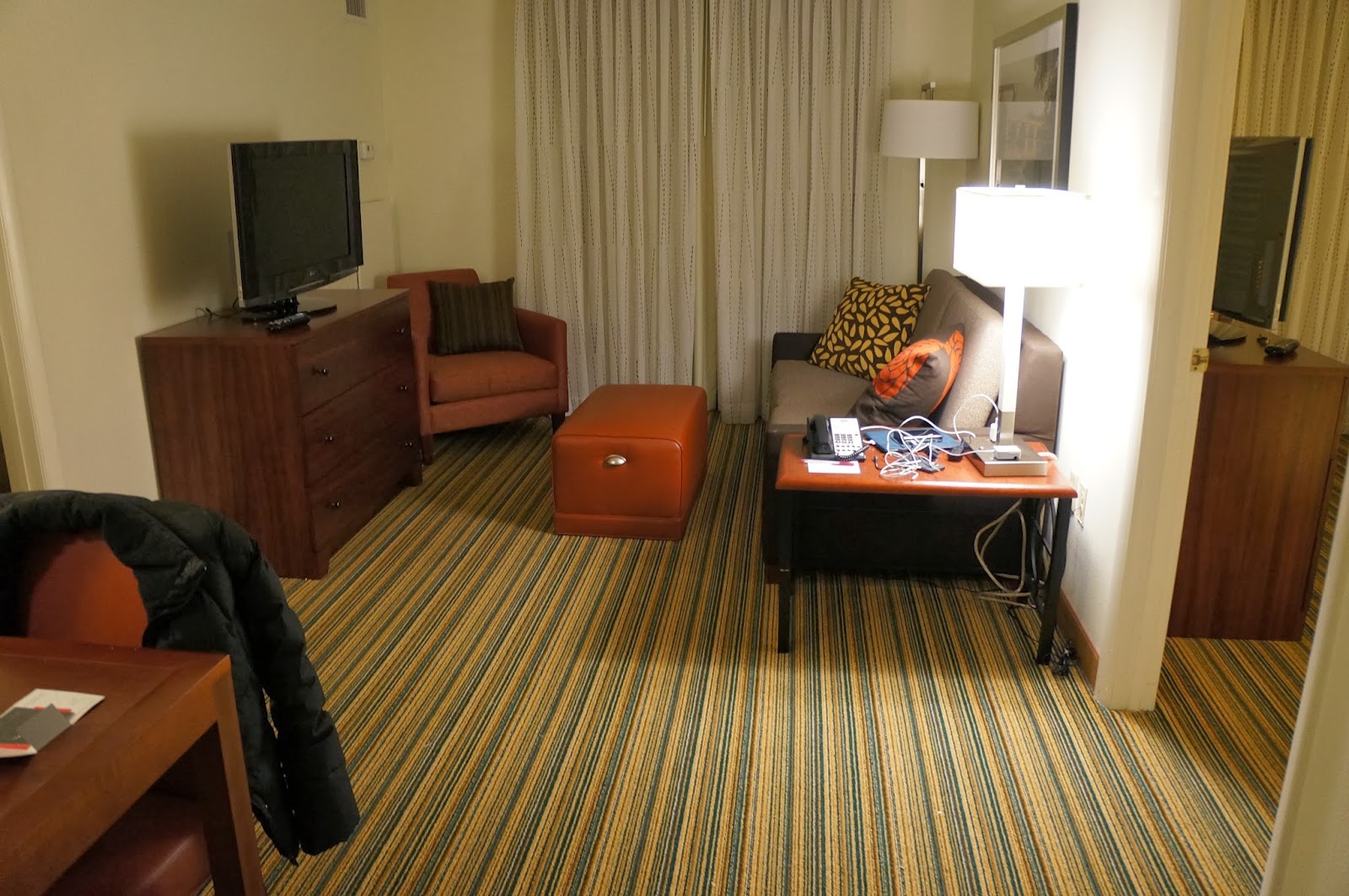 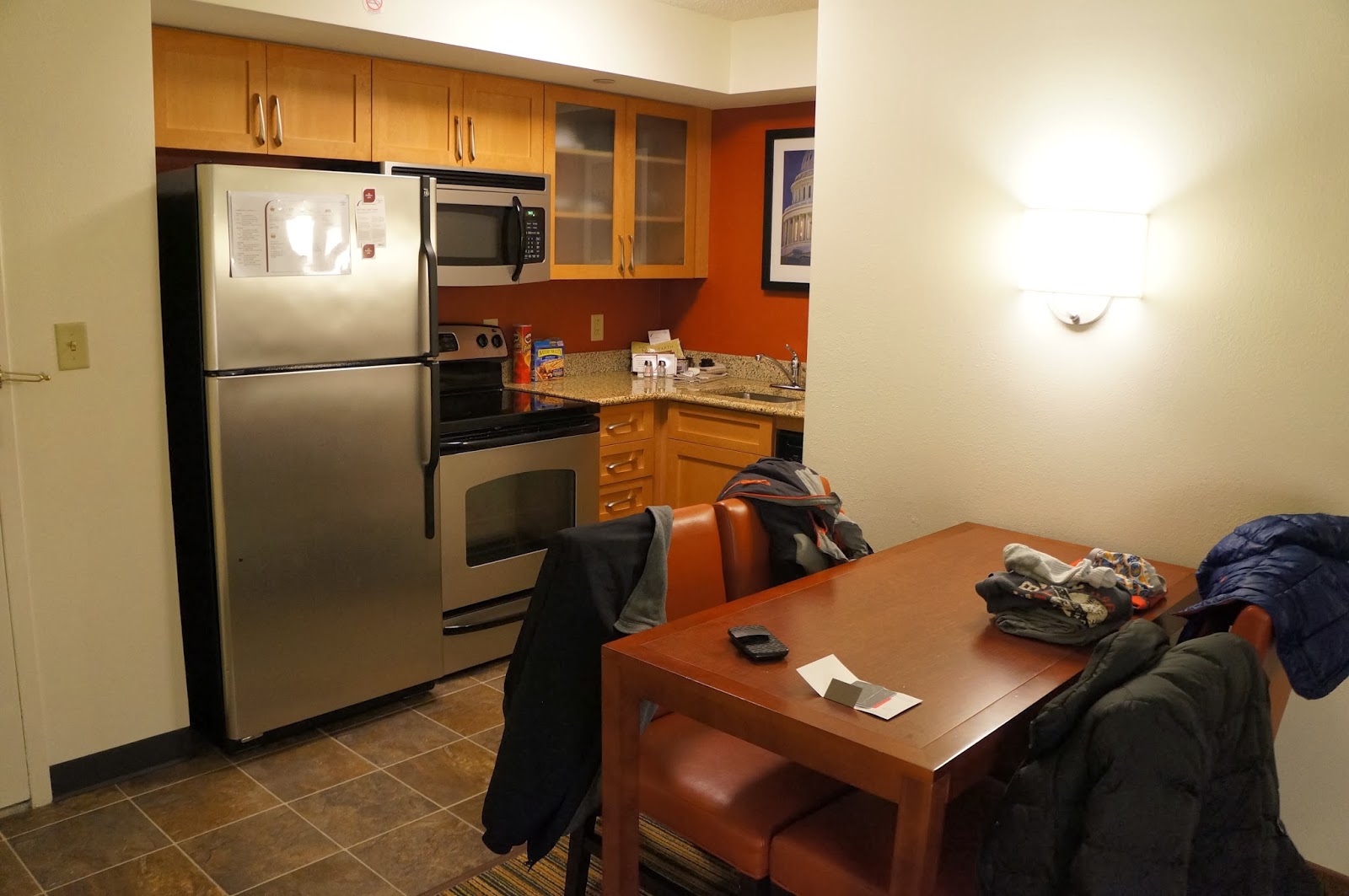 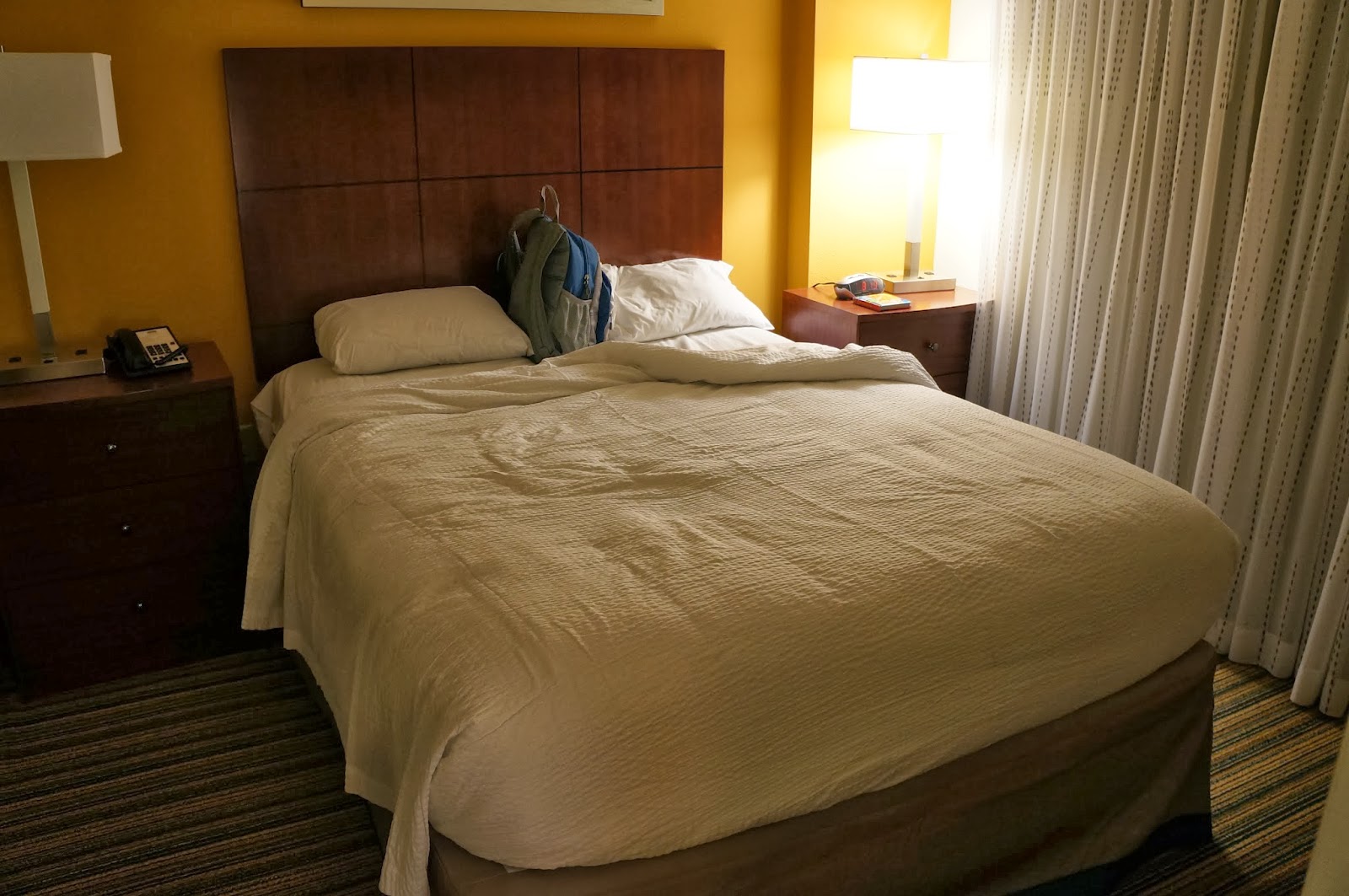 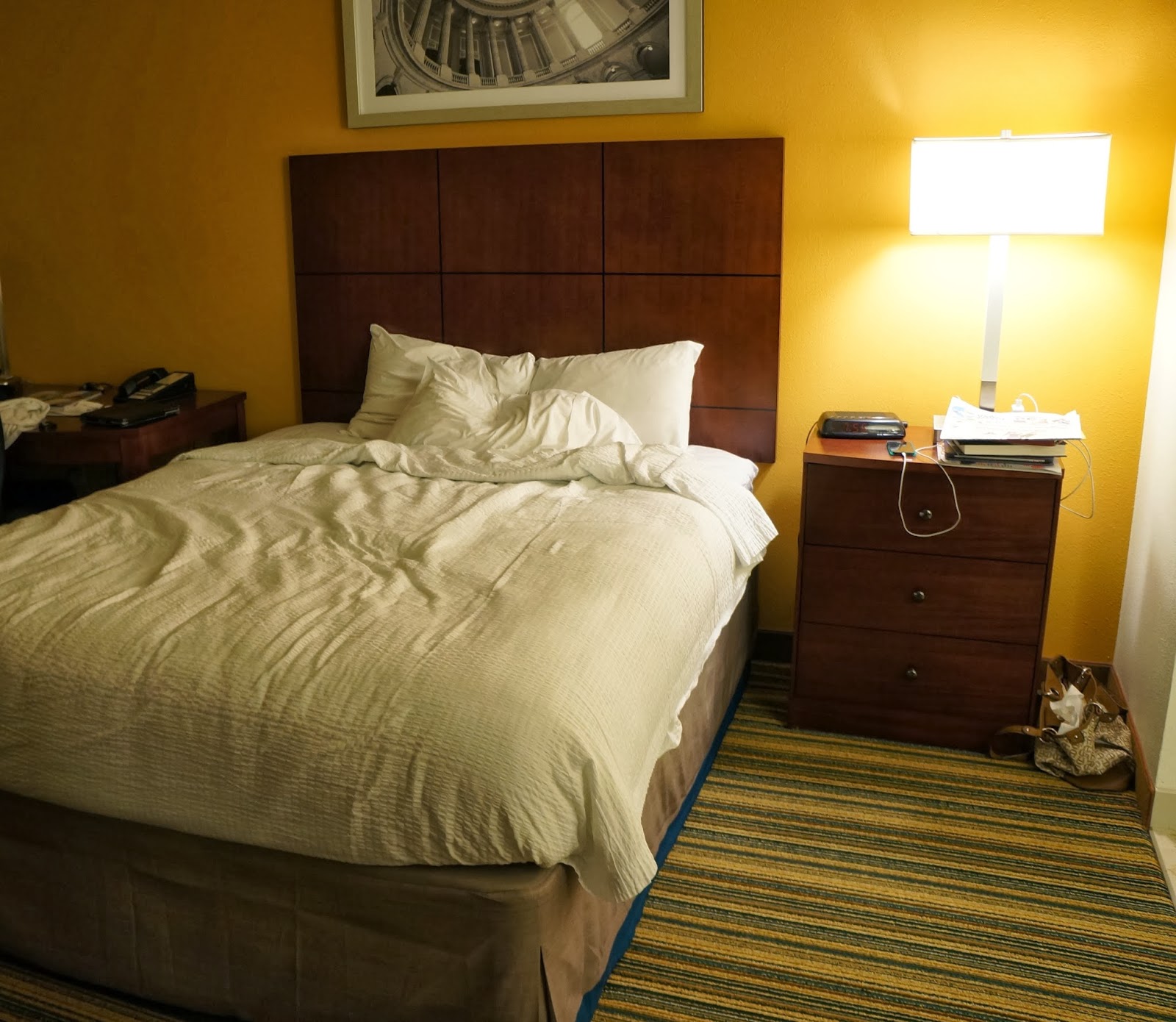 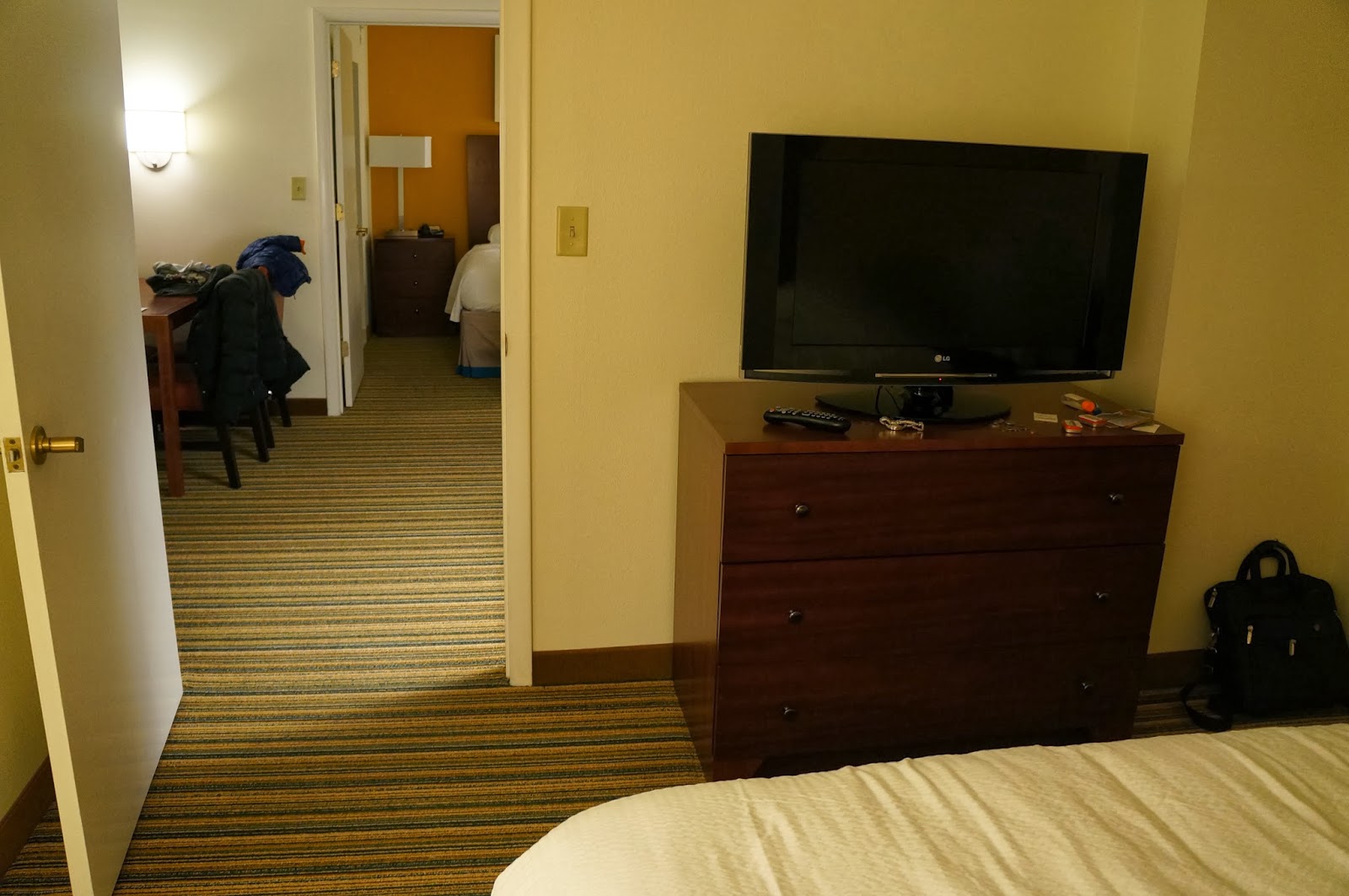 Each bedroom had its own bathroom. Nice! 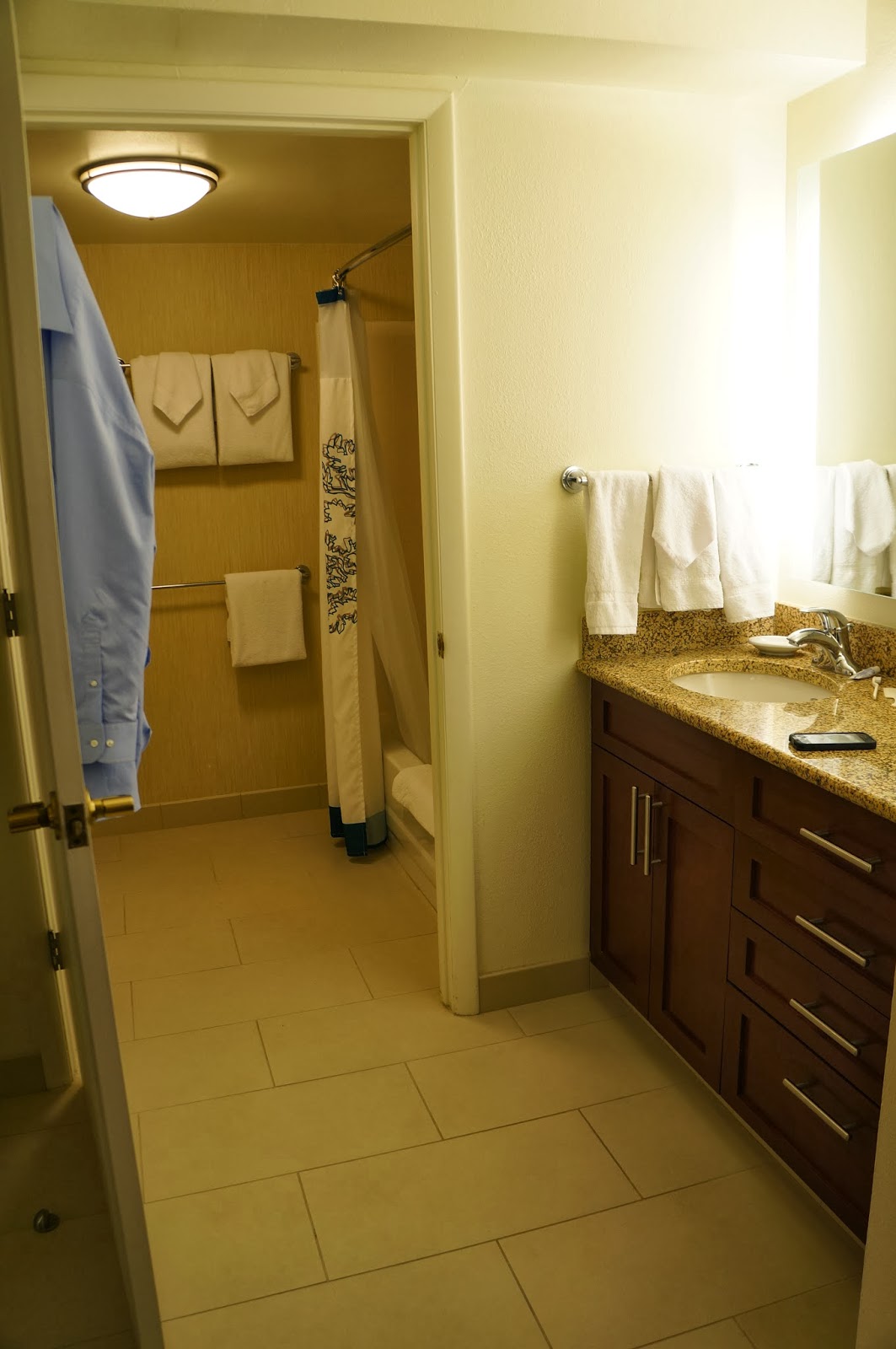 As pleasant of a room as it was, we were eager to leave it. As I mentioned at the end of my previous post, on Sunday night when we checked the status of our Monday morning flight to Chicago, it was cancelled. Peter spent awhile on the phone trying to get through to United (which is now our least-favorite airline, validated by an article in The Wall Street Journal a few weeks ago that ranked it low, like in ninth place, among the airlines). He finally got through to someone and they said they couldn't get us on a flight to Chicago or anywhere else near it until Wednesday. That was not happening! His polite but firm assertiveness worked and we were able to get on an early-morning flight from Dulles, which was not as convenient as Reagan, but beggars can't be choosers, so of course we took it.

We got up super-early on Monday morning, drove 40 minutes to Dulles in our rental car, returned the car, and checked in for the flight. Even at that early hour, there were already long lines because so many people had been stranded or delayed over the weekend. We were a little apprehensive because we kept getting alerts that our flight status was changing, or the gate was different, or whatever, and then it wasn't even listed on the Departures board at the airport when we got there. But it turned out that it hadn't been cancelled and despite not having assigned seats yet, we were confirmed for the flight. Hallelujah!

We were very lucky because the polar vortex had arrived in Chicago and was quickly making its way East. O'Hare cancelled 1500 flights in and out that day because of the freezing weather, adding to the huge back-up from the storm the day before. Our flight was one of the relatively few that was going to make it in. It was a huge plane and there was definitely room for us, but I was getting nervous as everyone was boarding and we were almost the only people left because they still hadn't assigned seats for us. I had become hardened to the realities of air travel in winter and wouldn't fully believe we were getting on the flight until we were actually on the plane. I think I literally breathed a huge sigh of relief once we got our seat assignments and made our way onto the plane.

Not a great picture, but it is great, because this was our sweet ride home--finally! 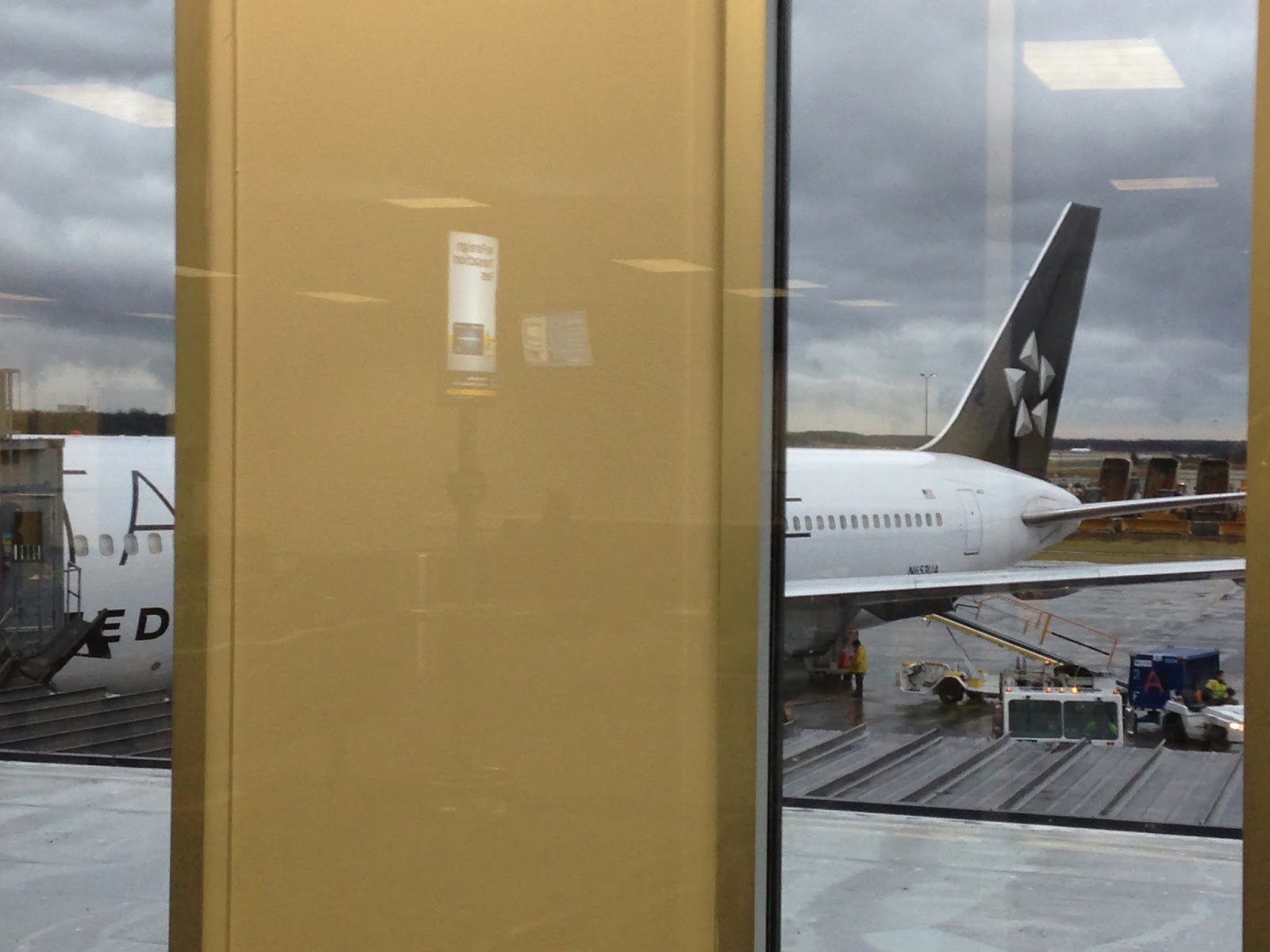 After that, it was pretty smooth sailing. I mean, flying. Ha ha. The plane took off on time, the flight was good, and we landed fine at O'Hare, although because of the extreme cold, one of the wheels on the gangway thing that connects the plane to the airport was stuck, so that took a few minutes to get fixed. The next hurdle was going to be tracking down our luggage, but even that proved to be easy. It was indeed waiting there for us like they said it would be. I don't think I'd ever been so happy to see our suitcases as I was then! We caught the hotel shuttle to where our car was parked, loaded it up in the bitter cold (no dead batteries this time, which is what happened to us the last two times we took a week-long trip in winter), and we were off on the four-hour drive home to Iowa. It was so good to be back in our car again, driving home! Even if it did look like this during the ride... 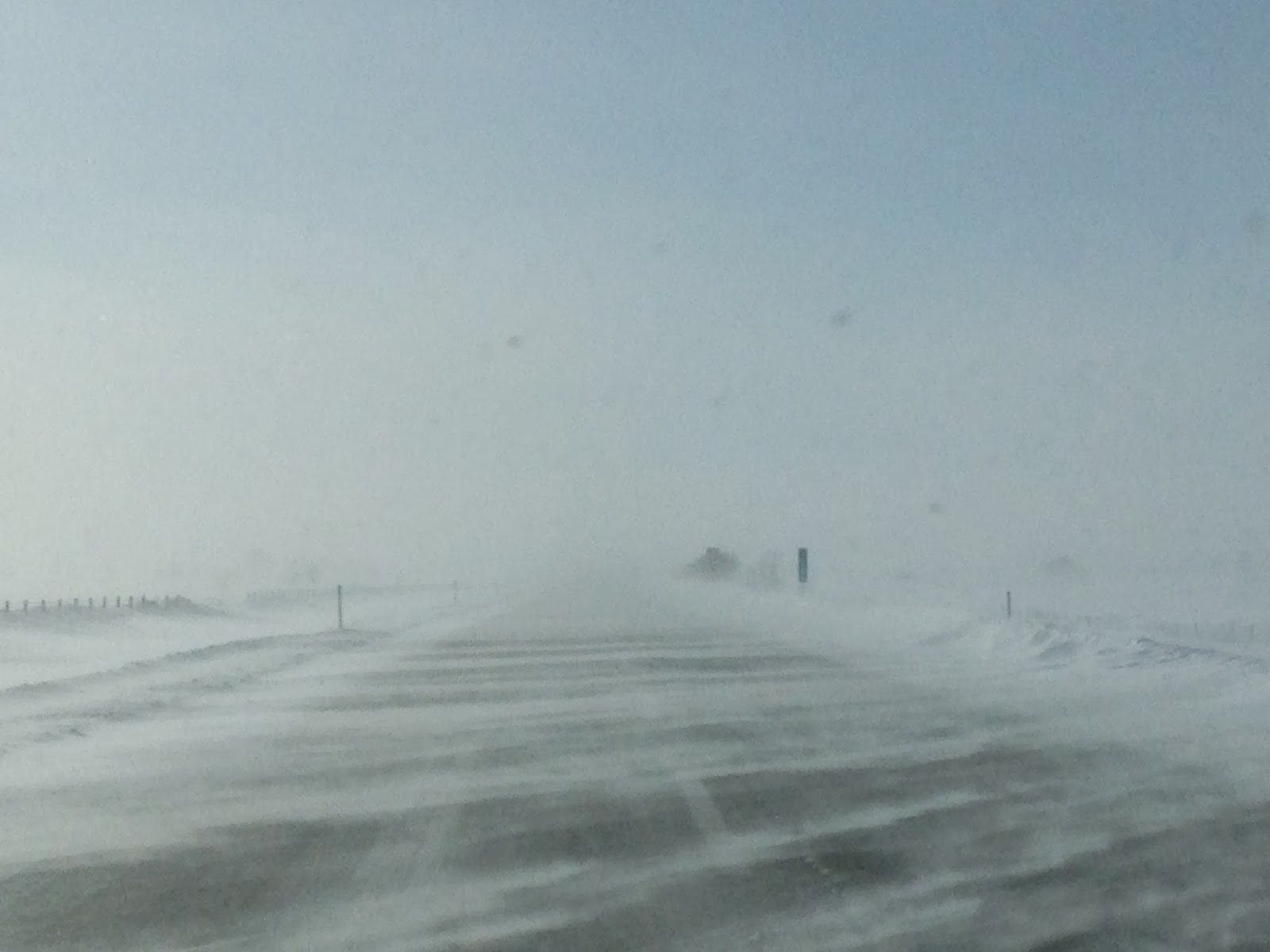 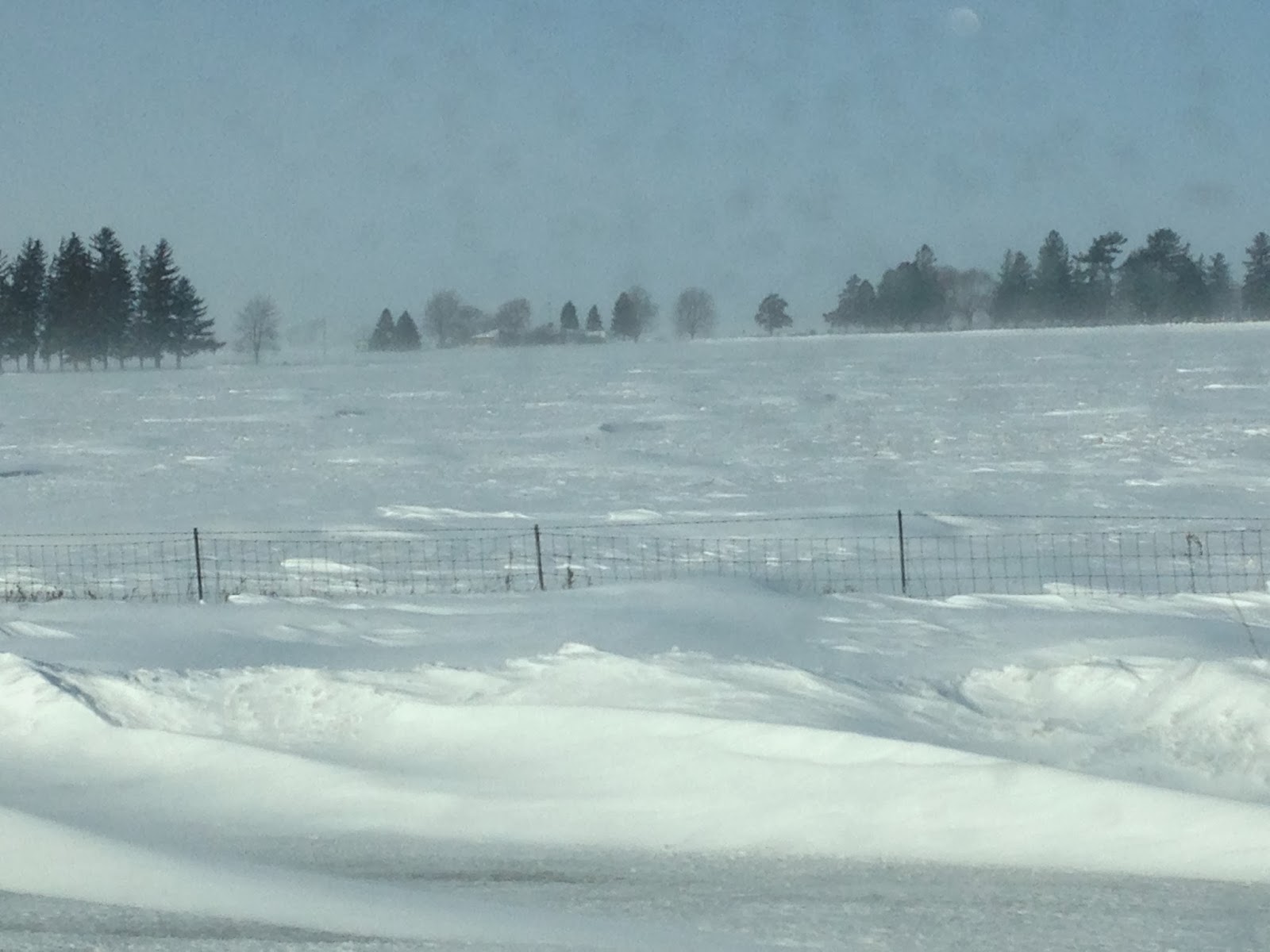 Blowing snow across the highway and a totally frigid landscape. But it was nothing compared to what we'd been through!

It was so good to get home, even with the  freezing-way-below-zero temperatures (outside, not inside!). Peter and John braved the cold and went out that evening and brought me home some pretty flowers. 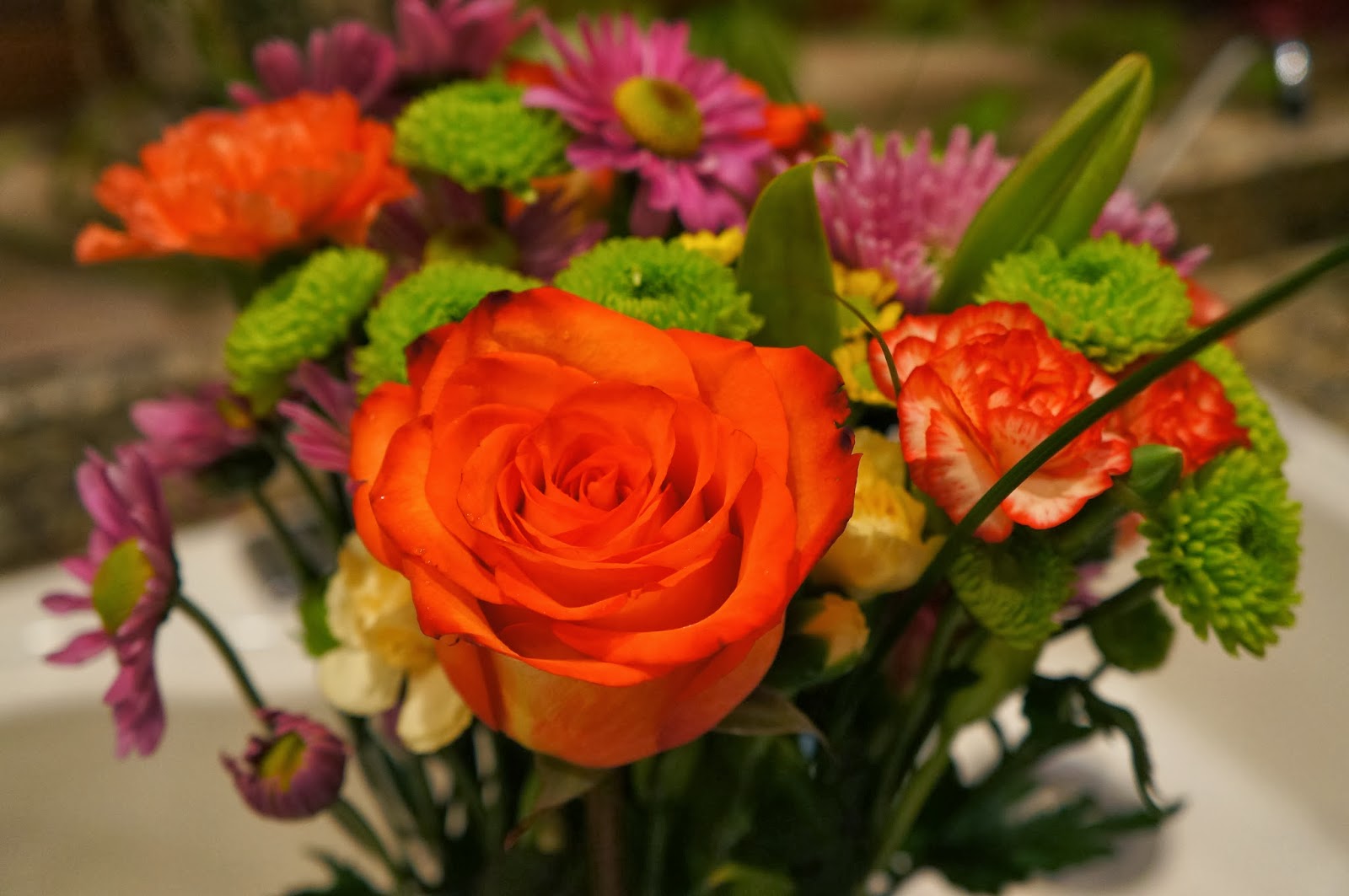 The kids didn't even miss a day of school that Monday because school was cancelled due to the bitterly cold temperatures (Another cancellation! But this was a good one. Even though the cause of it wasn't good!). School was also cancelled for the next day, which was nice because it gave us a day to sleep in, rest, and relax after everything that had happened.

And that concludes this series on our adventures in traveling. In future posts perhaps I'll write about our real adventures in traveling, i.e., what we actually did on vacation. This was solely dedicated to our ordeals adventures in trying to get home. We survived it and we enjoyed our unexpected trip to D.C., and it was worth it go home and see our families, but we've had some bad luck traveling in winter, and we may not do it again for a long time! We have a New Year's cruise in the Caribbean booked for the week after Christmas at the end of the year, and we're considering changing it to another time of year. Unless we ever get our own private jet, and maybe not even then, we're done with traveling in the winter!