1. Mother's Day weekend recap: The hotel stay by myself last Friday night was wonderful. It was even more peaceful, rejuvenating, and relaxing than I thought it would be. I loved every moment of it! And can I just say that Marriott is a class act with its beautiful hotel rooms and excellent customer service. I'm tempted to do these solo hotel stays more often! It was awesome. I get re-energized when I'm able to get time to myself every now and then. And (yes, mom!) it was a nice weekend spent with the kids and Peter once I got home on Saturday.

2. I miss Oprah and her show. I wish she hadn't ended it to start her cable TV network, OWN (which is not doing well, by the way). I think she still could have done a lot with her show, which was well-known, popular, and accessible to pretty much anyone with a television, whether they had cable or not. Plus if she hadn't ended it last year I'm pretty sure I would have been able to get a ticket to one of the show's tapings. I only had less than a year to try for that once we moved to Iowa when it was a lot more likely that I'd actually be able to get to Chicago, but it had to be her final year when it was nearly impossible to get a ticket! But, on the plus side, my DVR has more free space and therefore so does my life. But I do miss the show! Its absence leaves a little empty space in my life. I learned a lot of good things from some of her shows and sometimes they were so funny and gave me a good laugh.

3. I love this moisturizer! It's Clinique's Turnaround Overnight Radiance Moisturizer. 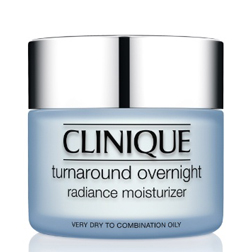 It works so well! I've been using it for a few months at night, and I notice a definite difference in the mornings because my skin looks really clear and luminous when I wake up. And when I get too lazy or tired to put it on before I go to bed for a few nights in a row, my skin doesn't look as good. I think it's even helped to prevent breakouts and has noticeably improved my complexion's overall health and appearance. So I highly recommend this moisturizer to anyone! It's a little pricey but it's totally worth it, and it lasts for awhile since you only use it once a day.

4. I have a little consumer rant to make that's been brewing and stewing for awhile and is ready to be released after I had to throw away about five of John's ties this week. I'm tired of the bias against boys' clothes by retailers, specifically when it comes to ties. I'm convinced that if girls wore ties, there would be a big selection of cute, well-designed, high-quality ties at all of the stores, there would be mall kiosks devoted to ties, and and there would probably even be little specialty shops for them. But girls don't wear ties (not most girls anyway), so those things don't happen.

It's hard to find good ties that are also good quality for boys. It's hard even just to find mediocre ties. The Children's Place sells some nice ties, and I've bought a lot of them there over the last few years for my sons, but they haven't held up well and therefore they're not very good quality. Almost all of John's ties from there have come apart after awhile and can't be knotted together again, or the clasp that holds the tie together has broken (hence the big toss-out this week). Target had some cute ties at Easter in the toddlers' section for the first time that I've seen, so I was able to get a few ties for Sam. I've looked other places multiple times over the years without success, at stores like Gymboree, Old Navy, Gap, and Lands' End. What the heck? Boys should have the opportunity to look nice too! Even if they don't care about that, their mothers do. Do you hear that, retailers?! Maybe I need to start writing some e-mails to the powers that be at these places!

P.S. If you have any good recommendations of places or websites to get good ties for boys, let me know!

*I would include a picture here of John or Sam wearing a tie, but it will take me at least fifteen minutes to find one, and I don't have that kind of time right now. So just visualize a picture of a grinning blond, blue-eyed boy here wearing a tie. :-)

5. Check out this awesome classy flash mob! It's really touching and only two minutes long (though I wish it were longer!). I love the power and beauty of classical music!