Anyone who knows me well knows that I am not a crafty person. I admire crafts and those who do them, but my talents do not lie in that area. Most of the time I'd rather buy something and save the time and hassle of trying to make it myself.

I recently decided to challenge myself, however, by making something to put on top of an overly bare cabinet in my kitchen. I got the idea when a friend of mine from church sent out an e-mail to our list-serv with things that she was giving away, and one of them was a set of pale green glass jars. From there, an idea was born (and copied from a Pier One catalog).

Just like the authentic crafty bloggers do, here are the contrived step-by-step photos of my once-a-year-on-average craft project:

-Valentine's Day and the Inequalities of Love: For V-Day, Peter was very kind to me: I received a dozen beautiful red and white roses, a box of very delicious chocolates from a fine chocolate shop (I ate all 18 of them in two days--and that was with exercising some self-control), a gift certificate to get a lava rock massage, a ruby and silver ring, three cards, and cards, flowers, and a balloon from the kids. And what did I get for him? A card and a couples keychain. I feel like a winner in love but a loser in gift-giving.

-Another sign of my loser-like ways: John came home from school on Valentine's Day with all of the valentines he received, and after he showed them to me I realized that we were the only ones to not include a piece of candy or a sticker or a mini tattoo with the valentines he gave. They were cool Star Wars ones and I got him to write everyone's names out himself; I thought that was enough. Apparently not! I guess I really was an unwitting Valentine's Scrooge this year.

-This week I was sick with a cold and sore throat, so I've been drinking a lot of Canada Dry Ginger Ale. I'm convinced that it has healing properties--my motto is "Ginger ale: it's good for what ails you." (Doesn't my cleverness impress you?) It's my medicine when I get sick. Well, that and Tylenol.

-I haven't gone on Facebook once in two weeks, and I have two weeks left of being Facebook-free. I'm writing an article about it. I miss it! But overall it hasn't been as hard as I thought it would be.

-Spring is in the air! It was in the 40s and 50s this week and yesterday it was in the 60s--in the middle of February! The snow is melting and dripping away and turning into giant puddles. It's awesome!

-My discovery of the week: While shopping in the health food section of the grocery store I found Natural Cheetos! I used to like Cheetos but I haven't eaten them in years because of the junk they're made with. But these natural ones have no preservatives and no artificial flavors and colors. The first ingredient is organic corn meal! They are VERY good!

-One more discovery, though this one is pretty much unattainable unless it's in knock-off form: New York Fashion Week wrapped up this week, and while I don't get into high-fashion too much, I saw this dress featured in an article in The Wall Street Journal and I love it, even though I'm not usually a fan of sequins. It's from Peter Som, and I love the blue color and that it's completely modest, classy, and beautiful. If I were super-rich and led a glamorous lifestyle I would get this dress! 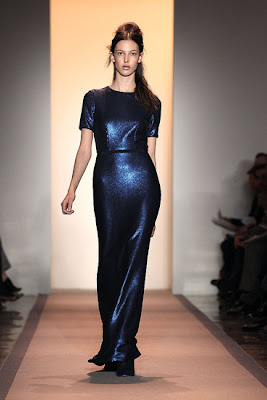 So that was my week; how was yours? As always, if you'd like to read other bloggers' Friday Fragments you can go to Half Past Kissin' Time. Have a good weekend!
Posted by Donna at 8:12 AM

When John Goes to School...

...I let Sam play with all the toys that John won't share with him. 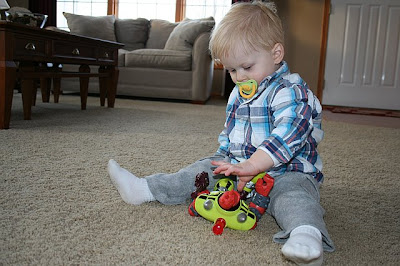 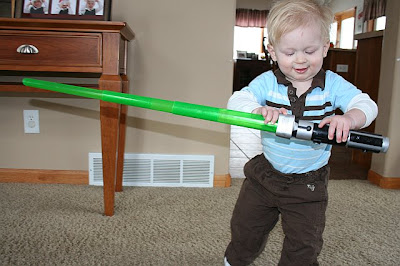 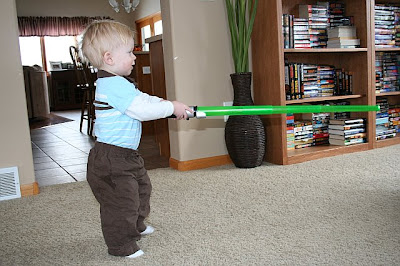 Enjoying the freedom to play without worrying that the toy will get angrily yanked away...it's a beautiful thing. 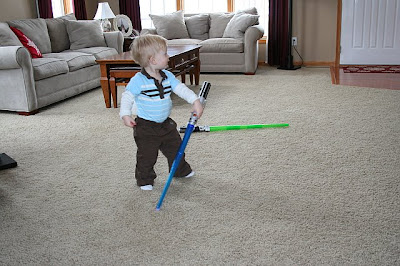 John wouldn't be happy if he knew about this. But as long as he doesn't see this blog post, it's our little secret!
Posted by Donna at 12:40 PM 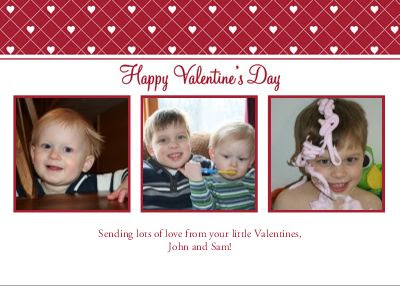 For the first time I made Valentine cards this year to send to my family since we're now living far away from them. A note about the middle picture: when I tried taking some good pictures of the boys together for the card last month Sam wouldn't take the toothbrush out of his mouth. He sure does like his toothbrush! I made this card online at Kodak Gallery. The actual cards are crisp and clear (not slightly blurred like the images are here) and nice and glossy. I love a nice glossy card! Anyway...
I hope you have a Happy Valentine's Day with your loved ones!
Posted by Donna at 10:45 AM

I took these pictures on a beautiful afternoon last fall when I was in the backyard with my kids. I don't know if I've ever seen the sun's rays shine quite so brilliantly through and around the clouds like this. It was pretty stunning. I ran to get my camera and started snapping away. It brings to my mind one of my favorite quotes:
"Heaven is under our feet as well as over our heads."  -Henry David Thoreau. These pictures are a tribute to the amazing heaven that is "over our heads." 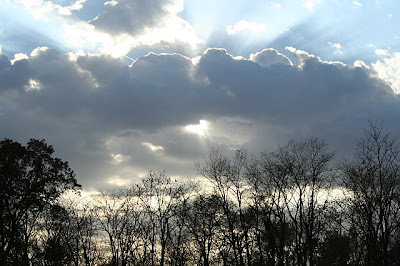 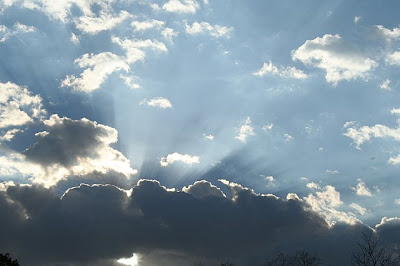 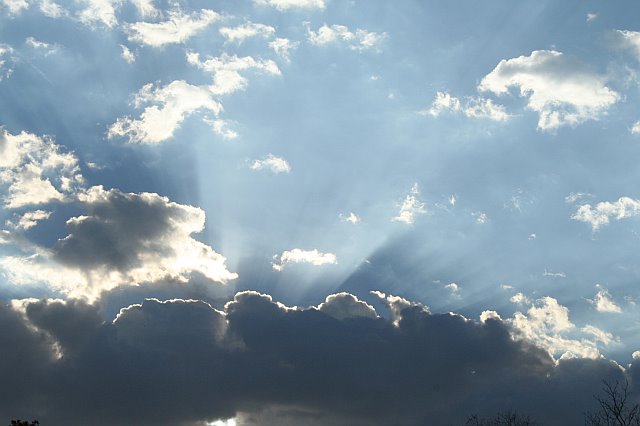 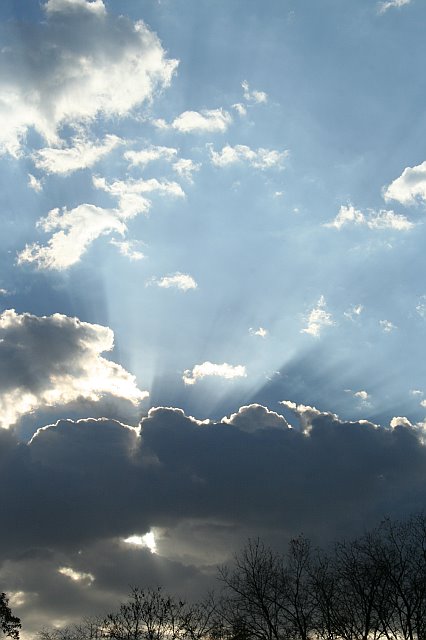 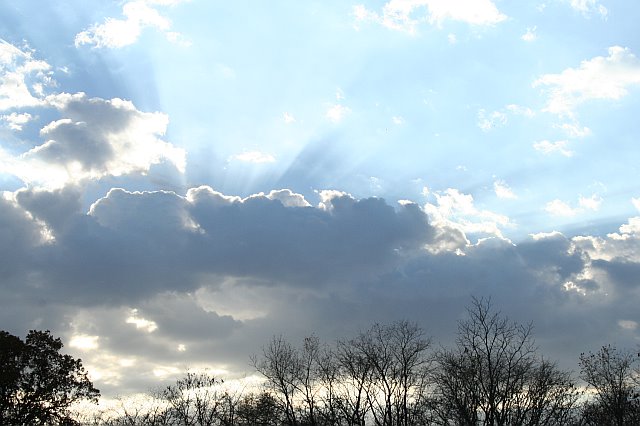 We didn't watch the Superbowl, so we missed all of the commercials EXCEPT for this one, which caught my eye on The Wall Street Journal's homepage this morning because it was one of the most popular from last night. The mini Darth Vader in this commercial is too cute. My 5-year-old son John is going to die when he sees this. Star Wars is his current fascination and obsession. Darth Vader is his hero. He wants to be him for Halloween. Yes, at the young age of five, he has chosen the Dark Side of the Force. May the Force be with us. Anyway, enjoy the commercial!
Posted by Donna at 12:04 PM

My (Random) Experience with the Lunar Eclipse

Do you remember back on December 21st of last year when there was a total lunar eclipse, which hadn't happened on the Winter Solstice since the seventeenth century? I'd been looking forward to seeing it and was planning on staying up really late to watch it. But, as with much of the rest of the country, the sky ended up being too cloudy. I woke up early the next morning and of course by then, only a few hours after the eclipse had happened, the sky was clear and bright and the full moon was shining brightly. 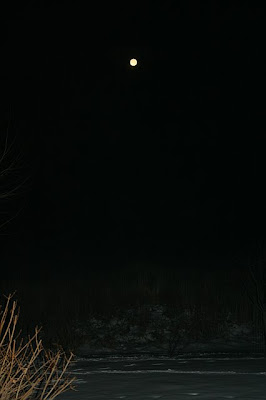 I really need to get a telephoto lens for my camera so that I can get much closer-up shots. Anyway, I took a few pictures of the just-eclipsed full moon while standing out on the front porch in my bathrobe, and then I noticed my neighbor across the street watching me from his driveway, which creeped me out, so I went back inside. And that is the exciting story of my experience with the happens-once-every-few-centuries-on-the-winter-solstice-lunar eclipse. Maybe I'll have better luck next time.
Posted by Donna at 7:16 PM 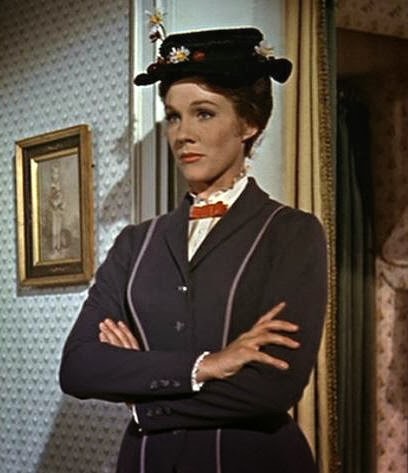 I recently read Mary Poppins by P.L. Travers. You know, the original book that started it all. I bought it when I went to see the Broadway musical on tour in November in Des Moines. I really enjoyed the musical and since it's based more on the book than the movie is, I figured the book would be pretty good too. I was wrong! It was not my "cup of tea" at all (since we are talking British things here). Mary Poppins as written by her creator P.L. Travers is not a nice person. She reminded me of "Scary Mary," a funny YouTube video that I posted on my blog a few years ago. (Click on the link and watch it--you won't be disappointed!) Anyway, the official book review that I wrote is below. Needless to say, I don't think I'll be reading any of the other books P.L. Travers wrote. I much prefer Mary Poppins as done by Disney--through the lens of both my childhood and now adulthood, she was "practically perfect in every way."

I'd heard that the book is a lot darker than the movie, and it sure is! The original Mary Poppins as written by P.L. Travers is mean, impatient, vain, and unlikable. I suppose that is how children were often treated back then but it was still disturbing to read about how sharp she was with the children and with other people. The fantasy/magical elements were fun, although sometimes they were way out there, which made me wonder about what was going on in P.L. Travers' head when she wrote this. I did some research on her and didn't come away terribly impressed. The book kind of ranges from one fantasy to the next until finally Mary Poppins just leaves. It was weird. I'll take the movie version any day, which had a lot more warmth and meaning to it (which, by the way, P.L. Travers didn't approve of. Big surprise there!).
Posted by Donna at 5:23 PM