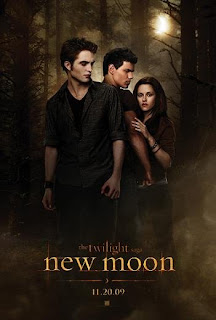 As you may have heard, on Friday New Moon broke the opening-day box-office record that was previously held by The Dark Knight. If it goes on to have the best opening weekend ever, I'm happy to say that I'll be a part of that new record, because I saw the movie today, and (surprise!) I really enjoyed it. I like that it stayed so true to the book. People who have read the series will likely be very happy with the movie. Admittedly, it can be slow in parts--there's a lot of talking in it, so I can see why some movie critics (who obviously haven't read the awesome books!) thought it was boring. The action scenes were great, though, especially the ones with the werewolves. Kristen Stewart is beautiful as Bella, and Taylor Lautner plays a perfect Jacob. (And man, is he ripped!) Overall I'd give this movie four out of five stars, or a B+. I'm in the mood now to re-read the books, and I can't wait until Eclipse comes out next year!
*If you saw New Moon, how many stars or what grade would you give it?