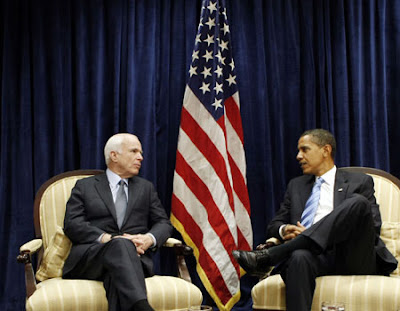 Yesterday John McCain met with Barack Obama in Chicago for about 90 minutes to discuss (what else?) politics and the like. It was the first time they've met with each other since the election two weeks ago. I'm glad they seem to be getting along well now (although now that I think about it, they didn't seem to totally hate each other during the campaign, which is a good thing). I was very impressed with McCain's concession speech on Election Night; it was gracious and he said just the right things. I think I would be a little bit more of a sore loser if I'd put all that time, money, and effort into campaigning for so long. Then again, maybe it wasn't such a bad thing to lose this race. Being President of the U.S. is an extremely challenging, difficult, and even dangerous job. Maybe McCain is a little relieved!
Posted by Donna at 3:10 PM