Some Time at the Prison

Last Saturday morning (Oct. 4th), I had a little bit of extra time between going out to breakfast and taking John to his class at the YMCA. I don't like getting to classes too early, so I killed some time by driving down to Old Newgate Prison, which is near where we live. I took a few nice pictures of the view but not many because I didn't want John to run off the cliff and break his neck, or arm, or leg. He nearly gave me a heart attack when he took of running down the hill.

Come back, you little escapee! 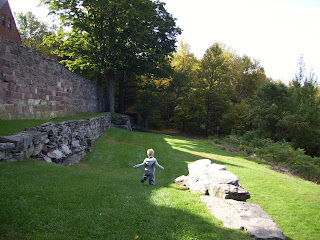 A little history lesson: Newgate started being used as a prison in 1773. Before that it was a copper mine. It housed prisoners from the Revolutionary War, mainly Tories/Loyalists/England lovers. I think it's really neat to live close by to historical sites like this. It makes history come alive, it makes it more real, and it makes it more exciting, interesting, and relevant. And there are few things I like to study, read about, and think about more than American history. I love it! 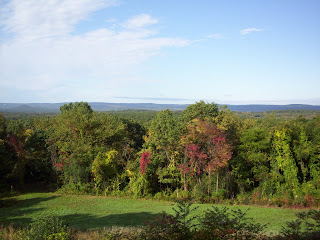 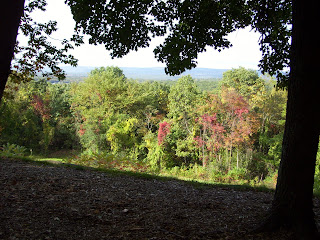 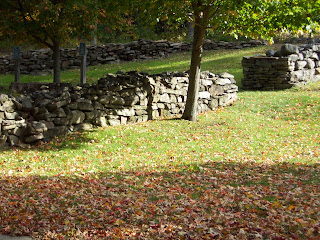 I've always liked the old stone walls that are in New England. I don't see very many of them here in Connecticut, but they're everywhere up in Massachusetts where I'm originally from. They were used as property dividers back in the day. I find it amazing that so many of them are still standing. I don't know if this one has been rebuilt or is the original wall. 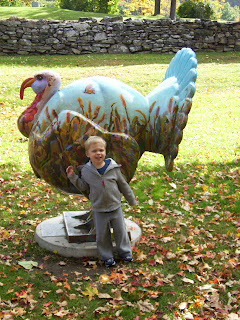 Our town has a lot of wild turkeys that roam around in the fall and especially winter. The town was actually going to be named "Turkey Hills," which would have been cool. These big acrylic turkeys are at different places around town. For civic fundraising, local artists paint them and then local businesses buy them at an auction. Pretty cute idea! (We stole the idea from a neighboring town that does the same thing but with horses.)

It was a nice way to spend a few extra minutes that morning. I need to go back at some point and take a tour of the prison's interior. Who knew that jail could be such fun!