On Friday, August 15th, Peter and I drove down to New York City for our friend Darcie's temple marriage. Darcie was my visiting teacher when I lived in New Jersey. We lived near each other, and we became quite close. When I had stopped working after I became pregnant with John, I went over and got her daughter McKenzie on the bus in the mornings after she left for work. She threw me a lovely surprise baby shower and did many other kind and generous things for me during the years that we lived there.

Darcie married Bill Caycho, a man from the ward who's a really nice guy. It was good to see them so happy together on their wedding day. And Darcie was beautiful, as always.

Being back in New York again was wonderful! It's been nearly four years since I was last there, and I used to go a lot, so I sure have missed it. We drove in and parked in a garage between the temple and Central Park. The Manhattan Temple is breathtakingly beautiful inside. I've been a few times before, but I had forgotten just how gorgeous it is. To think that right outside are the busy streets of Manhattan! You'd never know it in there; it's so peaceful and quiet. I felt very close to the Spirit and to the Savior there, and I was so glad that Darcie and Bill invited us to be there with them. It was the first time Peter and I have ever been to a sealing ceremony, other than our own.

We were in the temple district when the Manhattan Temple was dedicated in 2004. We went to the Open House and to a dedication session broadcast at our stake center. We also got to be part of the multi-stake youth jubilee celebration with President Hinckley at Radio City Music Hall, which was awesome. There's a board behind me in this picture because some remodeling work is being done in the back lobby. 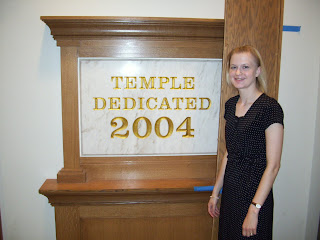 After the sealing ceremony was finished came the "fun" part: driving out of the city and into New Jersey. Can you say Friday afternoon congestion and bad signs?? While Peter tried to find the Lincoln Tunnel, I snapped some pictures of the old familiar streets from the backseat, where I was laid out dealing with my own congestion. (Darn cold!) I miss taxi rides, and I want to do one of these Duck Tours. It's a great way to see the whole city. I know midtown and uptown quite well, but downtown Manhattan is still pretty much a mystery to me. 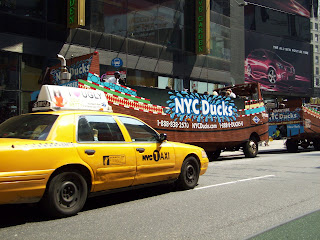 The Joker is in Gotham! 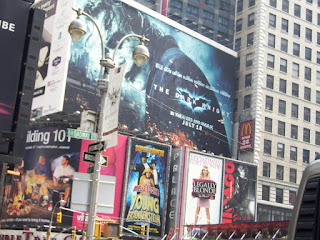 The reception was that evening back in New Jersey, not far from where we used to live. It was so nice to see many old friends from our old ward. I miss it there so much, even though I'm very happy here in Connecticut. Sometimes I wish I could live in a couple of places at the same time. We drove by our old condo complex and some of our old haunts on the way back to our hotel, and it made me feel very nostalgic for the past.

Unfortunately, as I mentioned before, I was coming down sick with a nasty cold, so I didn't get nearly as many pictures as I wanted to get at the reception, and the ones I did get are not that great. I love weddings and I usually take lots of pictures at them, but this time I had to leave early because I felt so sick. Darn it all! Oh well. We had a really nice time at the reception and the sealing. I'm so happy for Darcie and Bill and their new life together!

The newlyweds during their first dance. 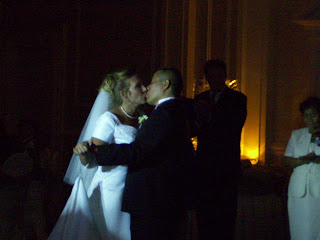 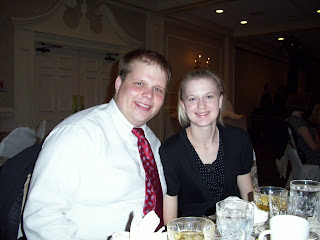