This evening I got to meet two of the people from one of my favorite shows, Ghost Hunters. I still can't believe I've actually met them in person now after having seen them on TV so many times. It was so cool! Here's how it went down...

My friend Alyson called me at around 5:00 this evening to tell me that her husband, Russ, was driving home from work when he passed Pettibone's Tavern and saw a TAPS van out front! (TAPS stands for The Atlantic Paranormal Society. They conduct actual technological ghost hunts and they've caught some of the coolest things ever in a number of their investigations. They've also been able to de-bunk a lot of things.) Pettibone's Tavern is in Simsbury, just a few miles from here, and is rumored to be haunted. When we were house-hunting two years ago, our real estate agent pointed it out to us and told us about its historic haunted reputation. I've been wanting to eat there ever since! Here's the Tavern's website; it has a link about the haunting on it. http://www.pettibonetavern.com/

So anyway, Russ ended up pulling in to the parking lot to conduct a little investigation of his own, and he found Jason and Grant, the two main guys on the show, out back with Kris Williams, a newer girl on the show. He got to meet them and take his picture with them! I am very impressed at his bravery in doing this. He said they were really nice about it all. He also let Grant know in a subtle way that he was a fellow Mormon, which Grant seemed to appreciate. (Russ apparently used Peter's name as an "in" to do this, since we think Peter and Grant are probably from the same ward in Rhode Island.) 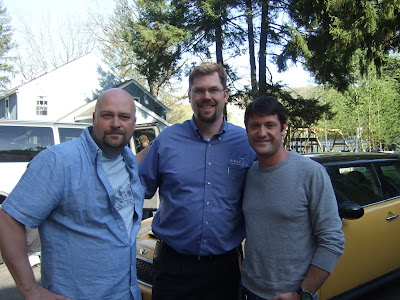 Grant, Kris, and Jason. They seem like such normal people, but they're pretty famous among us ghost hunter wanna-be's. 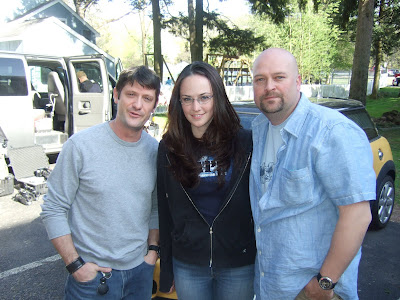 So after that we just had to go for ourselves and check it out. Peter was surprisingly cooperative about doing this, so he, John, and I met Alyson and her daughter Brooke at a Starbucks parking lot in Simsbury and we drove over to the Tavern together. When we were pulling up I saw a TAPS van and a TAPS pick-up truck out front, and I saw Tango! He's one of my favorite guys on the show (he's good-looking, sweet, funny, and from New Jersey, just a few towns away from where we used to live...I know that now after talking to him about it tonight!). Then I saw Kris too. Once we had parked, Alyson and I kind of froze and got really nervous and couldn't leave the car. I was afraid of looking like a dork or getting tongue-tied or being told to go away.
But Peter, ever the fearless one, got right out of the car and walked up to the crew and asked if it was okay if we could come over and meet them. It was really nice of him to do that on our behalf. They were very friendly and said to come on over. So, we did! I got to meet Tango and shake his hand and it was great to be able to tell him how much I enjoy the show. I liked that Alyson asked him about doing the Analysis, because he's always good about doing that when it looks like such a cumbersome, difficult thing to do. He was very friendly to us and I was so impressed with him.

Then Kris came over and one of the crew members took a picture of the group of us in front of the TAPS van. It was so cool! As we were leaving, one of the crew thanked us for watching the show, which I thought was a gracious thing to say. The whole thing took less than five minutes. We didn't get to meet Jason and Grant and Steve (I think they were filming inside the tavern at the time), but I'm thrilled to have met Tango and Kris. Besides, we've got the Rhode Island-Mormon connection with Grant that is still waiting to be pursued, so our experiences with TAPS may not be over yet. (Sorry, TAPS!)
Here's my new favorite picture! From left to right: Tango, Alyson (don't they look like buds?), Peter, John, me, Brooke, and Kris. I'm going to frame this picture! 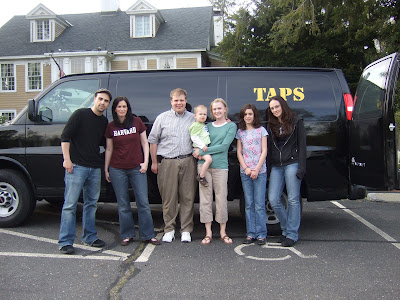 So now I am an even bigger fan of the show. Not only does it have a fascinating concept behind it, but the team and the crew are genuinely nice people. It was very exciting to meet them, and it's a thrill that they're investigating just a few miles away. They're probably conducting their nighttime investigation of the Tavern right now as I type, in fact. I'm looking forward to seeing the episode when it airs, probably sometime this fall. What a totally awesome experience this was!
Posted by Donna at 10:15 PM