The Month in Review: February

February went by fast! It was a pretty busy month for us. It started out sadly with a couple of tragic events: President Hinckley's funeral, and soon after that, Rob Price, a friend of ours from our college days in Philadelphia, passed away. Also, Mitt Romney dropped out of the presidential race, which was depressing.

On the upside, we got together socially with friends a lot more often (I'm making progress with that resolution!), and it was really fun to do that. Another resolution I've been working on is cooking better meals. I'm getting into the habit of planning out the week's meals every Sunday, and as a result I've been eating more nutritiously and John is eating a better variety of foods too. And I got a number of to-do list things taken care of and a few projects done this month (Resolution 5...if I can achieve it this year, then I'll be able to "Live the life you've imagined"--Henry David Thoreau). Valentine's Day was good with its truffles and roses and romance. Also, we got recessed lighting installed in our kitchen, making a significant, very nice difference over the old-fashioned light fixtures that were in there before.

The biggest thing that happened in February was that on the 20th, John started preschool. I'm happy to report that it is going very, very well. We decided to start him in a program now rather than in the fall as previously planned because he's really ready for more than what I can give him at home and in our other activities. The kid seems to be pretty darn smart with some amazing skills, but I'll write more about that soon. He loves the preschool. He's going to Miss Lisa's Montessori School in Simsbury, and he really likes Miss Lisa (or "Miss Weesa" as he calls her in his little-kid accent). He hasn't had any separation anxiety at all, no tears, nothing. Even Miss Lisa is surprised by how quickly and effortlessly he's adjusted. He's such an easygoing, affectionate, friendly child with people. He goes three mornings a week, and we're all really happy with how well it's going. Our little boy is growing up so fast!

These are the best new discoveries I made in February:
1. Skinny Cow ice cream sandwiches. Delicious and healthier than the normal kind!
2. Multigrain Tostitos. Ditto the above.
3. GoodReads, a fun social networking site for friends who like to read. http://www.goodreads.com/
4. Dearfoams house slippers. I really like wearing these around the house. I got the blue ones. http://www.dearfoams.com/detail.aspx?ID=76
5. Dr. Frank's Joint Pain Relief Spray for Dogs & Cats. My beloved Christy will be 13 in May and since she's got a lot of German Shepherd in her and because she's kind of old, she's been having some arthritic joint pain. I saw this advertised on TV a lot and finally figured it was worth a try. It's a homeopathic remedy that you just spray in the dog's water bowl once a day. It really seems to be helping her; she's much more like her usual self again! http://www.petpainspray.com/
6. Eliza Magazine, for women who like to dress well in fashionable, cute, modest clothes.
http://elizamagazine.com/about.html
7. I finally figured out how to use the DVR. Yeah! It's so convenient!

Here's what I'm looking forward to in March:
1. John's 3rd birthday on the 8th and the family party we're having that day for him at our house.
2. Finishing getting the kitchen remodeled.
3. Daylight Savings Time beginning (on the 9th) and the first day of Spring (on the 20th).
4. Easter.
5. The Family History Conference in Franklin, Mass., which I'm hoping I'll be able to attend since I really want to get into family history work this year.
6. Warmer temperatures and nature coming back to life (hopefully!).

Last but not least, here are my favorite photos that I took in February that haven't been posted on the blog yet (so this excludes all of my awesome flower pics).

Why do I get the feeling that I'll be seeing a lot more of this kind of expression directed my way in the years to come? 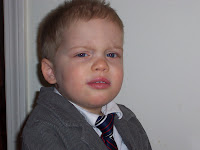 I think he looks so handsome in his tie and blazer. 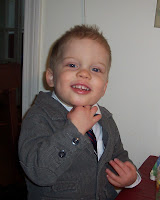 John loves to get his back massaged by Peter. If Peter stops, John says "More please." 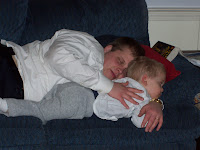 John and Hayley (his cousin and my neice) at my grandma's house in Massachusetts. John is serenading her with "The Twelve Days of Christmas." 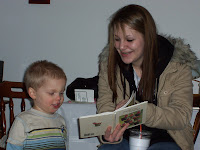 He was stuck behind the couch and trying to climb back up. It was funny to watch! 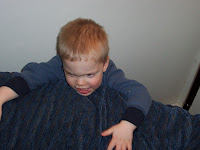 John was obsessed with the book "A Fish Out of Water" for most of the month. That's what he's reading here. 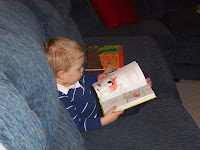 Here's John at breakfast on the morning of his first day of preschool. 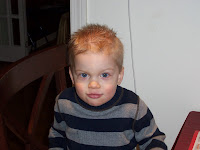 Looking out at the snow. 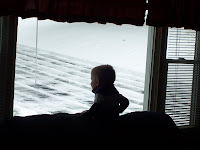 On Feb. 29th I babysat for my friend Alyson's two youngest kids for a few hours while she and her husband went to New York City to go to a taping of Conan O'Brien. John and Adam are only a month apart in age, so they're buds. 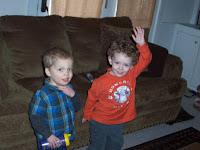 Blindsided by a hug! 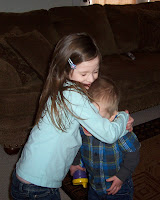 Group hug! I just love Caroline. She's in my Primary class. I was holding her and rocking her back and forth and she said, "Sister Carlson, I don't want you to go home. You're the bestest babysitter in the world." Aawww! 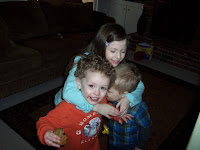