This past Saturday evening, on January 5th, Peter's Grandma Cost passed away from multiple myeloma (bone cancer). We knew she didn't have much time left, but we were saddened and surprised by how quickly it came. We just saw her two weeks ago on the day after Christmas, and she was so much like her normal self. I would never have thought that the next week she would be gone. I'm so glad we went to see her that day and that we talked about significant things, like her family history and what life was like when she and Grandpa Cost were younger, instead of just trivial small talk.

One of the cool things about Grandma Cost is that she's a direct descendant of a now-prominent couple who came over on the Mayflower, John Howland and Elizabeth Tilley. Their descendants include many well-known people, including President Bush, the Prophet Joseph Smith, Franklin Delano Roosevelt, Humphrey Bogart, Ralph Waldo Emerson, and Henry Wadsworth Longfellow. I'm looking forward to researching the exact line that she, Peter, and John are descended from. I was planning on doing that for her before she died, and I can still do it for her even though she's no longer here.

I've always thought of Grandma Cost as a classic New Englander. She was polite and friendly; she was also a firecracker who wasn't afraid to tell you exactly what she thought. She dressed well and always looked nice. She loved her grandkids and great-grandkids and opened her home and her heart to them. The family gatherings will no longer be the same without her there and it's difficult to realize that she's not going to be around anymore. We're so glad to know that it's only good-bye for a little while, and that she's in a wonderful place right now.

This is the first time John met his Great-Grandma Cost, when he was almost 4 months old, in June 2005. 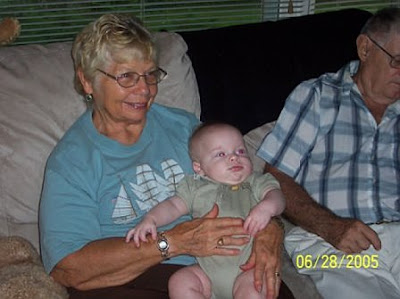 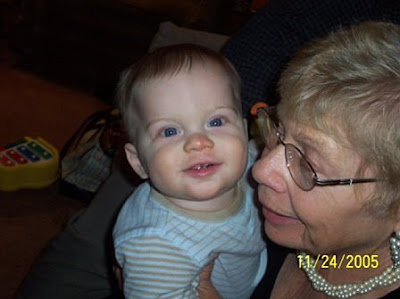 Grandma and Grandpa Cost. They were married for almost 60 years! 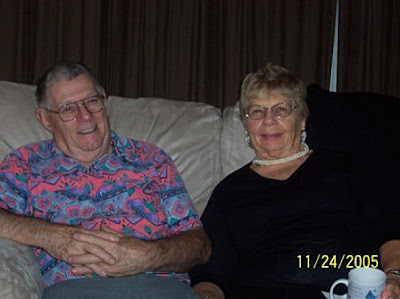 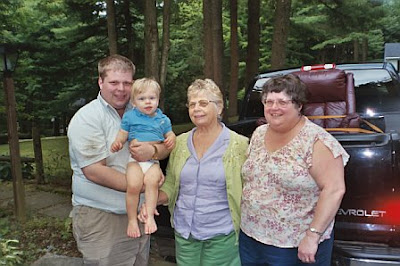 And, mostly for my own records, but an interesting read nonetheless, is her obituary that appeared in the newspaper: