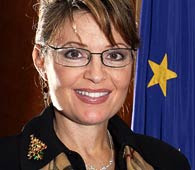 It's funny - this morning Peter and I were talking about the V.P. candidates, and I told him that McCain had to choose a woman. When I heard that Romney and Pawlenty were out of the running, I was pretty sure he was going to do it too. It's a smart strategic choice to choose a woman; instantly his ticket becomes a historic one if they win, which puts the Republican ticket more on par with the Democratic ticket.

I just watched Sarah Palin speak at the announcement of her being "the chosen one," and I like her. (I'd never even heard of her before today.) She's the first-term Governor of Alaska, and before that she was a mayor. She's the mother of five children, including a baby boy just born in April. I like the way she talks and looks--she seems very familiar to me and probably to many other women in the country. She seems smart, confident, and charismatic. One of her nicknames is "Sarah Barracuda" because of her tenacity and fearlessness.

I think she's going to get pounded for lack of experience, particularly with foreign policy, but McCain balances that. In the end, I think choosing a woman as his running mate is going to help McCain's chances of winning. Condi Rice, who has been my choice for awhile, would be better in many ways, but I'm sure her ties to the unpopular Bush administration were too much of a liability.

A few other quick things: